While the Detroit River has been

to inspire their futures

I learned about the Underground Railroad

I learned about, like, the plankton in the water

and I learned about climate change.

PROFESSOR OF ENGLISH AND COMPARATIVE LITERATURE

University of Michigan College of Literature, Science, and the Arts

The Detroit River Story Lab is a new initiative

at the University of Michigan that partners with local organizations to help local students reconnect with the river,

recognize the river as the source of their own local community’s heritage,

claim a sense of ownership in the river, and to find inspiration in the river and its stories of their own future educational and career pursuits.

I didn’t really think Detroit was all that special at all.

I really thought it was just a regular place, nothing special, no history for real. But it’s a lot of history to Detroit.

They need this in the community, more kids need to be a part of this.

students explore the cultural and

environmental heritage of the region

and the kids, they live in Detroit,

so they need to know about Detroit.

You may have an interest in doing stuff as a career, working with the river, 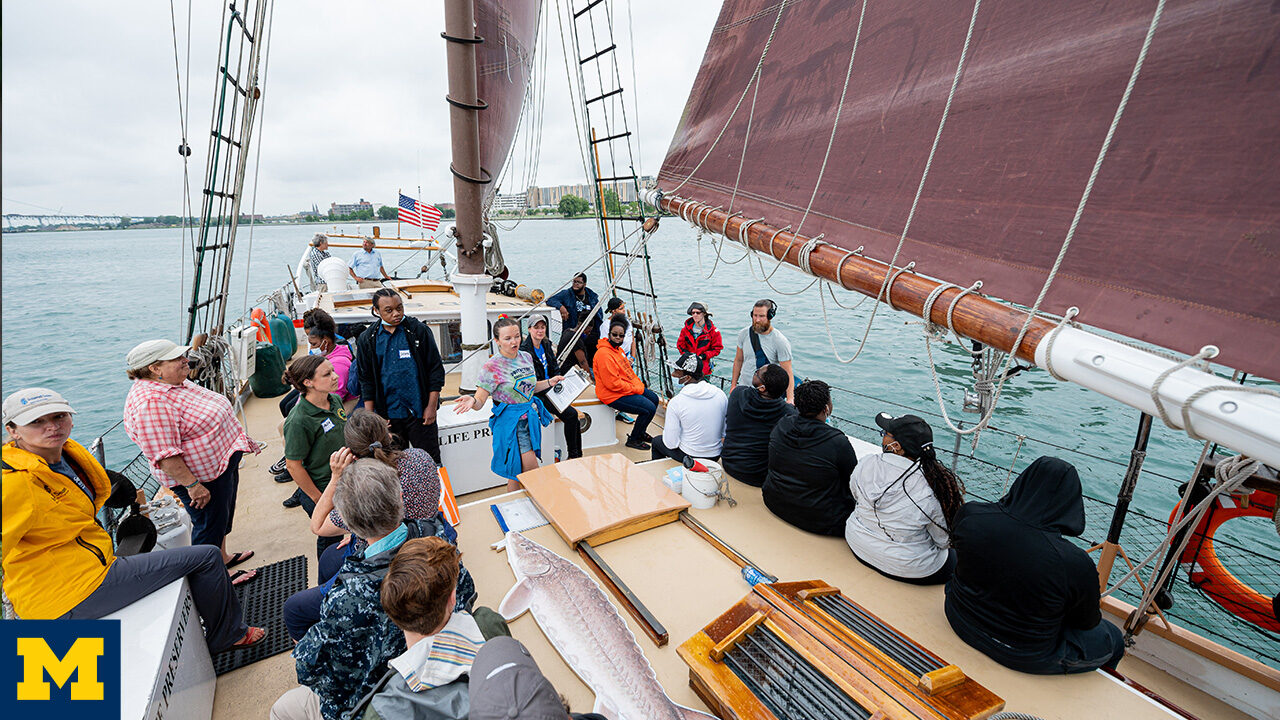 Helping to hoist the sail on the tall ship Inland Seas was a unique experience for Leya Phinisee, a sixth-grader from Flint. She and her dad, Jason, joined one of the three educational sail outings aboard the 77-foot schooner on the Detroit River that the University of Michigan sponsors for local nonprofit groups in the summer. “I learned about the plankton in the water, and I learned about climate change,” she said. “I went on a sailboat today, and it was super cool.” 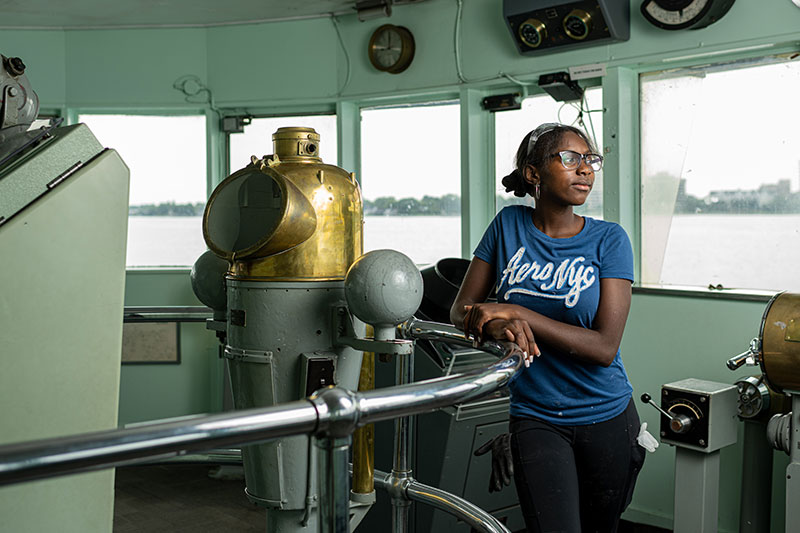 The sail outings, arranged as part of a new Skiff and Schooner program piloted by U-M’s Detroit River Story Lab, included learning stations devoted to the physics of ship construction and buoyancy, river ecology, the carbon cycle, and the river’s role in the history of the Underground Railroad. The lab partnered with several community groups including Communities First in Flint and Healthy Kidz in Detroit for the trips.

Staff from the Traverse City-based Inland Seas Education Association taught the science-based lessons, while U-M faculty and local community experts provided the historical content. Between hoisting plankton nets and testing the acidity of water samples, participants learned how to raise the anchor, steer the ship, and exchange horn signals with passing freighters. A second river-themed mini-course, conducted in partnership with the Dossin Great Lakes Museum on Belle Isle, taught students how to build 12-foot wooden skiffs similar to those historically used on the river and throughout the Great Lakes for fishing and transportation. The week-long workshop provided local high school students a chance to develop problem-solving, teamwork and skills while immersing themselves in the environmental and cultural heritage of the Detroit River.

“The very first day when we first built the boat, it seemed so easy. But the measurements and cuts had to be perfect,” said Strawberry Burrell, 17, of Detroit. “It’s not really that difficult building a boat… It’s just something you’ve got to learn.”

Bruce Ross, deputy director of the Green Door Initiative in Detroit and a former Department of Natural Resources employee who helped to organize the workshop, said the boat building exercise is all new for the students, many who have never been on a boat. 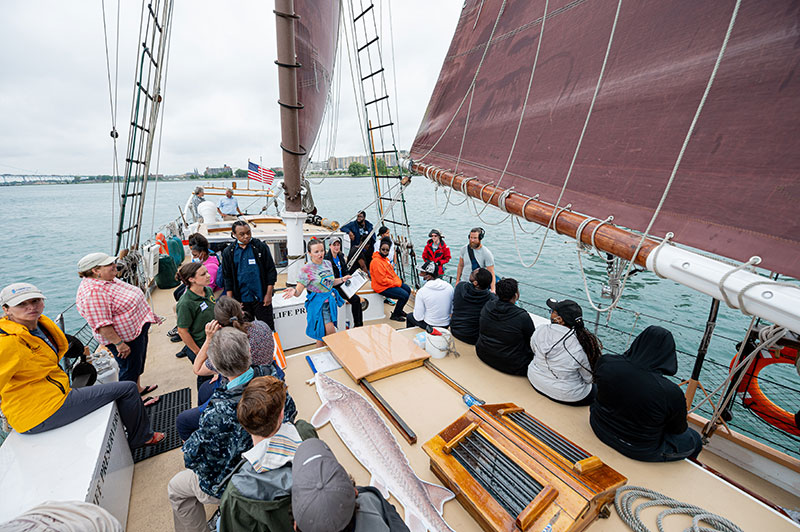 The schooner Inland Seas takes Detroit and other students on a sail along the Detroit River. Students, along with some help from staff and volunteers, conduct scientific tests, and learn about local history.

“But the other key thing to this too is that they’re learning about the Detroit River,” Ross said. “I think the key point with this is working with the University of Michigan and I’m all about relentless collaborative action to help these kids and increase their quality of life. By doing all this work that the kids are doing, I think it’s really helping to increase their quality of life, but also exposing them to new opportunities.”

The Detroit River Story Lab started in fall 2020 with grant-funded partnerships and several multidisciplinary courses devoted to amplifying the international waterway’s long and deep store of sustaining narratives, past and present. 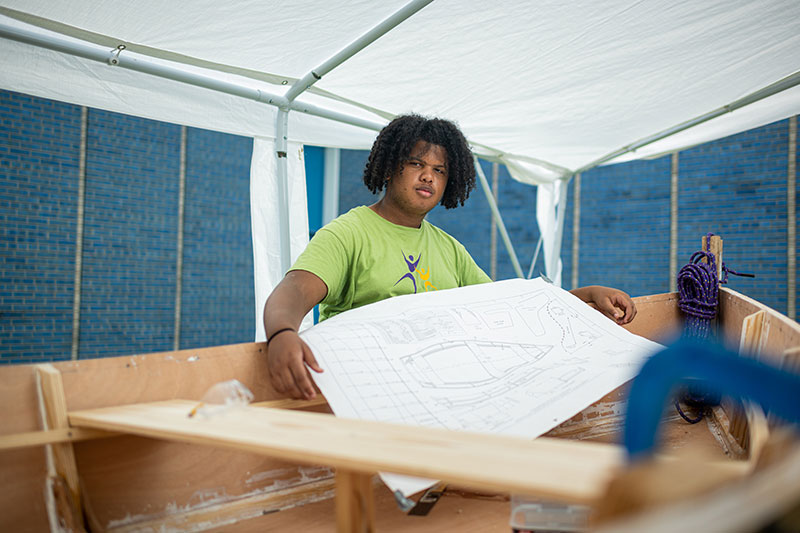 As envisioned by David Porter, professor of English and comparative literature, the multiyear project spans both sides of the river and collaborates with organizations — including the Detroit Historical Society, the Detroit River Project, Planet Detroit, and the state  Department of Natural Resources–on projects that reconnect communities with the river and its stories. 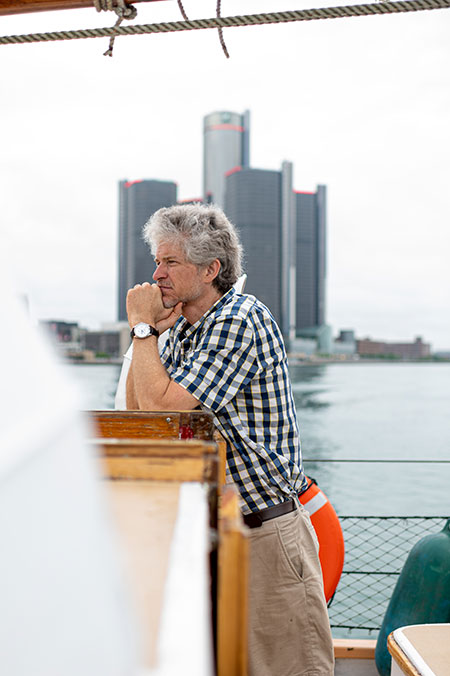 Professor of English and comparative literature David Porter on the schooner Inland Seas.

In addition to Porter, the Story Lab is led by faculty members representing several U-M schools and colleges:

The Detroit River is saturated with stories. Designated as a Heritage River by both the U.S. and Canadian governments, the river and its wetlands were once vital habitat for fish and wildlife hunted by the People of the Three Fires and immortalized by their legends.

Over the past four centuries, the region has attracted fur traders in search of beaver, missionaries seeking a passage to China, and enslaved people seeking a passage to freedom. It has served as the battleground of empires, the stage of anti-colonialist revolts, a highway for commerce, and a sewer for industries that buoyed the economic fortunes of our state. Its presence accounts for Detroit’s deep historical associations with the Underground Railroad, the auto industry, Roosevelt’s Arsenal of Democracy, the Great Migration, and the Clean Water Act, as well as the University of Michigan, first established in the early 19th century just several blocks from its northern shore. Iconic sites along the city’s riverfront, from Windmill Point to Fort Wayne, embed microcosms of these historical contexts that help shape, to this day, the identities of adjacent communities.

“The project sets out to develop creative ways to leverage the resources of the university community to help research and amplify stories of the Detroit River, and to make the rich history and current challenges facing the river and adjoining communities more present, more palpable, more real,” Porter said. “For a long time, the importance of the river to the history and identity of our region has been underrecognized.” 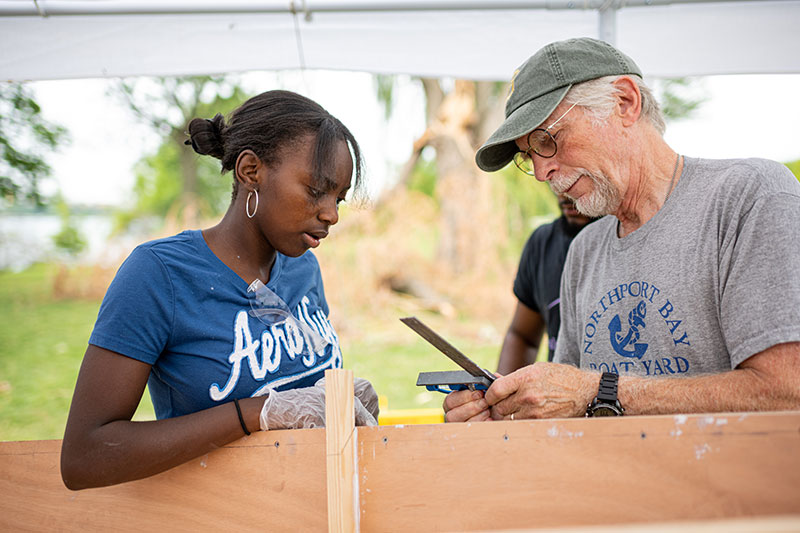 Strawberry Burrell (left), a resident of Detroit, and Detroit River Story Lab participant, works with a volunteer building a boat that the students will test in the Detroit River.

Porter said that the idea to create the U-M project was inspired by the ongoing work of multiple local organizations. One of these came to his attention when he stumbled upon a news story about Kimberly Simmons. She is the executive director and president of the Detroit River Project, a public history nonprofit, and a local activist, historian and Underground Railroad descendent who became an early collaborator on the project.

“One of the more eye-catching objectives of the Detroit River Project is to secure UNESCO World Heritage Site designation for the river on the grounds of its role in the Underground Railroad,” Porter said. “As a vision, I find this incredibly compelling as a way to make the river’s story more accessible and meaningful to more people.”

Simmons shared some of her family history with students who joined one of the Inland Seas outings last summer. She contributed to the 2016 book “A Fluid Frontier: Slavery, Resistance, and the Underground Railroad in the Detroit River Borderland.”

In partnership with the Story Lab, Michigan Engaging Community through the Classroom at Taubman College has coordinated several courses to focus on the Detroit River’s history. MECC brings together U-M students from different disciplines to work on stakeholder-based community projects.

The Story Lab team received several grants over the past year to help support the efforts of various organizations invested in the future of the 28-mile river and its adjoining communities. Their long-term goal is to build a sustainable bridge between U-M research and teaching projects and these mission-driven organizations. 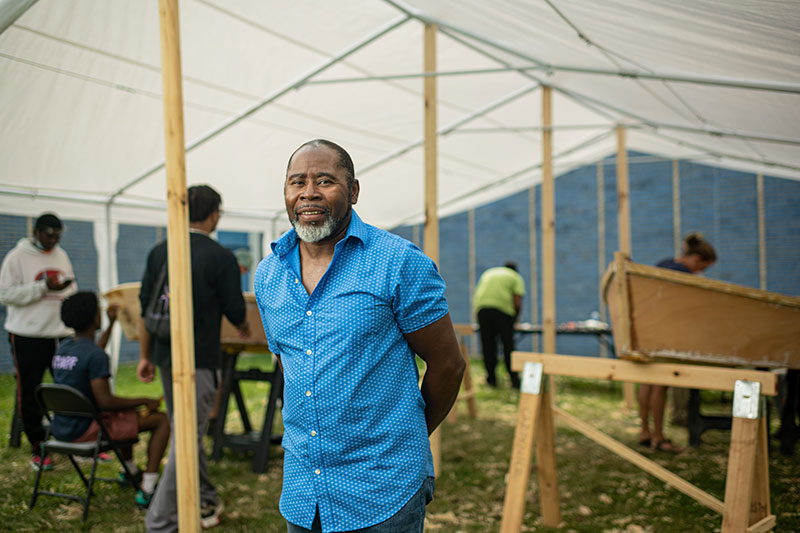 “The lab has a community-first orientation,” Porter said. “The idea is to serve as a shared resource hub for faculty and students from across the university who are drawn to story-amplifying efforts along the Detroit River and inspired to co-develop new models for placed-based research, teaching and public engagement activities in that space.” As one example of its collaborative approach, the lab partnered with regional scholars from the Detroit River Project and the Essex County Black Historical Research Society, curriculum development experts at the U-M School of Education, and local teachers to develop an experiential curriculum on the history and enduring effects of the Detroit River’s role in the Underground Railroad for middle and high school students in Michigan and Ontario.

It was piloted as a 3.5-week unit through UM’s Wolverine Pathways in July; the development team plans to field test the curriculum in Detroit and Windsor middle schools in next year. 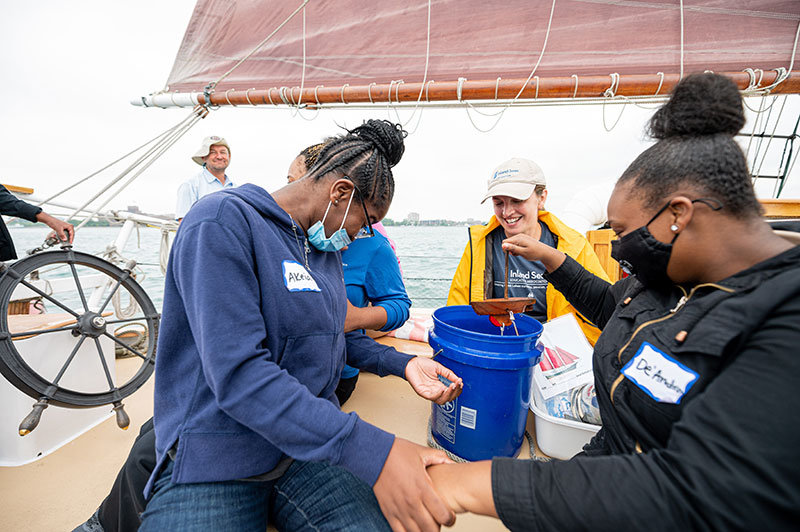 The schooner Inland Seas takes Detroit and other students on a sail along the Detroit River. Students, along with some help from staff and volunteers, conduct scientific tests, and learn about local history. Here, students test the stability of a model boat.

Graduate student researchers with the Story Lab have also worked with the Detroit River Project to advance the group’s longstanding efforts to secure a UNESCO World Heritage Site designation for the Detroit River. The team helped prepare an overview of site designation protocols, an interactive digital map of 100 riverside public heritage sites — many related to the Underground Railroad, and a resource guide of the regional history of the Underground Railroad, emphasizing histories of struggles for freedom in the Detroit River borderland.

Another kind of storytelling partnership, this one between the Story Lab and  the community-based journalism nonprofit BridgeDetroit, took shape through a series of conversations with Managing Editor Catherine Kelly. These resulted in the grant-sponsored appointment of U-M PhD student Surabhi Balachander as a summer intern with the magazine to research and produce long-form river-related media stories on themes connected with social equity and environmental justice. 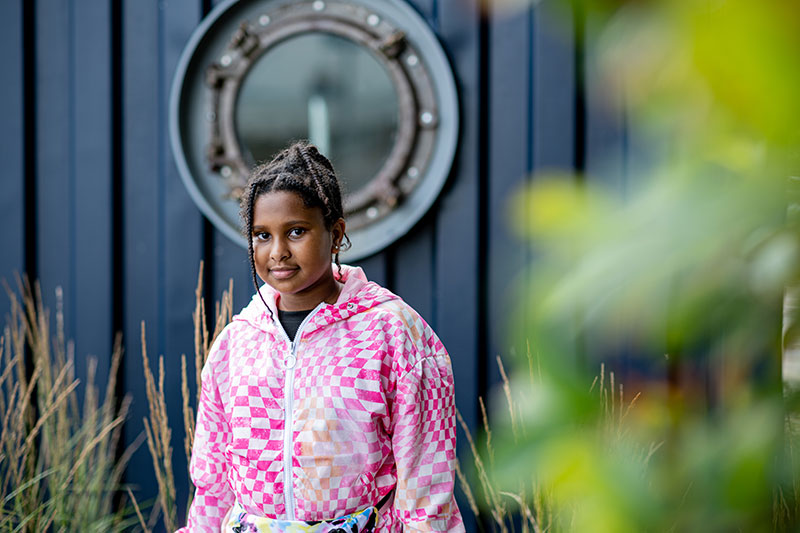 Leya Phinisee, a resident of Flint, and Detroit River Story Lab participant near the Detroit River after sailing on the schooner Inland Seas.

For Strawberry Burrell, a high school senior from Detroit and a participant on one of the tall ship outings and the boatbuilding workshop, the Story Lab’s efforts gave her the opportunity to learn about her hometown in a way she’d never experienced before.

“I didn’t really think Detroit was all that special at all. I really thought it was just a regular place, nothing special, no history for real,” she said. “But there’s a lot of history to Detroit. They need this in the community. More kids need to be part of this.”