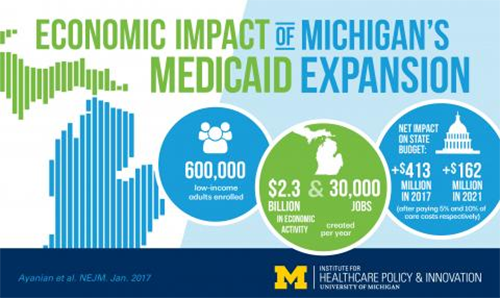 Michigan’s expansion of Medicaid health insurance coverage has boosted the state’s economy and budget, and will continue to do so for at least the next five years, according to researchers at U-M.

The expansion’s total economic impact will generate more than enough funds for the state budget to cover the cost of the program in the current fiscal year, the researchers report in the New England Journal of Medicine.

The expanded Medicaid program will continue to have this self-paying effect even as the state’s share of its cost increases every year until fiscal 2021 under federal law, they project. Over the next five years, the state will end up with more money in its coffers because of the program than it actually spends on the program.