WHEN A STRUGGLING FAMILY IS
TORN APART
BY CRISIS

AND OFTEN,
KIDS GET PLACED INTO
FOSTER CARE

Ashley Burbanks – mom
My ex-husband was extremely, physically abusive. So after having my kids involved in it and seeing what it was doing to them, I got a divorce. And then I hooked up with the law clinic to get his parental rights terminated.

I had to go through all of Child Protective Services stuff. Having them taken away was extremely hard for me. The students really vouched for me and, you know, really helped me.

Vivek Sankaram – Director, Child Advocacy Law Clinic, Michigan Law
The families that our clinic serves have often experienced the type of trauma and pain that no one should experience. We represent kids who’ve been placed in foster care, parents who have had kids taken away from them.

GETTING TO KNOW
FAMILIES’ SITUATIONS
THEY RESEARCH
LAWS AND OPTIONS

AND THEN PRESENT THEIR CASES
TO THE COURT SYSTEM

Elliott Gluck – 3rd-year law student
You need to kind of get a sense of what their day to day is and then help them with our skills and their skills combined to solve the problems that are in front of them.

[Ashley Burbanks]
The court process was — it was difficult.

[Vivek Sankaram]
And by getting to know the parent in the way that our students do, they then can narrate that story to judges and caseworkers to get systems to be much more understanding and sympathetic to the life that existed in this family.

[Ashley Burbanks]
When the judge came back and said that he was terminating his parental rights…
I think that was probably one of the happiest days of my life.

Timothy Connors – Presiding Judge, Washtenaw Peacemaking Court
They bring to the table the values of peace making. The great thing about having the Child Advocacy Clinic is we get the best minds in the country and the biggest hearts.
So they have absolutely elevated the quality of representation.

CALC HAS REPRESENTED
THOUSANDS OF PARENTS,
RELATIVES AND CHILDREN

MANY ARE NOW LEADERS
IN NONPROFITS,
GOVERNMENT AGENCIES
AND PRIVATE FIRMS

[Vivek Sankaram]
I have students who think they can change the world. They are really changing lives and changing systems just by having that relentless optimism.

[Ashley Burbanks]
They’re lifesavers. I mean, there’s no other way to describe it. 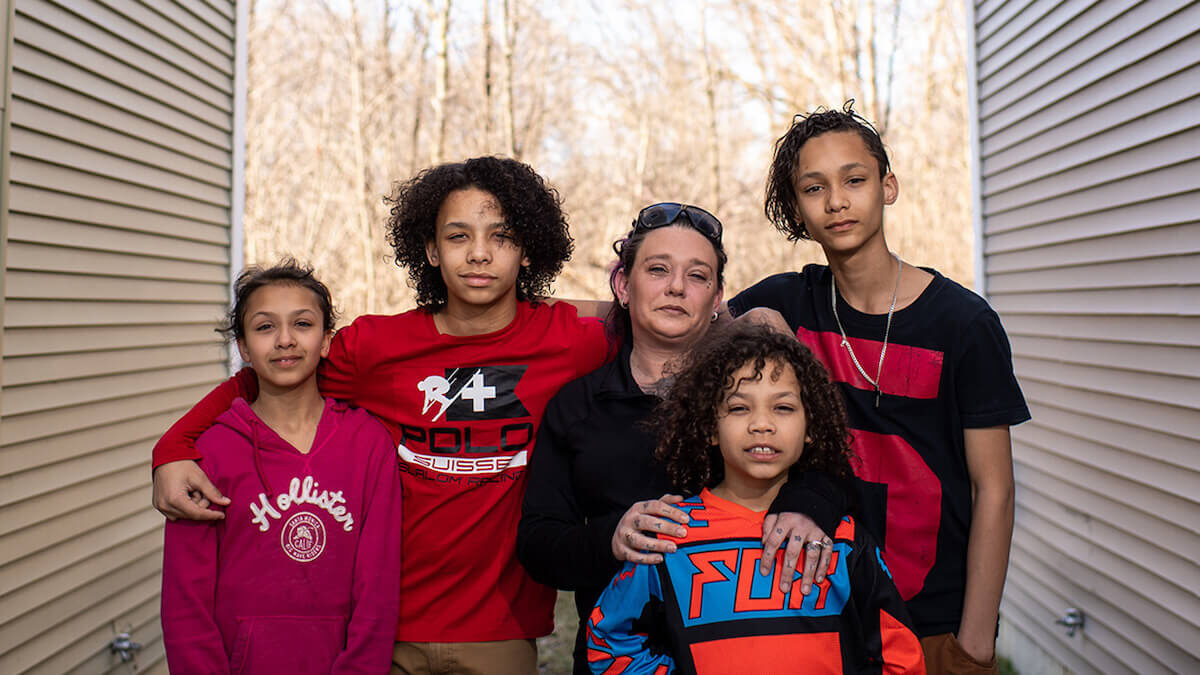 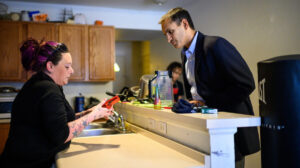 The bag, with a 6-inch tear on top, is next to the kitchen island, visible to family and guests who enter the Ann Arbor home. Burbanks’ boys—Donny, 13, and Gabriel, 12—occasionally punch it because, as their mother says, “they need boxing to defend themselves, learn to take care of themselves, be a strong man.”

Her desire to empower them comes from not feeling capable to defend herself for many years. She is a domestic violence survivor. Her strength now, in part, came from a team at the University of Michigan’s Child Advocacy Law Clinic, which stood in her corner when other legal options weren’t available.

Two clinic lawyers—former students who have since graduated—and its director Vivek Sankaran passionately advocated for Burbanks to regain custody of her four children when Child Protective Services intervened. Gabriel, then age 8, unexpectedly found his mother’s handgun—which she kept for protection against an abusive ex-husband—and shot his younger brother Alan, then age 4, in the head.

Alan survived, but the physical and mental scars remain. The family is still healing and coping daily, but grateful to CALC for reuniting them. 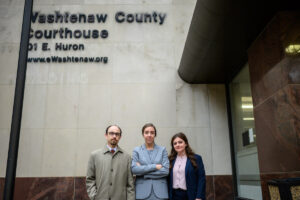 “If it weren’t for them during the time that I was going through what I was going through, I don’t know that I would have made it through,” said Burbanks, as her hands trembled and eyes swelled with tears as she recalled the physical, mental and sexual violence she suffered for years. “Honestly, they really saved me by just everything they did.”

Since its inception in 1976, CALC has tirelessly represented thousands of clients. As the first and oldest clinic of its kind in the country, its lawyers mainly represent children in the foster care system. Michigan is one of several states that allows law students, under the supervision of law faculty, to take the lead role in representing clients.

Second- and third-year law students handle cases, gaining experience as future lawyers under Sankaran’s guidance. Nurturing their interest in child advocacy, the dozen or so students enrolled in the clinic perform the same tasks as lawyers: interview clients, file motions, pore through legal documents, take the case to court and make decisions. 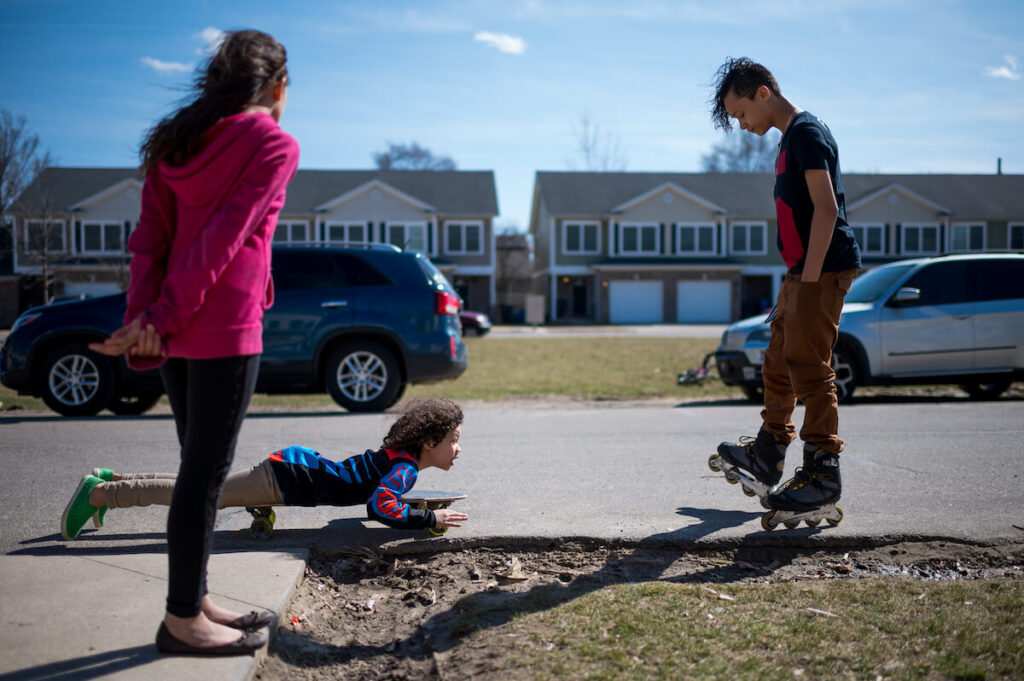 “They are everything to me.”

All of this happens while taking classes to prepare them for what to expect in court. Sankaran notes that the clinic and classes also address the legal, social, emotional, ethical and public policy questions of when and how the state ought to intervene in family life on behalf of children.

Elliott Gluck, a third-year law student, describes CALC as one of his best experiences in the Law School. The work makes a difference by reuniting families, he says.

“Building the relationship with clients … that is the most important part of the clinic,” said Gluck, who will move to New York in September to work at a law firm. 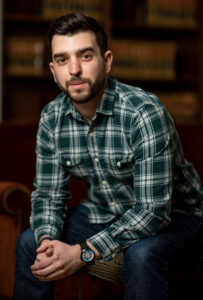 The clinic’s value in providing high-quality representation shouldn’t be underestimated in a profession where lawyers are sometimes overworked and underpaid. Sankaran speaks with pride about his highly motivated students, who he describes as being “passionate about their work.”

Sometimes those qualities are needed when families, who typically get referred to CALC by the courts, are concerned about students—not veteran lawyers—representing them.

“It’s not uncommon for families to be skeptical, but I hear back from them after the cases saying ‘I’m so happy that a law student represented me,'” said Sankaran, a 2001 U-M law graduate who also directs the Child Welfare Appellate Clinic. “The families feel that they are heard.”

“Honestly, they really saved me by just everything they did.”

“That’s the story that people miss,” he said. “Students can share that narrative with judges.”

“The clinic’s students do a good job. They have access to resources most attorneys don’t have,” said Behm, a 1994 U-M Law School graduate who worked in a law clinic involving landlord/tenant cases. “The program not only trains lawyers in this area of law but improves the system as a whole.”

For instance, since the students each handle one or two cases, they have more time to devote to clients. In addition, Sankaran and colleague Joshua Kay, clinical assistant professor at CALC, are frequently available to assist the court with cases.

Behm pointed to a case she handled involving a girl seeking to be placed with her father in Mississippi. Sankaran used his contacts to have the father’s home evaluated—which was required by the state for placement—and the process only took a few weeks rather than six months.

For Burbanks, former law students Dani Angeli and Alanna Farber vouched for her that she had completed parenting classes, which eventually allowed Burbanks to regain her children after three months apart. 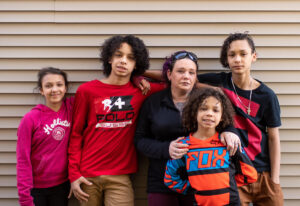 Burbanks says she’s relieved that her ex-husband—who she divorced in 2012 after eight years of marriage—is in jail for other charges. She has since sought and was granted a request that his parental rights be terminated for their children, which also includes 11-year-old daughter Shylah.

Burbanks is helping the kids adjust emotionally at home and in school, but also plans to get them professional counseling.

In the meantime, her children enjoy kicking a ball, riding skateboards and playing games with other neighborhood kids. And if they want to let out any frustration or simply sharpen their boxing skills, there is always the black heavy bag near the kitchen.