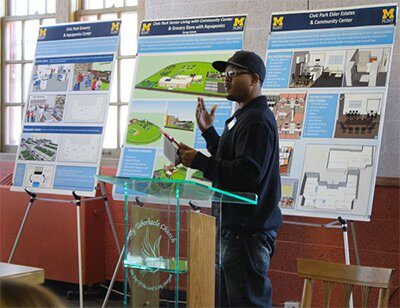 University of Michigan-Flint resource planning and social work met in April to present their proposals for revamping vacant sites within the Civic Park neighborhood.

Following their oral presentations, the students received highly supportive comments from residents of Civic Park, a North Flint neighborhood that emerged around 1918 with rapid new housing construction during the rise of the auto industry, and has struggled during decades of decline to regain its character as a strong, welcoming community.

Senior housing, a community center, baseball and soccer fields, a concession stand, a community garden, gazebo, mobile farmers’ market and a small park and pavilion were some of the project ideas that students presented.