Strike up the band: 400+ U-M alums teaching ‘more than music’ in classrooms across the state

The University of Michigan
attracts top musicians from
around the world

[THIS IS MICHIGAN – JACKSON]

U-M alumni are leading
music programs
across the state

I did my master’s program at U-M. They had great professors there that I wanted to study with, people that I knew would challenge me to, to again, think deeply about like,

why are we doing this and how are we impacting students?

Bryan is a perfect example of someone who has a bigger vision.

DR. COLLEEN CONWAY
PROFESSOR OF MUSIC EDUCATION
U-M School of Music, Theatre & Dance
He just kind of gets it that, yes, we want the best-sounding ensemble that we can, but it’s not really the end goal.

Most of them aren’t in band to major in music. I think they’re in band because they like to achieve something at a high level and to be part of kind of that team aspect.

CHARIS
SENIOR DRUM MAJOR
Northwest High School
Jackson, Michigan
Band is a pretty big part of our school and our community. Our halftime shows are a great moment for the crowd.

Once you’re on that sideline of the field, you stand there and as soon as you

That’s my favorite moment of the year. It’s just seeing them happy because I know the hard work that went into it.

What I love about teaching is just the connections that I make with the students and seeing them overcome some of the struggles that they have.

He is for many people a father figure that they don’t have at home.

KHRYSTINE
ALTO SAXOPHONE
Northwest High School
Jackson, Michigan
He wants to see everybody do well and that’s a sort of a thing like a dad wants.

He connects with the students, he knows all of them and what they’re doing.

DAVID GERADA
ASSISTANT DIRECTOR
Marching Mountie Band
2:06 I marked this too, I think the band is probably Mounties plural, yes? not Mountie?

He sets a very good example for the director I do want to be someday.

He knew how to make our lives better through his teaching.

Logan graduated from
Northwest High in 2017

We’re starting to see second-generation kind of things happening where we’ve got students from their high schools that are arriving at our program, and so it’s kind of coming full circle in terms of our influence a little bit.

I just hope that they’re learning how to be good people and I hope they remember the lessons that we teach.

He teaches tenacity, dedication to the program, high standards of excellence.

And then for him to know that like he’s loved back, I’m sure that feels pretty great as a teacher, too.

Yeah, I think I want to do this the rest of my life. 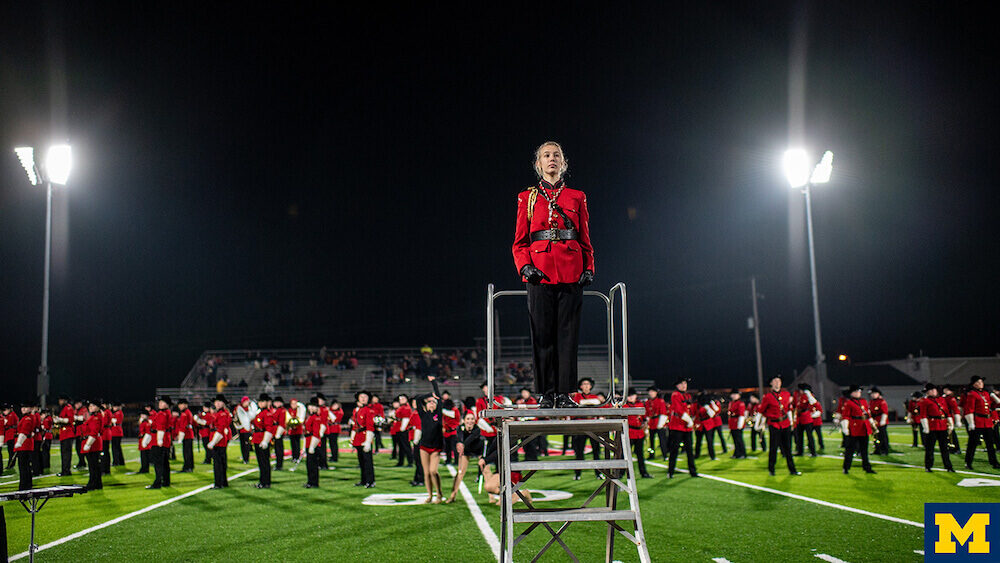 When Bryan Mangiavellano decided to pursue a career in conducting and music education, he imagined leading a large collegiate marching band one day.

Accepting his first job as director of bands at Northwest High School in Jackson 16 years ago was supposed to be the first in a series of steps that would get him there. 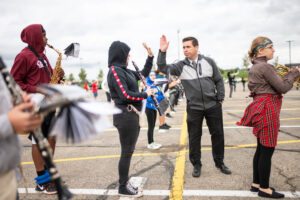 “It really wasn’t long before I realized that I was exactly where I was supposed to be,” said Mangiavellano, a euphonium player who earned his master’s in music education from the University of Michigan in 2011. “I love teaching music to kids, and I love to see the effects of that reflected in both their musicianship and who they become as people.”

“Mr. M” is one of more than 400 U-M alumni currently at the helm of hundreds of elementary, middle and high school music classrooms across the state of Michigan.

The ‘Marching Mounties’ are well known in the region for both their degree of excellence and for their signature mountie uniforms. The band has been a staple in the community for more than 50 years as part of Northwest Community Schools, which is geographically one of the largest districts in the state of Michigan because of the vast rural area it covers. 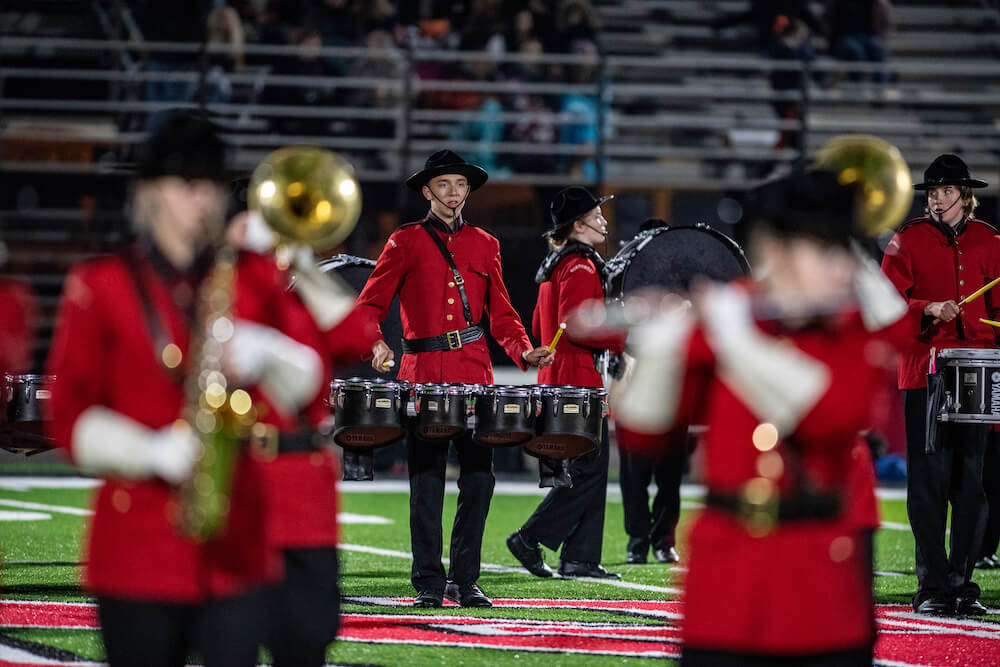 The band includes about 140 students

In addition to his duties in directing the 140-member marching band, Mangiavellano also directs the high school’s jazz band, teaches beginner guitar classes, and assists in teaching beginning brass players from 6th through 8th grade at Northwest Middle School. Each day, more than 250 kids come through his classroom doors.

“He’s so much more than just a band director,” said Logan Frewen, a former student and now a junior double majoring in jazz studies and music education at U-M. “Mr. M was invaluable to my development as a musician and as an educator—what he really taught me was how to develop relationships with my students.”

Frewen, also a Michigan Marching band member who works with several drumlines at area high schools, including at Northwest, gave his mentor a nickname nearly five years ago that can still be heard in the Northwest band classroom today. 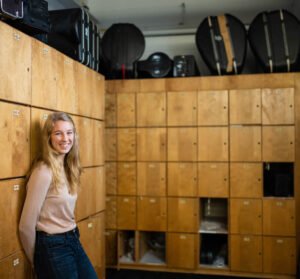 “My friend Zack and I started calling him ‘dad’ one day—it was an ode to his ‘dad jokes,’ but also a meaningful nickname that describes how a lot of people feel about him as the honorary head of the marching band family,” he said.

“Mr. M is a father figure to many of us—he expects a lot of us and wants us to be good, and it is fun when you’re good,” said Cumings, who hopes to pursue a career in music. “But one of the reasons people love and respect him so much is because of his role as a mentor. During my most difficult times in high school, I could just stop by his office and talk to him—he’s such a great listener.”

“He really is the ‘dad’ of the band,” said Elijah Haldane, a Northwest sophomore who plays tenor drums. “He has so many students and he makes time for each one. He’s always checked up on me and asks me how I’m doing, and that means a lot to me.”

“I love teaching music to kids, and I love to see the effects of that reflected in both their musicianship and who they become as people,” said Bryan Mangiavellano, a euphonium player who earned his master’s in music education from the University of Michigan in 2011.

Though U-M boasts one of the oldest music education programs in the country, Mangiavellano began a graduate program in 2007 that was relatively new at the time. Designed specifically for working professional educators, the Master of Music in music education offers teachers the opportunity to complete the program over the course of three summer semesters. 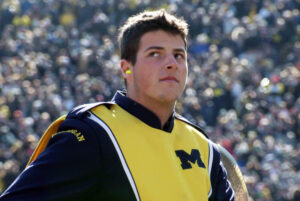 “U-M has a wonderful program with great professors who are at the top of their field—Dr. Conway, Dr. Fitzpatrick, Dr. Skadsem—these were people that I knew would challenge me to think deeply about music ed,” Mangiallevano said. “They really got into the ‘why’ of what we do as teachers.”

Colleen Conway, professor of music education at the U-M School of Music, Theatre & Dance, says that the program launched in 2004 and has become one of the most popular in-state master’s programs for music teachers. 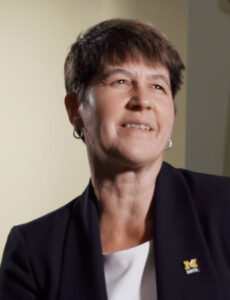 “What’s really unique and attractive about U-M is that we have a high-quality music education department at a top performing arts school, which also happens to be at a leading research university,” she said.

“We get a lot of students like Bryan, who really want to learn how to be better teachers. He is an example of someone who has a bigger vision, he just gets it—as in, yes, we really want to have the best-sounding ensemble that we can, but that’s not really the end goal.”

Mangiallevano says that the last 16 years in the classroom have changed his longview.

“In the beginning of my career, I might have told you that my goal would have been to create lifelong musicians through education, and I know this sounds cliche, but what I really want for them now is for them to be good people,” he said. 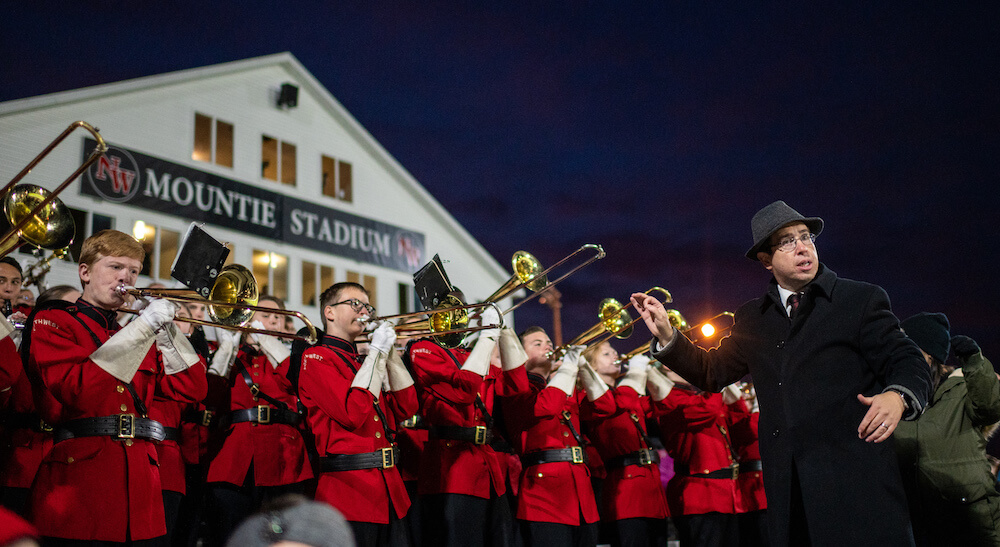 “Yeah. I think I want to do this the rest of my life.”

“My hope is that band has instilled enough work ethic and discipline, so that when they go off to become doctors, lawyers, electricians or welders, that they know how to put in the hard work to be successful in whatever they decide to do.”