Soccer in Motown: ‘Passion for our city, passion for the game’

How do you script the story of an unlikely sport

By writing a chapter about how a soccer team has

provided opportunities to grow and belong

We didn’t invent anything. We just created a space that was long overdue.

The author of the team’s story

is Alex Wright, a U-M alum.

He and four friends decided to

unite people in a positive way

and welcoming to all

We believed that it was time to start telling positive stories about the sport of soccer and about the city of Detroit. Not just tell a story, but start a story. And the way we started our story is that we wanted our sports team to be different.

The Detroit City Football Club (DCFC) began as a

to create a huge fan base

of not just adults but young people as well

We know that if we don’t figure out a way to have our kids be as excited about this game as we are, then we’ve lost, the story’s over. And this needs to be the first chapter of the story, not the last.

I want to be a professional so that when I score a goal, go to the fans and celebrate because it gives me joy.

Three years ago, DCFC expanded its

impact into the community

They leased a shuttered ice rink and

converted it into an indoor soccer facility

The Detroit City Fieldhouse is where our players train.

We play together, it’s fun. It’s also competitive and I feel like we work together.

It gives them an opportunity

to play close to home

We shortened that pipeline from kids just having this pipe dream that maybe one day they can be a professional footballer and now it’s literally next door.

When DCFC came along, it’s been a real gift to see them have access to the kind of programs they deserve.

I think that giving kids a realistic dream is probably one of the bigger impacts.

You know, there could be a kid in this community right now that’s coming to Little Kickers with my daughter. Those kids are the ones who are the future of our club.

This is a classic case of somebody saying to themselves, if you build it, they will come.

Alex’s storytelling skills were taught and

honed at U-M by his mentor and professor

Here was a kid with vision who saw the world in a different way, and when he had his chance, he formed something special in a city he obviously loves.

creation of a unique fan base

They call themselves the

The largest supporter group we have by far is called the Northern Guard.

We’re real and we’re gritty and we’re from here and we’re going to give it everything we can.

(NGS) march together to Keyworth Stadium

They march through a neighborhood

in the city of Hamtramck

It’s a community of immigrants.  It’s extremely diverse, the most diverse in our state. That neighborhood is full of thousands of people, and everyone in this neighborhood loves soccer. It’s the one thing they all like.

Capos are the people who stand on the step ladders in the front of the section and they have the megaphones. That’s the role of the Capo is just to keep it going. It’s to provide that energy.

The energy that extends to a growing fan base

that is both diverse and inclusive

There are people across racial and ethic spectrums. There’s the LGBT community. And so we’re all there with one purpose, we’re supporting the players on the pitch.

The Northern Guard Supporters gave me a chance to become more than just myself, right, to become part of a community and to find that space where people were gathering and organizing and building something bigger than any one of us.

programs to provide services for those in need

Every other week, people are giving out basic needs, clothing menstrual supplies to homeless and at-risk populations. And there’s coat drives throughout the year.

We’re questioning a lot of these assumptions about what sports is, about what a sports team can be, about who sports is for. Our answer to that question is anyone. Sports can be for anyone. 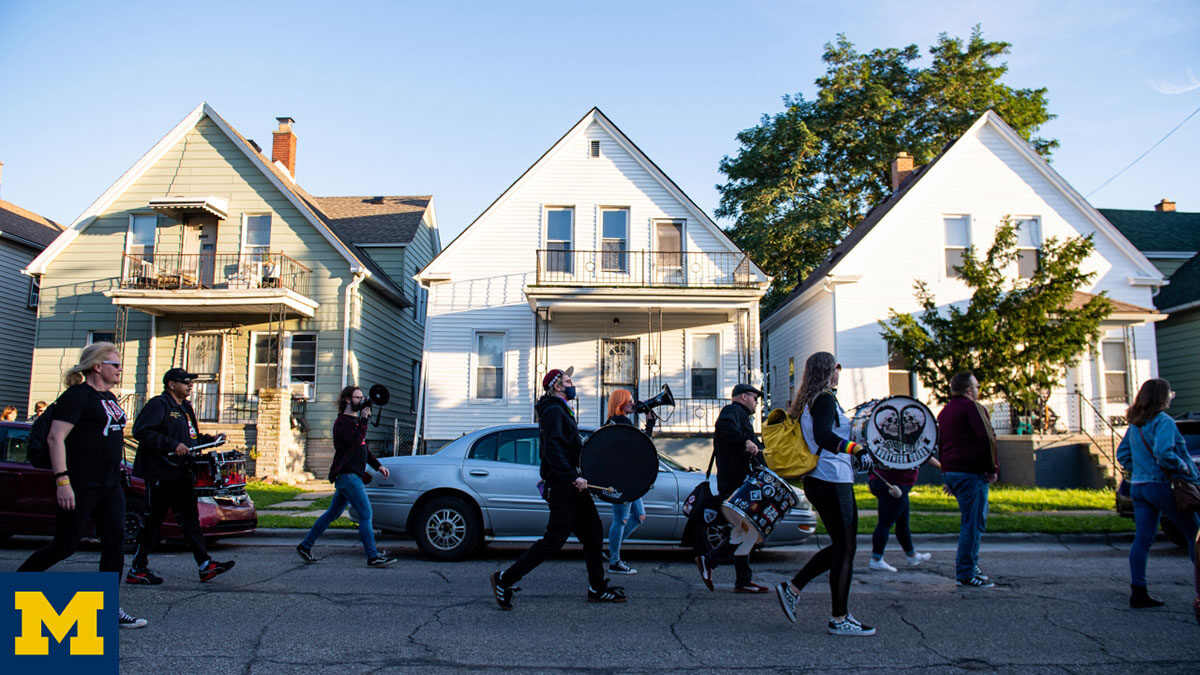 DETROIT—Standing on the sideline at the Detroit City Fieldhouse, Matt Hale beams with pride as his son, Jeremiah, deftly changes speed with the soccer ball, maneuvering around defenders.

Jeremiah, 11, advances closer to the soccer net and kicks the ball just inches from the goalie’s outstretched arms. As Jeremiah celebrates the goal with his teammates, Hale—a married father of five—sometimes thinks about seeing his son’s game close to his Detroit home rather than traveling to the suburbs.

“We have a respect for the club … and having that mutual respect for each other and recognizing how we’re both supporting each other’s growth.”

Plus, he says, it’s easier on his wallet: The cost is thousands of dollars less than what he would pay on many suburban club teams.

“When (the youth program) came along, we were just thrilled to find something that was in the city that a lot of neighbors of ours were playing for,” said Hale, who works for a Detroit nonprofit agency. 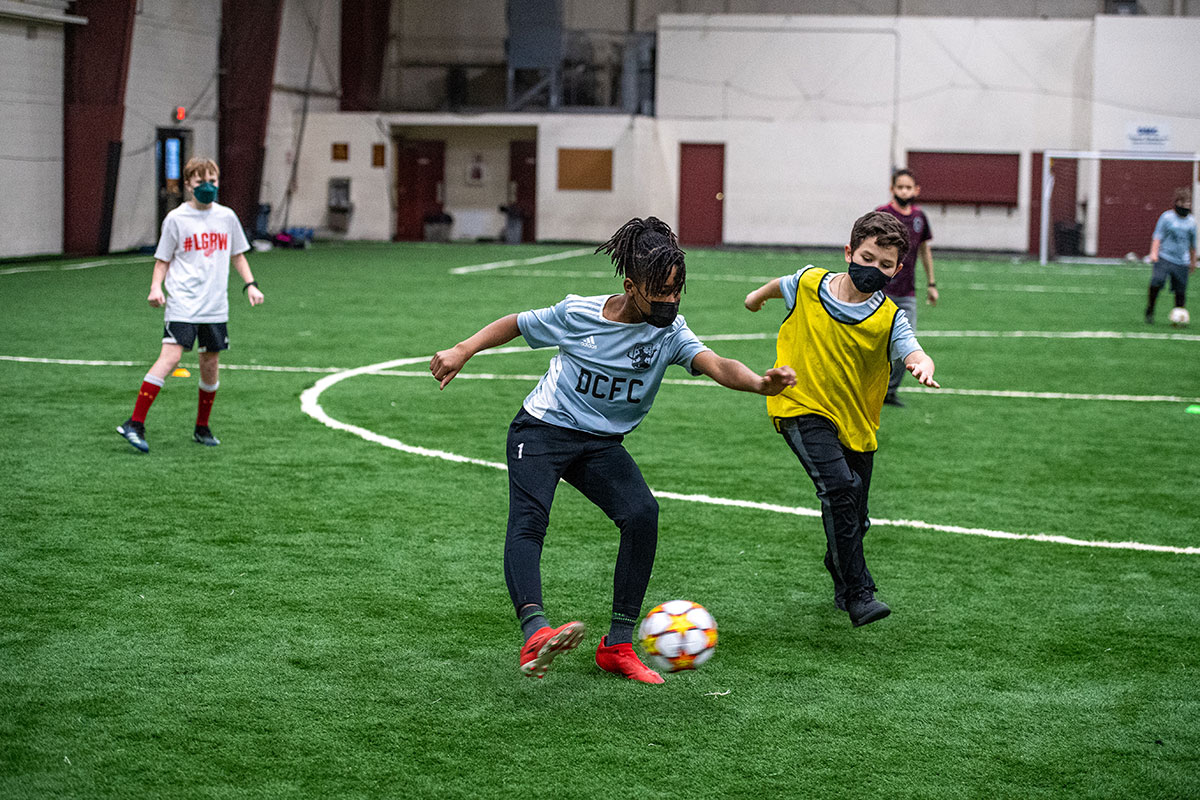 Jeremiah, 11, deftly changes speed with the soccer ball, maneuvering around defenders at the fieldhouse operated by DCFC.

The fieldhouse, located at 3401 E. Lafayette St., is operated by the Detroit City Football Club, an entity that brings residents together with its professional team, leagues and community investment. The club was founded by University of Michigan alumnus Alex Wright and four partners in 2011.

More than 200 kids represent the club in their house “City Select” youth teams, plus another 2,500 youths in the affiliate programs. Hundreds more have access to clinics and classes held during colder months inside the fieldhouse. 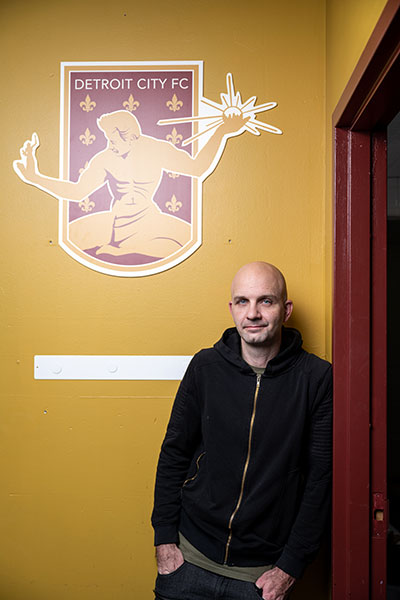 Matt Hale says having his son’s games close to his Detroit home rather than traveling to the suburbs costs him thousands of dollars less.

Detroit’s interest in youth soccer has steadily increased in the last decade with the club’s programs running alongside leagues operated by the city of Detroit and the Police Athletic League. Wright says the club gives families of City Select players affordable access to the team by using proceeds from alcohol sales from the men’s professional and women’s semi-pro matches at Keyworth Stadium in Hamtramck.

“It is connecting kids and families from all over the city that love the game,” he said.

Many league participants also support the club’s professional men’s and women’s teams. It’s not unusual to see fans of all ages enthusiastically chant and march less than a mile to Keyworth Stadium from Fowling Warehouse, a bar that combines football and bowling.

“The crowd energy is something that you just don’t see in American sports,” said Stephanie Munier, a club fan who moved to Detroit from Ann Arbor about six years ago. “It’s the kind of thing you’d expect at a raucous soccer match in the U.K. or in Mexico or in Europe, where people are into the match—body, voice and soul.” 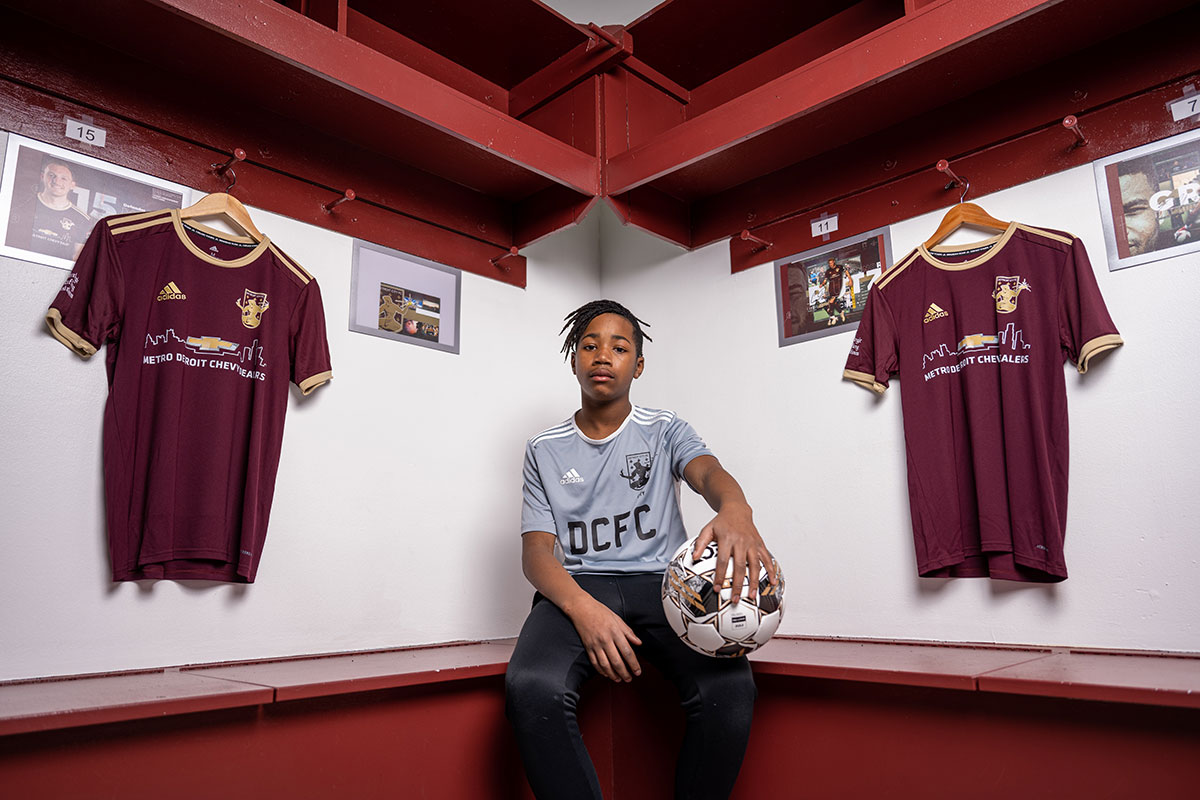 Some fans also give back to the community by donating clothes, health supplies and other basic needs to the homeless and other at-risk populations near Detroit’s Cass Park. 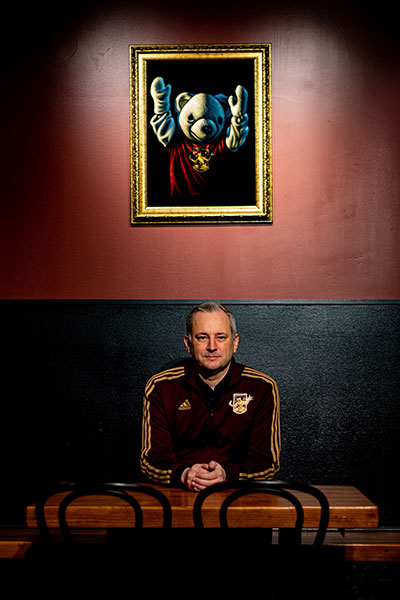 The DCFC was founded by University of Michigan alumnus Alex Wright and four partners in 2011.

“We have a respect for the club … and having that mutual respect for each other and recognizing how we’re both supporting each other’s growth,” said Amanda Jaczkowski, Hamtramck council member who has been a longtime season ticket holder with family members.

The community involvement in the team is what Wright—an accomplished local TV producer—and several friends hoped would happen when they discussed starting a club more than a decade ago.

“It was an idea whose time had come,” he said.

The partners founded Detroit City FC, a minor league soccer team whose motto is “Passion for Our City, Passion for the Game.” The club’s mission was to satisfy the demand for soccer in downtown Detroit, to represent the city in a positive light and to build community through “the beautiful game.” 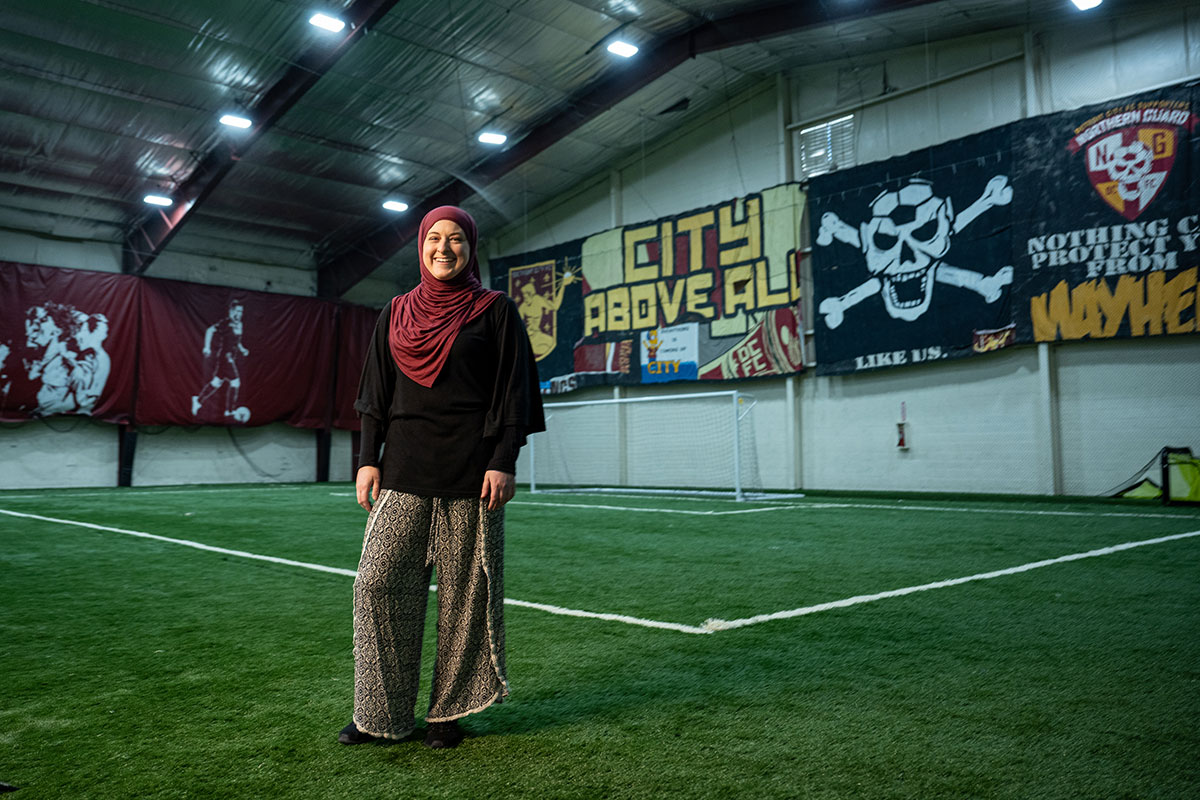 Amanda Jaczkowski, Hamtramck council member, who has been a longtime season ticket holder with family members

The team originally played at the Cass Tech High School football field, where more than a thousand spectators came to the first match. By the third season, game attendance exceeded 3,000 people, creating a need for a larger set up. Team owners found it at Keyworth Stadium in 2015, and coordinated a pledge drive of 527 investors who gave $741,250 to renovate the site.

In 2018, the owners converted an empty 75,000-square-foot fieldhouse for a practice space. The site—which had been occasionally used by the Detroit Red Wings from the late 1990s until mid-2010s—has two soccer fields, club offices and a bar. 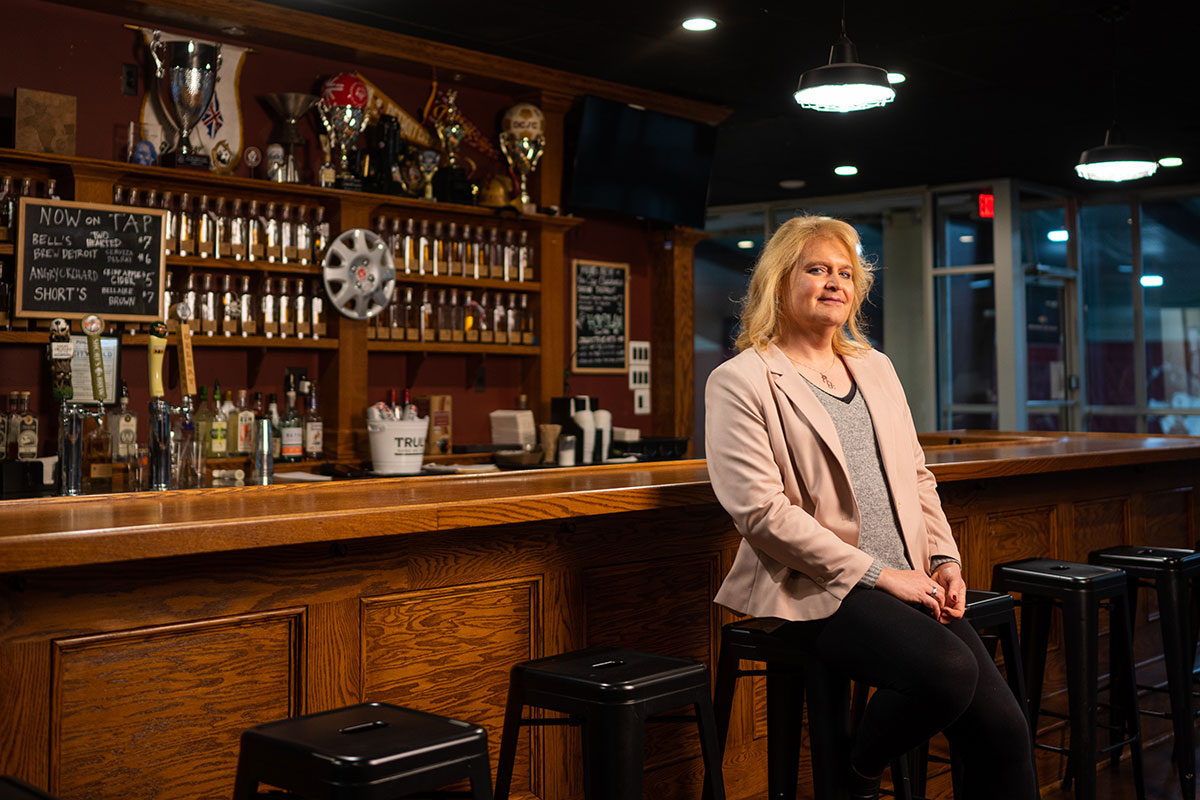 “The crowd energy is something that you just don’t see in American sports,” said Stephanie Munier, a club fan who moved to Detroit from Ann Arbor about six years ago.

Being a team owner wasn’t what Wright envisioned growing up in Detroit and Plymouth. Although he loved sports, his interests involved travel and screenwriting, which led him to the University of Michigan. Wright, who graduated with degrees in Italian studies and film/video studies, credits his mentor Jim Burnstein, director of U-M’s Screenwriting Program, in developing his creativity. 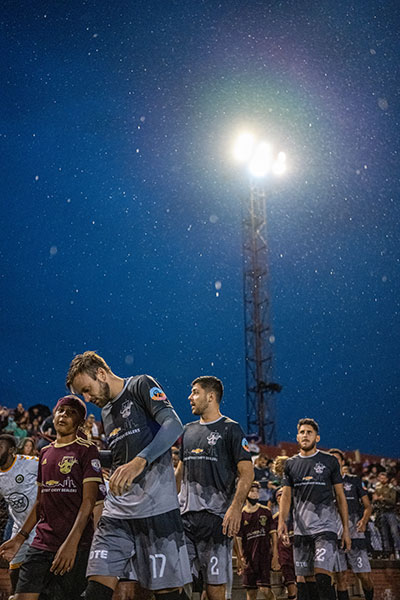 “The goal of each semester was to write a script, which was tough, but the engine above it all was Jim’s gift for motivation,” Wright said. “I’ve never felt more confident about the idea of writing something than I did when I’d walk out of one of his lectures. You can also tell he’s a sports fan who has that big run-through-a-brick-wall-energy.”

Burnstein praised Wright for his accomplishments.

“Here was a kid with vision who saw the world in a different way, and when he had his chance, he formed something special in a city he obviously loves,” Burnstein said. “He just wanted to make a great big difference in Detroit. And I think that’s something that kids learn at U-M and in our program, regardless of where they go.”

As he reflects on the club’s next 10 years, Wright said he envisions the men’s and women’s teams continued on-field success and growth among fans in the region and beyond. 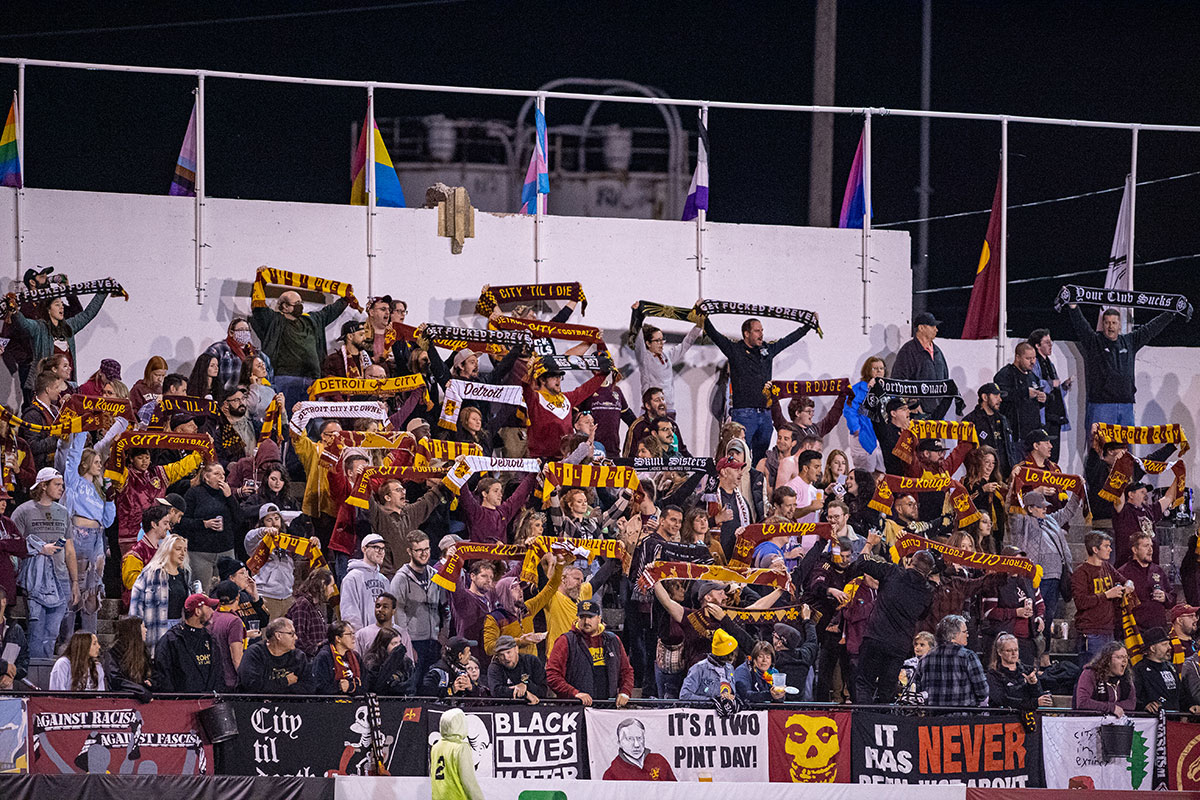 “This is the club I want to take my grandkids to see, and alongside them, an entire generation who grew up learning to love the sport of soccer in rouge and gold,” he said. 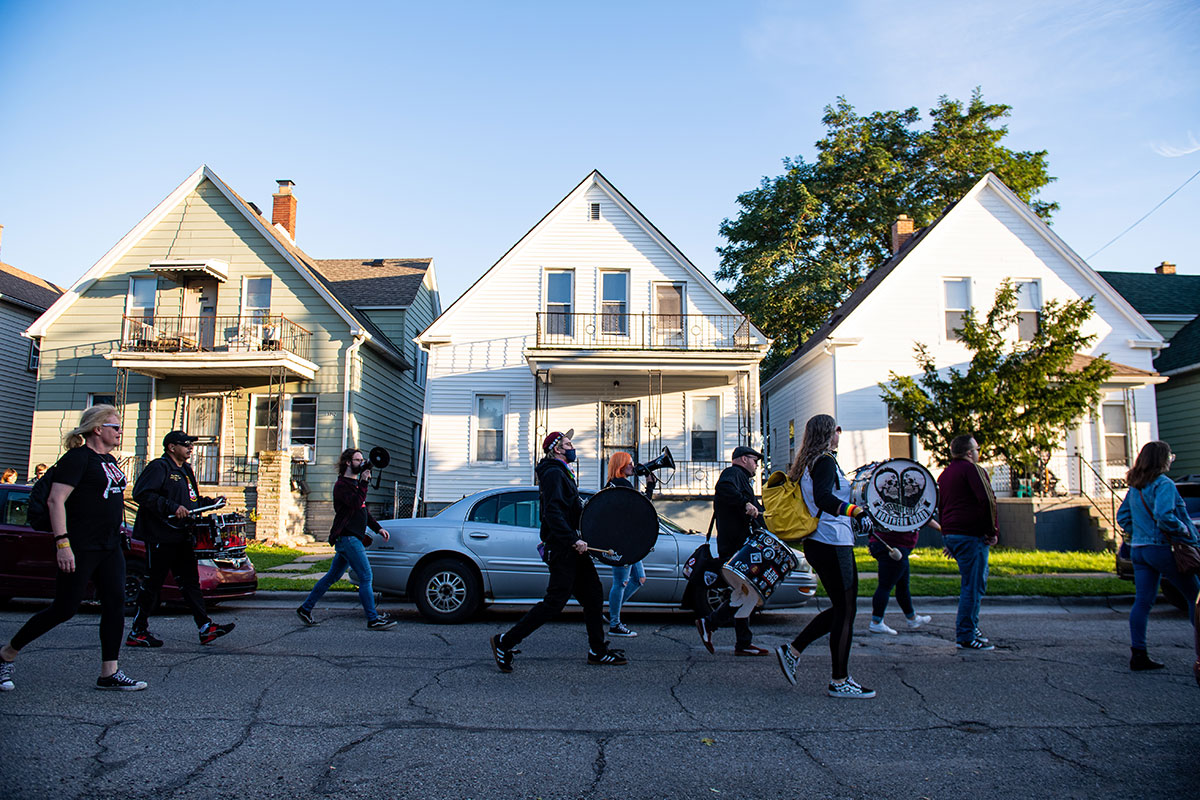 The men’s team, known as “Le Rouge,” ended the 2021 as champions of the National Independent Soccer Association’s third division. Before the end of the year, they announced their intentions to join the second division of the USL Championship. 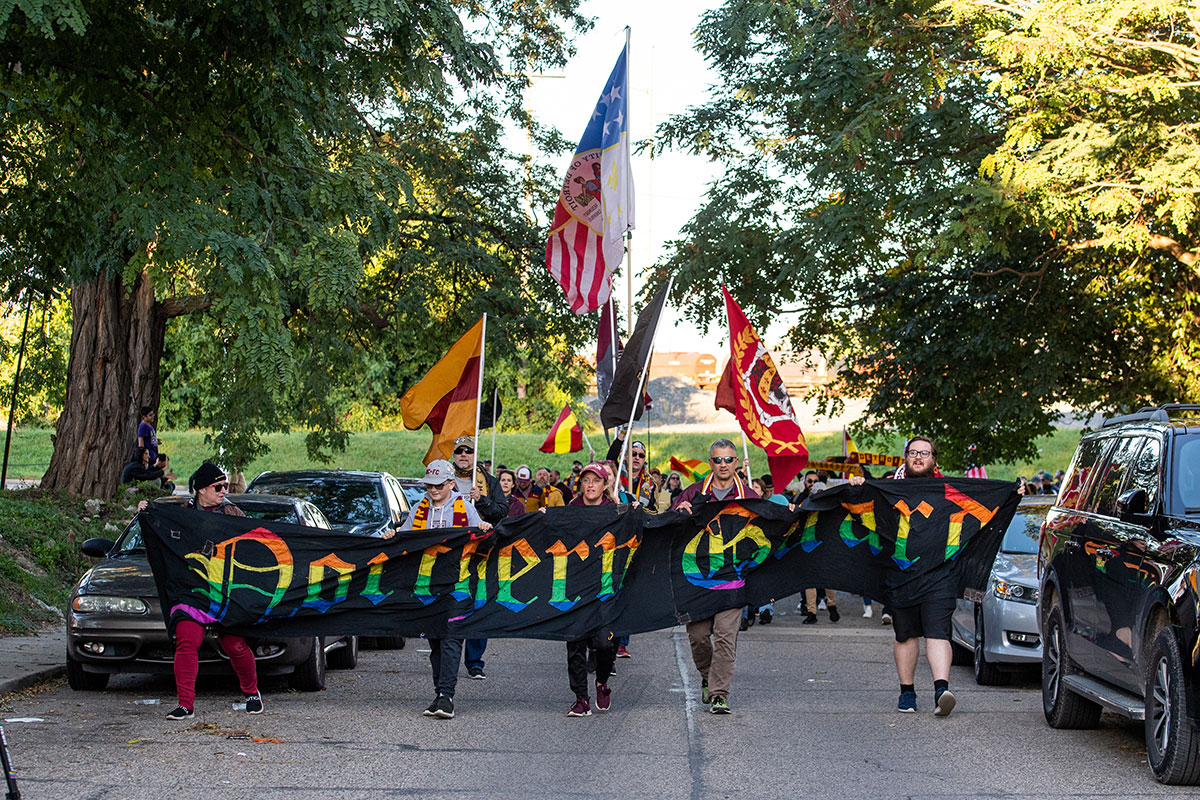 In addition to the men’s team, the club founded a women’s semi-pro side in 2020. The team played only three matches during the COVID pandemic-shortened season. Last summer, they finished third in the Midwest North division of the UWS League. They begin play in the USL-W League this spring.