A lot of kids like to do music and stuff, but they don’t have it.

It’s a lot of children around here who need this exposure.

Many kids in Detroit don’t have access to arts opportunities

A group of U-M students are working with community centers to provide art, music, and coding classes for free to dozens of students

One thing that I do appreciate is that they brought art back.

Seven Mile is a student organization at U-M, making sure that everyone can have creative pursuits no matter where you live or who you are.

We come in and we teach for two hours every week. Our goal is for them to play something on the instrument before the end of the semester showcase.

It’s good for them to see that they can do it. To take a child that never had a chance to play a cello, and now they’re playing a cello – I’ve seen their confidence grow.

They can get prepared about hard things that they never did before.

It’s well-rounded for kids in need.

I’ve been playing my violin for two years but it helped me improve my skills further. The teachers are really nice. They help you a lot.

Seven Mile was an excellent fit for Mission:City. From day one, they’ve loved all the kids and the kids have loved them.

A lot of the writing, it was new to me. I think I’ve really gotten better with how I write.

In terms of just the scope of art lessons, we do drawing, painting, acrylics, oil, things like that, but we also do mosaics, we do dioramas.

The main thing that we always aim for is a passion for technology in general, and building confidence: anything they want to learn, that they’re interested in or passionate about, it’s all accessible.

We started working on ROBLOX coding. We learned how to make a shop and make a button for it.

This coding program is something that the youth are really interested in. We really need that type of program here in our community.

Since we were founded, we’ve taught hundreds of students, and the number gets bigger every year. I think I’ve learned more from them than I’ve given to them. They’re so open-minded, and they’re so smart, and they’re so brave. Over the past four years, I’ve seen so much growth. 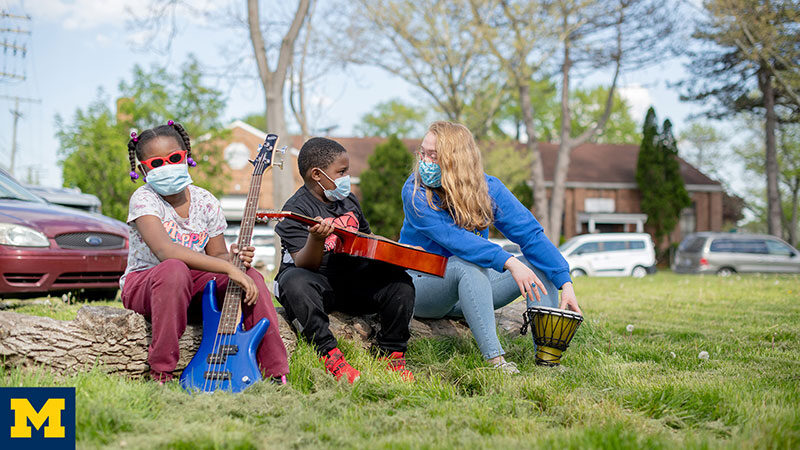 DETROIT—Eight-year-old Chase Singeltary first picked up an instrument when he was 5. After three years of weekly lessons at Mission:City, a community center in Detroit’s historic Brightmoor neighborhood, he can now read music and play several songs.

Patricia Jackson, who co-founded Mission:City with her father in 2010, says kids like Singeltary have inspired her to make music a top priority at the center, which offers a variety of resources for community members of all ages.

“Early on, we had a 5-year-old girl that came here that didn’t talk much, and I decided to enroll her in piano classes,” said Jackson, a clinical therapist who community members affectionately refer to as Ms. Pat. “She started playing on a keyboard and I watched her pour herself into it—the music really became her voice. That’s when I knew that I had to do everything I could to keep these programs going no matter what kind of budget we had.” 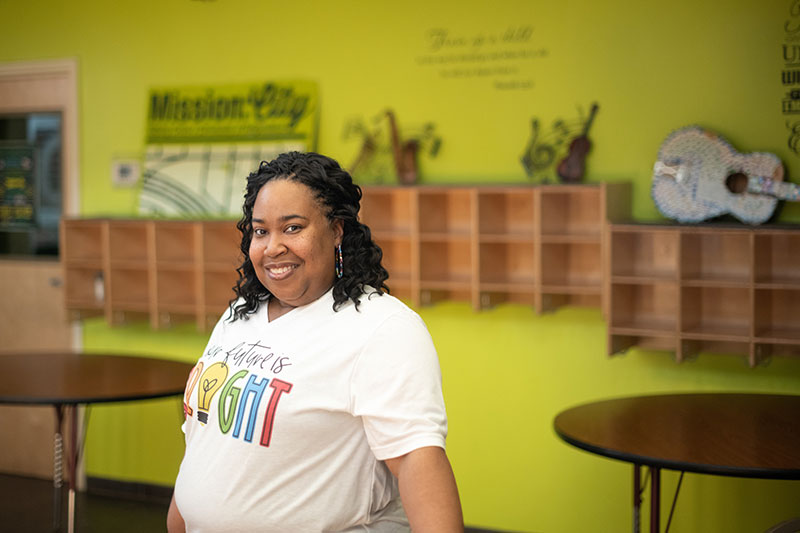 Patricia Jackson, who community members affectionately refer to as Ms. Pat, co-founded Mission:City with her father Pastor Semmeal Thomas in 2010. They have partnered with the U-M’s Seven Mile organization since 2013 to offer free music lessons to children who come to the community center. Photo by Eric Bronson/Michigan Photography.

Those first music classes offered at Mission:City were organized by Sam Saunders, a University of Michigan School of Music, Theatre & Dance alumnus who originally came to Jackson and co-founder Pastor Semmeal Thomas in 2013 to see how he could help make up for the harsh cuts to arts programming in Detroit Public Schools. Since its founding, the organization has given free lessons to hundreds of children in Detroit ages 5-16, and has grown from working with one community center to two. In addition to Mission:City, Seven Mile added Conant Avenue United Methodist Church as a partner in 2016, and while they continue to teach music lessons, they have also expanded their offerings to literary and visual arts, as well as coding. That’s when they became a hub for Seven Mile, a student-run organization and registered nonprofit founded by Saunders that offers after-school programs and summer camps for kids in Detroit. 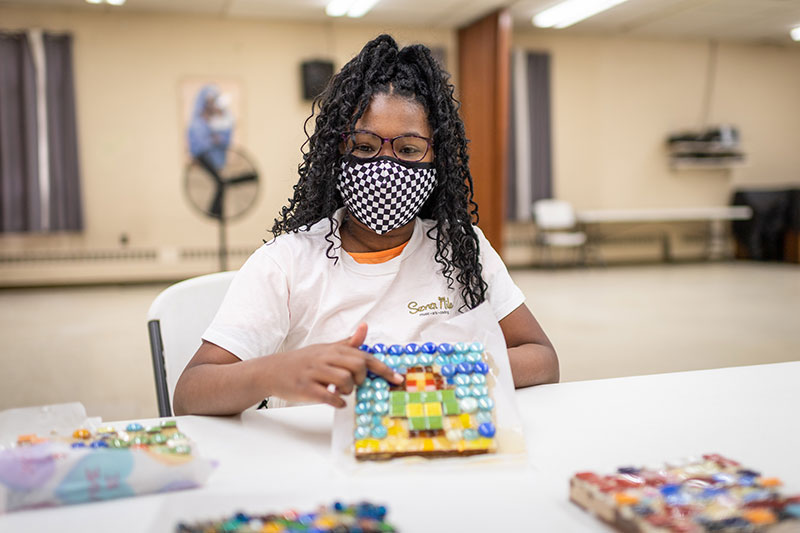 Maliyah Gladney, a seventh grader who has taken art and coding classes at Conant Avenue United Methodist Church, shows off a suncatcher that she made this year as part of an art course offered by Seven Mile, a U-M student run organization that offers free after school music, art and coding lessons to kids in Detroit. Photo by Scott Soderberg/Michigan Photography.

“Each class is different in its own way and each instructor has different teaching styles,” said Maliyah Gladney, a rising seventh grader who has taken art and coding at Conant for the last few years. “I like playing video games, so learning coding was a lot of fun. We worked a lot with Scratch and Roblox [programs that introduce coding to kids].”

“We’re seeing more and more kids that are particularly interested in coding, which they don’t get to do in school. We need this type of program because it gives our kids a chance to express themselves. I’m amazed at the things they do.” 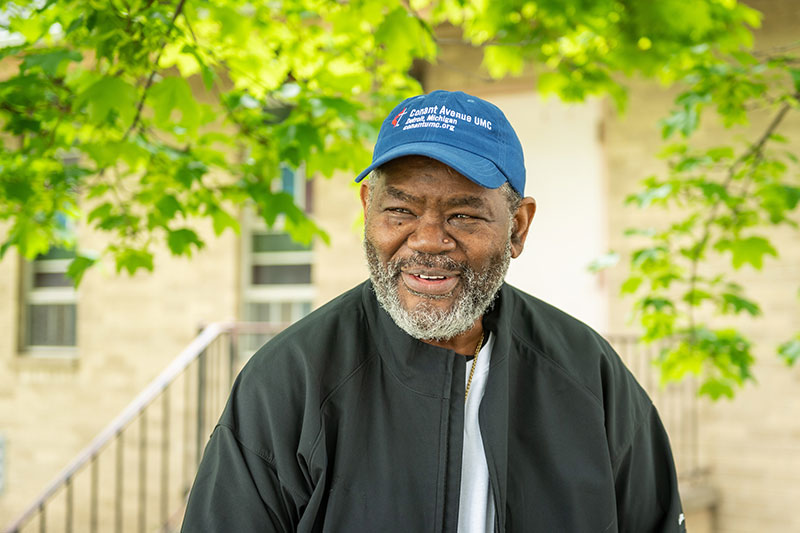 Clare Affinito, an instructor and co-director of coding for Seven Mile, is a recent U-M data science graduate who didn’t learn to code until her freshman year of college.

“Computer science is a huge field—and I am passionate about getting kids interested in the opportunities and creativity that it offers at an earlier age than I did,” she said. “We’re trying to connect the dots between what they see on their phones and computers and what goes into making that. We’re also trying to build confidence, reaffirming that there is no foolish question and that curiosity should be rewarded.”

During an average year, Seven Mile comprises roughly 70 student volunteers from all different majors across campus who, like Affinito, raise funds, recruit and train other students, create curriculum, purchase supplies and carpool once each week to Detroit to teach the material.

“Seven Mile students aren’t always studying education, music or art like a lot of people think,” said Trina Pal, a recent ecology and evolutionary biology graduate who hopes to continue to work with underserved communities someday as a medical doctor. “For a lot of us, it is a serious passion or hobby that we wanted to continue through college—I am an artist and this was my way of staying connected to that part of myself.” 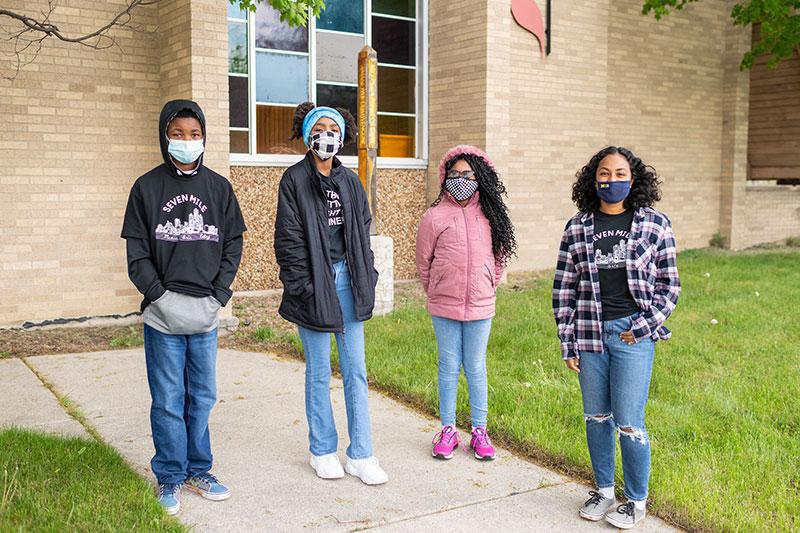 Many of the U-M students involved in Seven Mile, including outgoing Seven Mile president Samantha Redlich, spend all four years with the program, and often find that becoming part of these strong, close-knit communities is more than just a volunteer opportunity.

“I joined during my freshman year and it has been the greatest part of my time at U-M,” she said. “I think I’ve learned more from the kids than what I’ve given to them. They’re so open-minded and smart and brave, and I know we talk a lot about how we need to be a consistent force in their lives, but I don’t know what I’d do without them.”

Despite the COVID-19 pandemic, Seven Mile students were determined to continue their programs virtually this year. At the beginning of each semester, they traveled to both community centers and distributed instruments, computers and boxes full of art supplies for future lessons. In addition to instructing students on Zoom each week, they organized their annual showcase, which also took place virtually.

“Since COVID, I think it’s even more important that they’ve had this artistic outlet because it was just me trying to homeschool them,” said Cynthia Wells, Singeltary’s grandmother, who also has a 12-year-old granddaughter in the program. “They enjoy having someone else to talk to, and it gave me a break.” 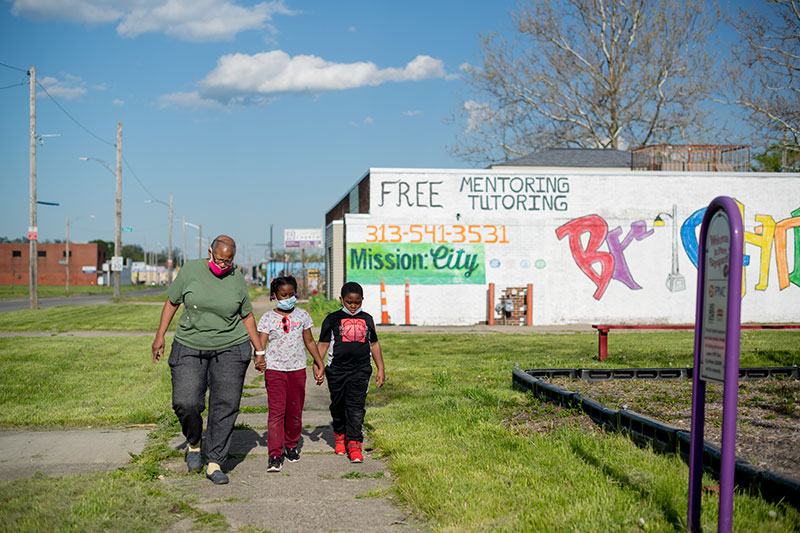 Cynthia Wells and her grandchildren Chase (8) and Chelsey Singeltary (9) have been taking music lessons for the last few years at Mission:City, a community center in Detroit’s Brightmoor neighborhood. The classes are offered for free through Seven Mile, a U-M student run organization that offers free after school music, art and coding lessons to kids in Detroit. Photo by Eric Bronson/Michigan Photography.

While Singeltary and his sister Chelsey are anxious to get back to in-person lessons this year, he recognizes that learning to play an instrument helped him get through a virtual school year and has boosted his confidence in other areas as well.

“I got the hang of it,” he said. “And I recognize that I can get the hang of other stuff, too, when I do something new.”