As a kid, I don’t remember spending as much time here.

OWNER, ANDREW’S ON THE CORNER

This was mostly an industrial area when I was young growing up. It wasn’t much of a neighborhood.

This U-M graduate is leading an organization

that’s transforming the riverfront into

a destination for all

For about 100 years, the public was really cut off from the waterfront. This place was really an industrial wasteland. The transformation of the Detroit riverfront has really turned that around.

The Detroit Riverfront Conservancy is a nonprofit organization, and our mission is to transform the riverfront into five and a half miles of parks and trails. We’ve completed about 90 percent of the East Riverfront and we’re about to start work in earnest on the West Riverfront. It’s going to be very profound in terms of its impact on our community.

People come down to the riverfront for all sorts of reasons. They come down for recreation, they come down for the cultural entertainment that’s here. We have music, we have sports. It’s really exciting to see people come together and create those new relationships and friendships.

OWNER, ANDREW’S ON THE CORNER

I’m the owner of Andrew’s on the Corner. It’s a family-owned business that’s been here for 103 years. The RiverWalk, it has transformed the area quite a bit. I never thought I would see what I’m seeing in my lifetime, and I can only imagine what my family members would think of this area now.

We’re at the RiverWalk, taking a nice walk like I typically do. I think it’s great for the city because it’s an environment of leisure and comfort. You just want to enjoy everything that it can offer.

When you go to Detroit, you have to go to the RiverWalk. You get to meet new people. And honestly, it’s a beautiful place.

Mark Wallace and the Conservancy

for residents and visitors

Today, we’re welcoming 3 million people on an annual basis. This project has had a profound impact on the economics of the city as well. We’ve seen a lot of minority contracts who have grown their businesses by working on projects here at the riverfront.

We’re also seeing small businesses open up, we’re seeing large businesses invest in the riverfront, and we’ve seen over $1.8 billion invested in the Riverfront District since 2003, when we got started.

year in the area

for decades to come

I recommend it. You have to come in person to really enjoy what it can offer. It’s just indescribable. 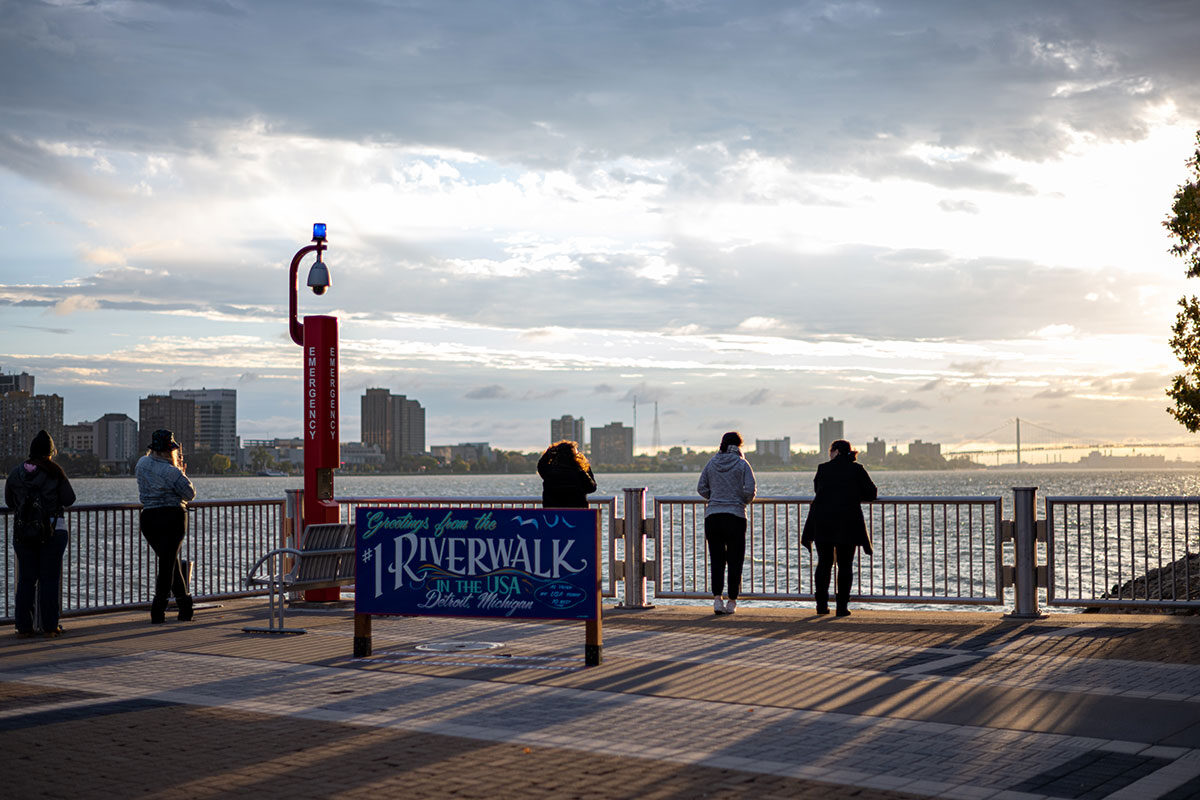 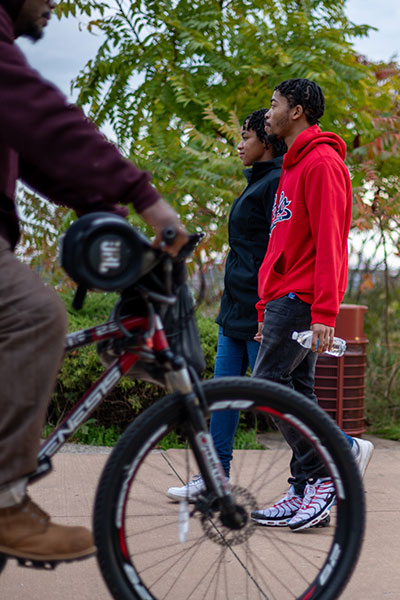 Steven Turner on a recent visit to the Riverwalk. The Detroit native says “It’s just indescribable. You have to come in person to really experience it and enjoy it.

DETROIT—On any given day, Steven Turner can stand on the Riverwalk in downtown Detroit just at the edge of America and gaze at Canada on the other side of the Detroit River.

But when he was growing up in Detroit, the area wasn’t a place anyone would visit. It was a mishmash of gravel piles, abandoned industrial buildings, broken concrete and weeds. But those days are gone now, and the Riverwalk has become a place to run a 5k, meet up with friends or take the kids out for a play date. USA Today readers have voted it the best riverwalk in the country for the past two years.

“I think it’s great for the city because it shows how the city can provide an environment of comfort and working out and just being able to enjoy the outdoors,” he said. “I recommend it. It’s just indescribable. You have to come in person to really experience it and enjoy it.”

Over the past 19 years, the Detroit Riverfront Conservancy has painstakingly assembled and developed the broken parts and created a pathway to rival the public park fronted Windsor Riverfront. The area has seen a $1.8 billion investment and counting while visitor numbers have gone from essentially zero to 3 million.

“The events here are amazing. We have music, we have sports. We have volleyball. We have sushi and barbecue side-by-side and people can really come down and find out whatever fits for them,” said Mark Wallace, the Detroit Riverfront Conservancy president and CEO—and University of Michigan Ford School of Public Policy alumnus.

“If you’re a senior, you want to meet other seniors and go for a walk. You can do that. If you’re a dog owner, come on down because we have dog walking clubs. It’s really exciting to see people come together and create those new relationships and friendships.”

“I think it’s great for the city because it shows how the city can provide an environment of comfort and working out and just being able to enjoy the outdoors.”

The Detroit Riverfront Conservancy was created with the mission of developing access on the Detroit River. The entire vision is 5.5 miles of riverfront from the Ambassador Bridge to Gabriel Richard Park just east of the Belle Isle Bridge, and includes the construction of a continuous RiverWalk along with plazas, pavilions and green spaces. 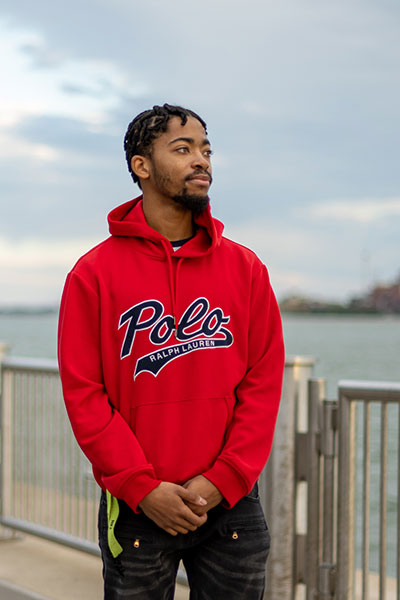 The conservancy was started in 2003 with the leadership of other U-M alums Faye Alexander Nelson, former president and CEO of the conservancy, and Matt Cullen, the current chairman of the board.

The Riverwalk connects eight parks. The east riverfront work is about 90% complete with work to begin soon on the west riverfront that will include the 22-acre Ralph C. Wilson Jr. Centennial park. The project broke ground just last week.

“It’s been a remarkable transformation, and it’s had a profound impact on the way our community comes together,” Wallace said. “The Detroit riverfront is one of the most diverse gathering places, anywhere in the state of Michigan. That’s one of the most important things about this place. Detroit is very big. So having a space like the riverfront, where everyone comes together is really critically important.”

Wallace said the improvements have had a profound impact on the economics of the city with many minority contractors working on projects, more small businesses locating in the area and established ones investing. 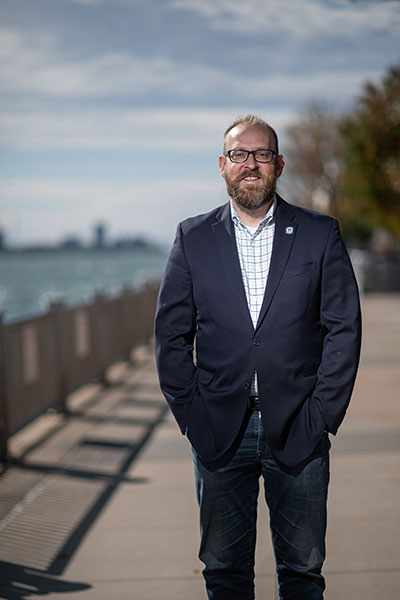 Tom Woolsey can attest to the impact the Riverwalk has had on his business, Andrew’s on the Corner, a bar and grill his family opened in 1918 on Joseph Campau. He was raised at the restaurant, played on the area streets and fished off some of the river docks.

After his grandfather passed away in 1977, the area had become dilapidated. And then as time passed, the area became known as the warehouse district and then Rivertown. More businesses opened up and then the city’s plans to locate three casinos in the area pushed everyone out in about 2000, he said. He kept his business going by shuttling people to sporting events, particularly Red Wings games.

“On a Friday night when it was busy, we’d take as many as 375 people and I had eight school buses at one time. So that’s kind of what got us over the hump,” he said.

The casinos ended up going to other locations in the city, and the Riverwalk work began. Woolsey said it’s now common to see people walking, biking, rollerblading or riding scooters down the street and walkways. 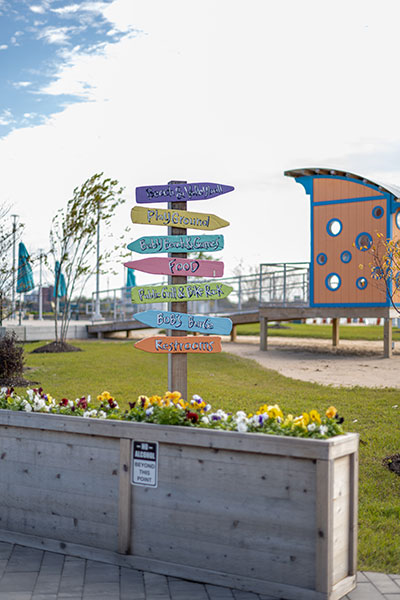 One of the many play areas along the Riverfront.

“I never thought I would see what I’m seeing in my lifetime. And I could only imagine what my family members would think of this area now after what has happened in Detroit,” Woolsey said. “It’s a great thing.”

The full breadth of activities along the Riverfront includes book readings for kids, volleyball leagues, tai chi, moonlight yoga, a partnership with the Detroit Symphony Orchestra and more.

The conservancy also manages the Dequindre Cut greenway, which saw usage rise 40% during the pandemic. The Riverwalk saw an increase of 20% in visitors.

Amie Turner, no relation to Steven, was out enjoying the sunshine on the Riverwalk recently. She said she has some advice for visitors: “I’ll be like, okay, what’s your one destination that you have to do when you go to Detroit? You have to go to the Riverwalk. And my favorite part is looking over the water and seeing Canada, like it is the coolest thing.” 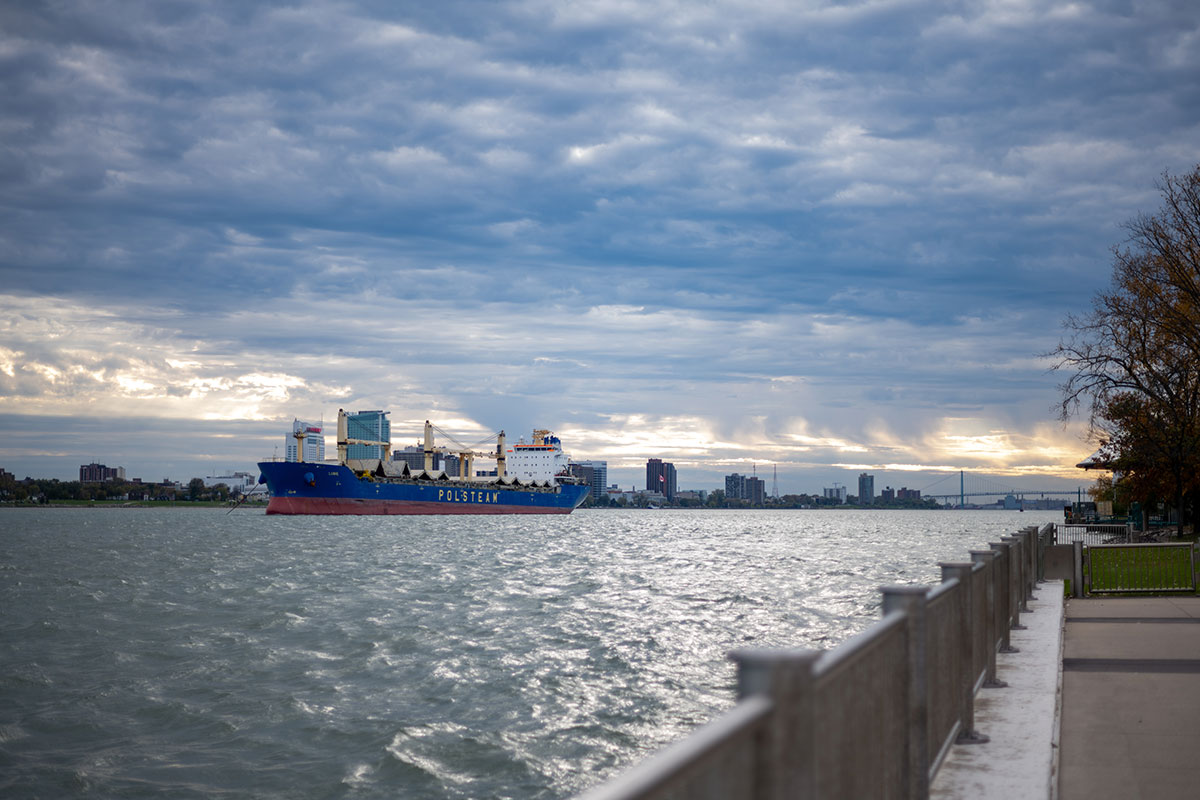 It’s not unusual to see large boats and barges carrying cargo through the Detroit River. 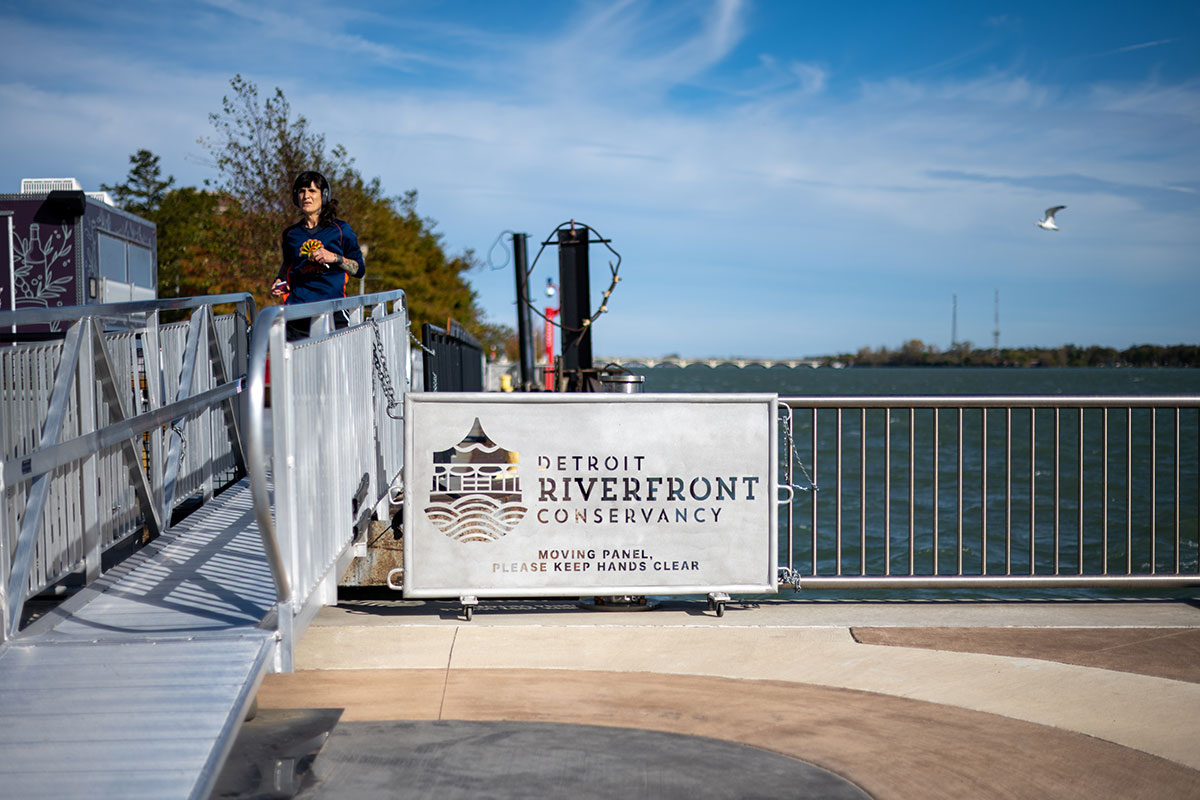 Jogging, walking and biking are popular activities along the Riverwalk. 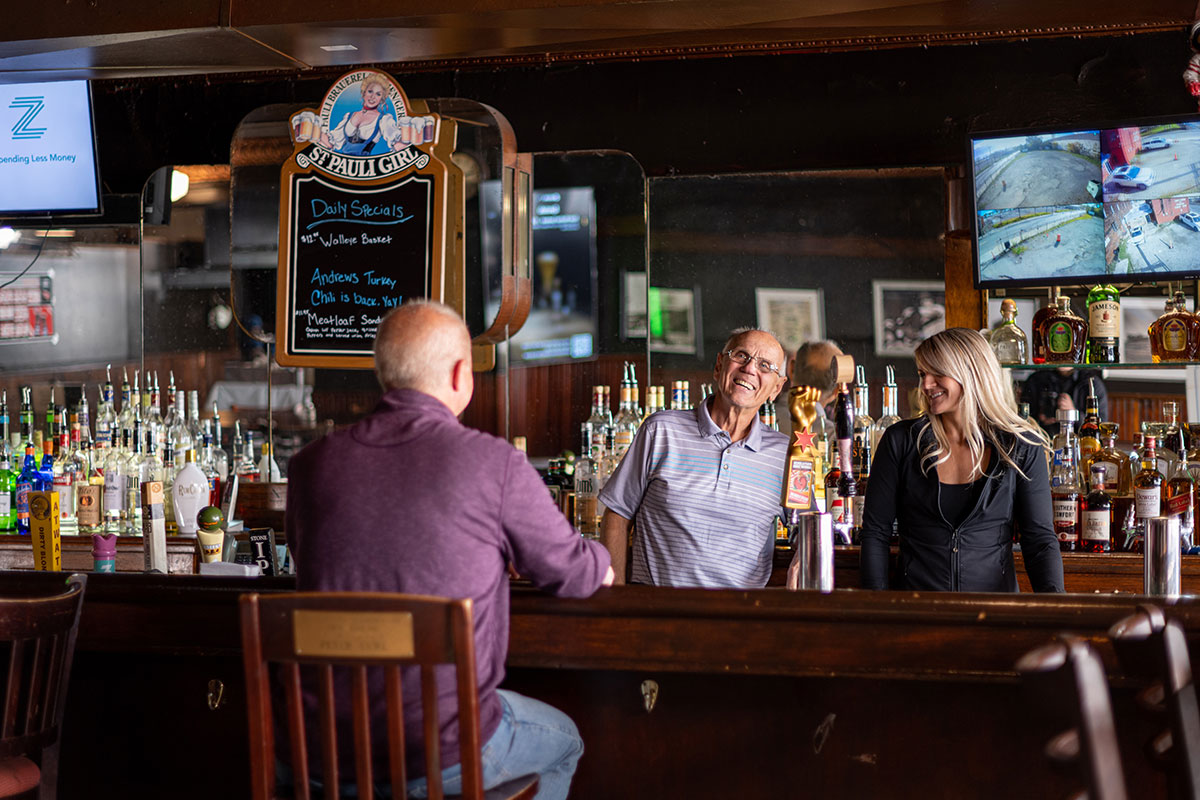 Tom Woolsey can attest to the impact the Riverwalk has had on his business, Andrew’s on the Corner, a bar and grill his family opened in 1918 on Joseph Campau. “I never thought I would see what I’m seeing in my lifetime.” 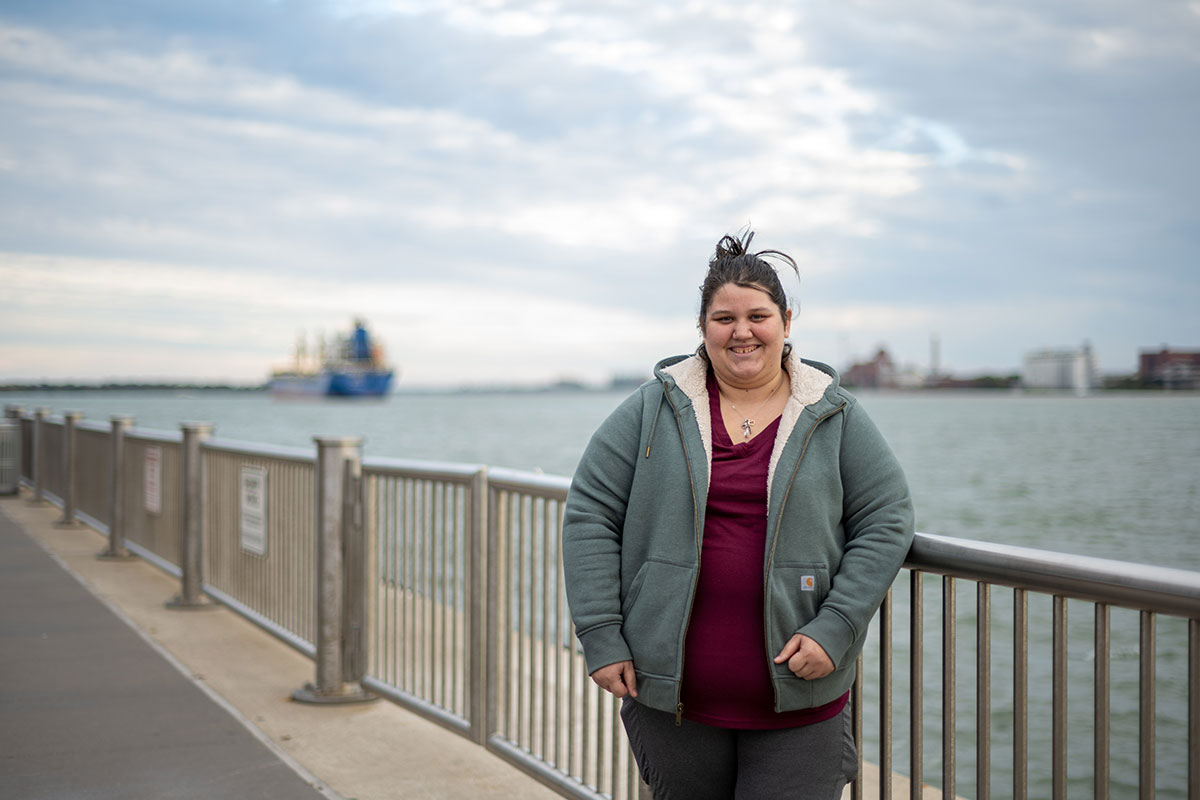 Amie Turner says her favorite thing about the Riverwalk is “looking over the water and seeing Canada, like it is the coolest thing.”