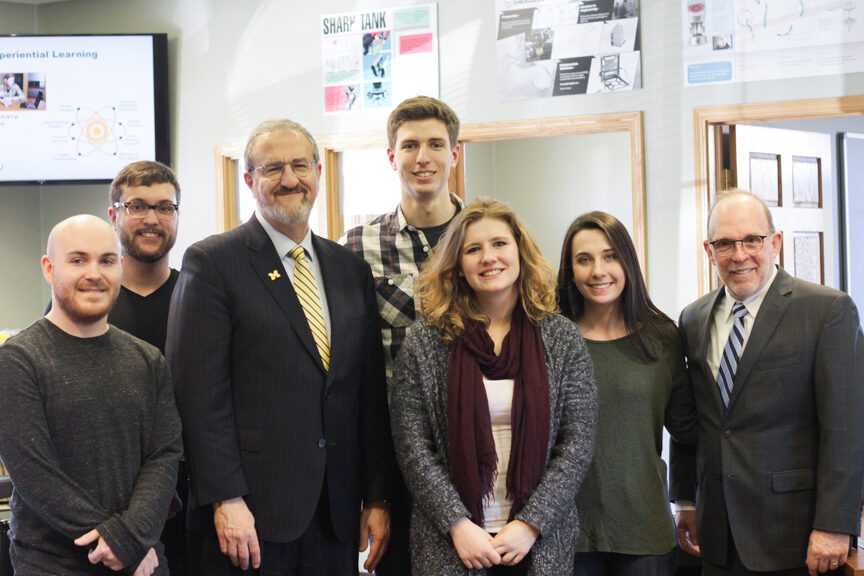 Sharing the message that the University of Michigan is a resource for all parts of the state, President Mark Schlissel visited Marquette in the Upper Peninsula, meeting with local students, alumni, business and education leaders.

“The University of Michigan is your public university up here in the U.P. We’re everyone’s public university and it’s very important to me that your children think of us when they’re thinking of where to go to school,” Schlissel said at a meeting of the Economic Club of Marquette County. He added that about 75 students from Marquette are currently attending U-M.

The visit was the first time in 30 years that a sitting president of the University of Michigan made the trip to the U.P.

Schlissel began his day with a stop at Marquette Senior High School, where he spoke to about 30 honors students gathered in the library. He discussed the value of a U-M education and also answered student questions about the university’s admissions process.

Alex Duvall, a senior who has been accepted to U-M for the fall semester, said he chose to apply to the school because of its reputation.

“I like its academics and the prestige, just the overall feel of the university. I want to go somewhere that would challenge me and I feel like it would be a great place to challenge myself,” Duvall said.

Schlissel toured the high school’s new Makerspace, a high-tech lab that makes the newest technologies, like 3D printers, available to students and the community.

Teacher Becky Simmons told Schlissel about a recent project conducted by students in the Makerspace in which they examined local energy problems and possible solutions. With the shutdown of a nearby coal-fired power plant imminent, the students researched the possibility of using new Tesla solar panels to power their school.

From there, Schlissel made a quick stop at Donckers in downtown Marquette, an iconic restaurant that was also visited by former U.S. President Barack Obama in 2011.

At Northern Michigan University, Schlissel saw the Upper Peninsula Brain Tumor Center—a collaboration between UP Health System-Marquette, which is a Duke LifePoint Hospital, and NMU. He met with NMU student Mel Flaherty, who will complete her undergraduate degree at NMU this year and continue her education at U-M’s medical school this summer.

Following the tour, Schlissel, NMU President Fritz Erickson and other NMU administrators discussed a new cold body forensic anthropology site being developed by NMU, the first of its kind in the world.

Schlissel also saw NMU’s entrepreneurial think-tank, Invent@NMU. Located in a former bank across the street from NMU’s main academic building, Invent@NMU is available to the public at large. Paid employees of Invent, NMU students help people with ideas for new business ventures see those ideas through, either to actual businesses or to their inevitable end.

“They pride themselves on this idea, that you walk in with an idea on the back of a napkin and eventually out the door you can go,” Erickson said. “The other thing they told me that has always stuck with me is that they like to help people fail fast, so they don’t invest a lot of money in something that’s either already out there or you can buy on eBay for $1.89.”

David Puskala, director of Invent@NMU, said having people from outside the area step through their doors and learn about what they’re doing, especially from other Michigan universities, is always beneficial.

“Getting the word out about what we do … certainly doesn’t hurt but what we are aware of, specifically at Invent, is just the opportunity to collaborate with others that are doing similar things to us, to contribute what we know to that conversation but also to learn from their experiences,” Puskala said.

Schlissel’s final event in Marquette was as the keynote speaker for the Economic Club of Marquette County. He spoke about his time in Marquette, remarking on the high rate at which Marquette Senior High School graduates go on to college (roughly 80 percent, according to the principal), and the unique happenings at Northern Michigan University, including Invent@NMU.

He also discussed the importance of making a college education affordable for any who wish to pursue one, highlighting the fact that the university provides financial aid that covers 100 percent of the demonstrated financial need of eligible in-state students.

Rich Tegge, president of the Economic Club of Marquette County, said education is a key component to a healthy economy, a main reason behind inviting President Schlissel to speak.

“We try to bring topical conversation to Marquette that is important to not only our area and the state as a whole and even national or international,” Tegge said. “We felt that the president of the University of Michigan was an important dialogue for us to have to find out what’s happening. We need to bridge that distance between Marquette and Ann Arbor by bringing people like him to give us perspective of what’s happening on campus, how things are happening as far as training in today’s youth, from their standpoint.”

Schlissel further touched on the overall importance and benefit of offering higher education to any who wish to seek it.

“One of the reasons that college has become so expensive, I think, is that I think we’ve stopped viewing it as a public good. We’ve stopped viewing it as a shared responsibility for all citizens to chip in so that people, regardless of their means, can go ahead and be educated and that’s something that I’m going to try to use my position to argue that we should be smarter,” Schlissel said. “When we think about ways to make long-term investments to make us more prosperous as a state, more prosperous and secure as a nation, it’s education. It’s the surest bet that we can make in the future is education.”