Michigan maritime: Ports set to grow economy throughout the state

In a time when supply chains are in crisis,

with Michigan ports to help them

become a hub of economic activity

The Port of Monroe is Michigan’s only port on Lake Erie.

We like to call it Michigan’s Gateway Port. We’re the first stop in the state on the Great Lakes Saint Lawrence Seaway system, and the most rapidly growing port in the state.

was in need of investment

-Demonstrate the impact of allowing

shipping containers into the ports

-And develop plans that

give ports a voice in state government

University of Michigan
Students aren’t just learning in the classroom, but they’re going out into world and working

with real people and organizations on important, timely policy issues.

research study that looked at what Michigan’s doing, what we are not doing, you know, how we can do better.

Our studies with the University of Michigan have helped add credibility to our cause. It’s one thing to tell your own story. It’s another thing to have it defined by education and research.

The Port of Monroe is projected

Maritime shipping, it’s actually a pretty big industry. And so it reminds us of the diverse nature of the economy in Michigan and all of the different ways that goods and services get moved. So my hope is that we’ll be able to continue to partner with the Port of Monroe, help them grow and expand and have the economic impact that they’re positioned to have, 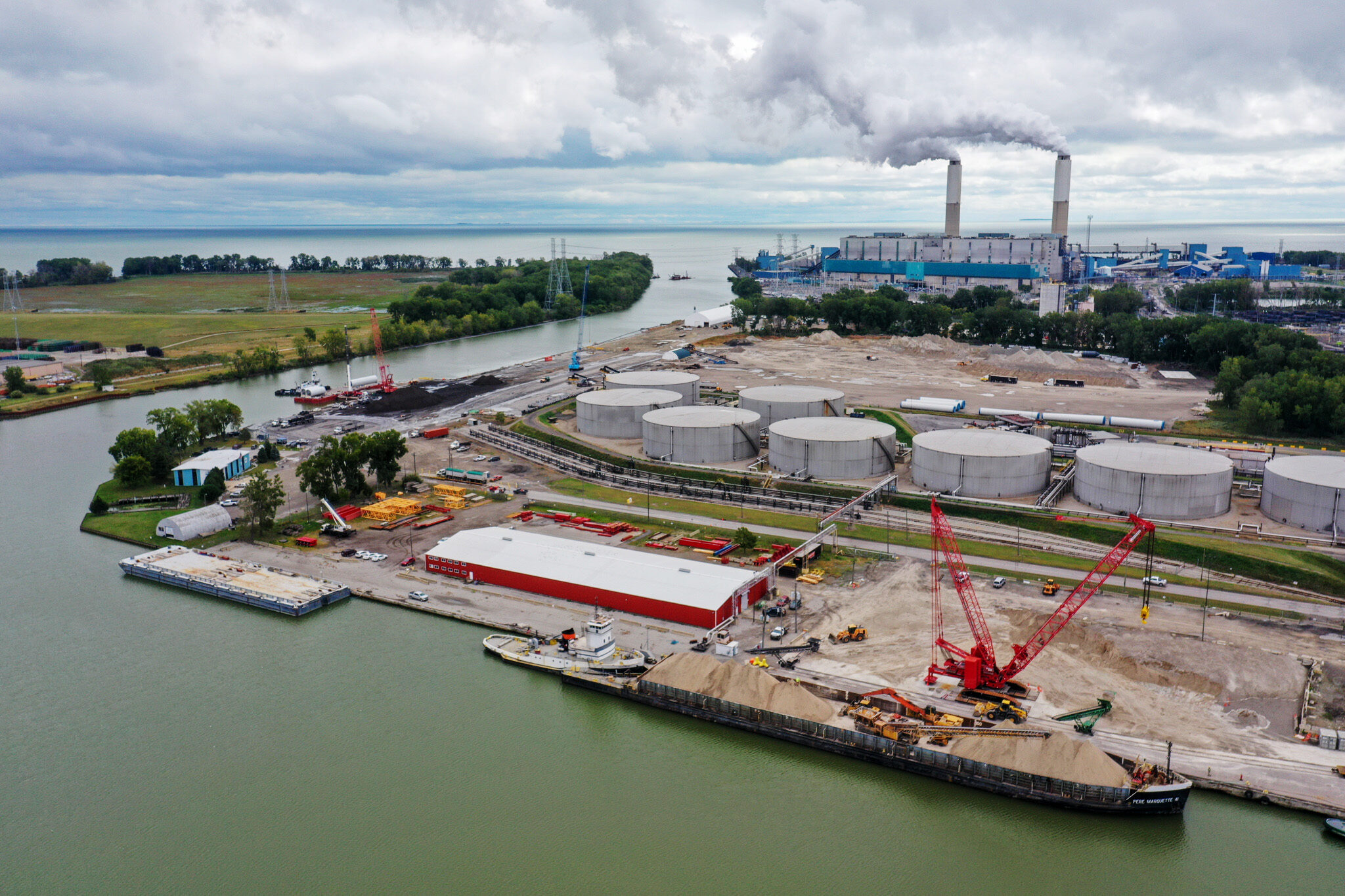 MONROE, Michigan—A new law that gives the state’s 32 ports tools to expand and grow the maritime economy started out as a community project for a handful of University of Michigan students.

U-M students first worked with the Port of Monroe in 2012 and over the next decade would make the case for investing in ports around the state to increase container and industrial shipments, which is expected to lead to job creation.

When it comes to research and education, a trusted, valued perspective, the University of Michigan is the gold standard.

The Maritime and Port Facility Assistance Grant Program Act, which Gov. Gretchen Whitmer signed in July, sets up an office in the Michigan Department of Transportation to oversee the grants. It puts the Great Lakes state ports in line for federal grant dollars that neighboring states have enjoyed for years.

The Port of Monroe, Michigan’s only Lake Erie port, received $5 million in state funding this summer, which helped it to leverage an $11 million grant from the U.S. Department of Transportation in November. The funding will help it build a container cargo scanning facility and a riverfront wharf for vessel transfer of wind energy cargos and other improvements. 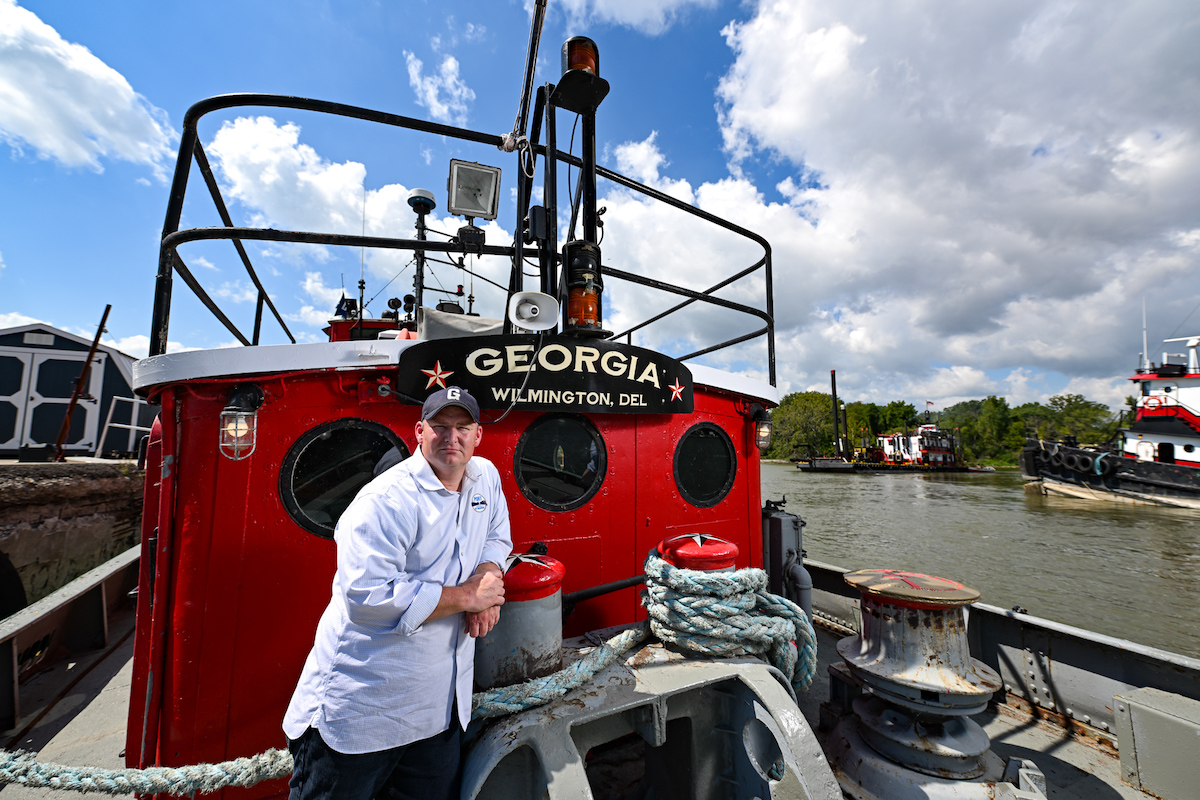 Paul LaMarre III, port director for the Port of Monroe, said the work of U-M students was foundational in the port’s growth strategies.

Paul LaMarre III, port director for the Port of Monroe and chairman of Whitmer’s Port Advisory Committee, said the work of U-M students was foundational in the port’s growth strategies.

Gerber, the Jack L. Walker Jr. Collegiate Professor of Public Policy and director of the Program in Practical Policy Engagement at the Ford School, said that studying policy alternatives is an important part of the coursework. 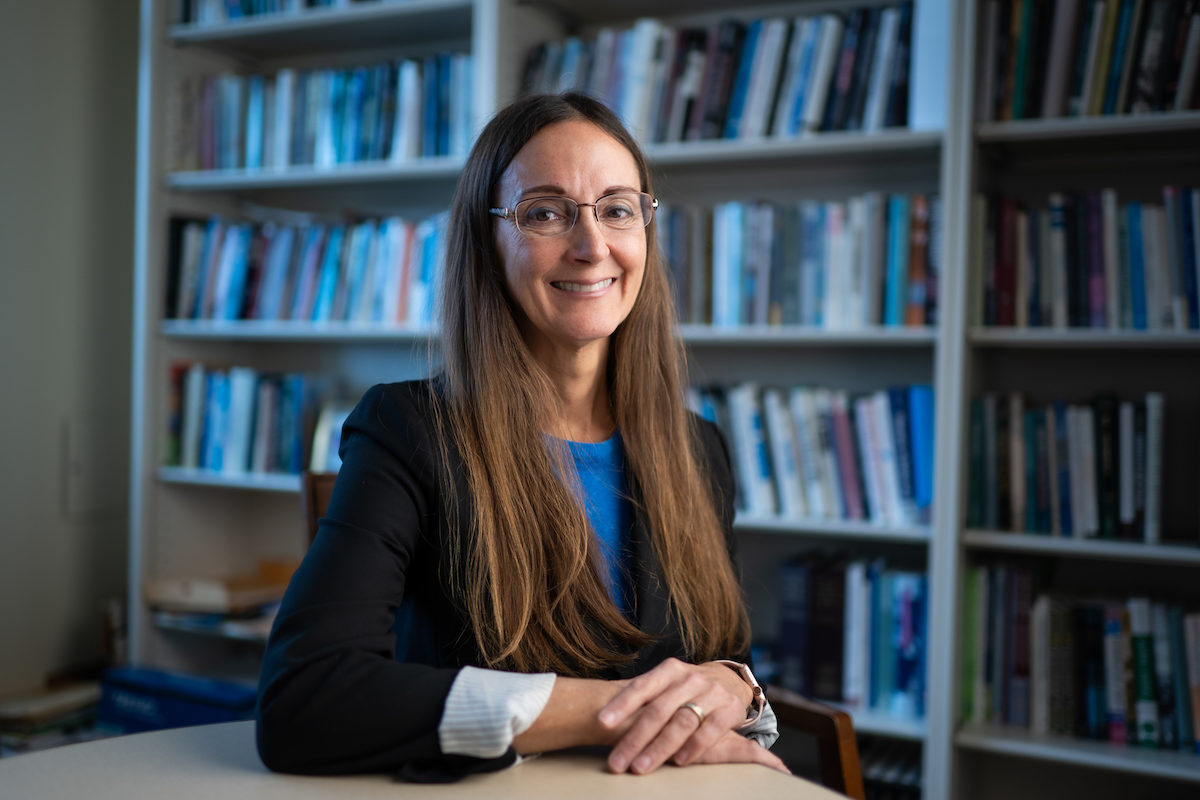 Elisabeth Gerber, the Jack L. Walker Jr. Collegiate Professor of Public Policy and director of the Program in Practical Policy Engagement at the Ford School, said that studying policy alternatives is an important part of the coursework.

“The port is now bringing in a lot more money serving more customers and providing an environmentally friendly transportation alternative to heavy materials relative to trucks, which is how most heavy materials get moved around,” she said. “Also, by changing policy, there are potential long-term benefits for the state as well. It’s setting up a mechanism to support the maritime industry throughout the state, which can provide real benefits to not just the ports themselves, but also all the stakeholders who benefit from activity in the ports.”

The students’ research found that Michigan’s ports were underutilized and could contribute to the state’s growing economy if given more investment.

The Port of Monroe is one of 32 active cargo ports around the state. The Great Lakes and St. Lawrence Seaway forms a maritime transportation system that runs 2,300 miles between the St. Lawrence Seaway on the Atlantic Ocean to Lake Superior. Michigan’s ports handle 51.7 million tons of cargo valued at $4.1 billion annually, according to the newly established Maritime and Port Facility Assistance Office.

“Our bipartisan bills present a historic opportunity for Michigan to become more competitive with other states by investing in the maritime industry,” said state Sen. Stephanie Chang, a Detroit Democrat and U-M alumna who sponsored legislation to help the ports. House legislation was sponsored by Rep. Jack O’Malley, a Lake Ann Republican. 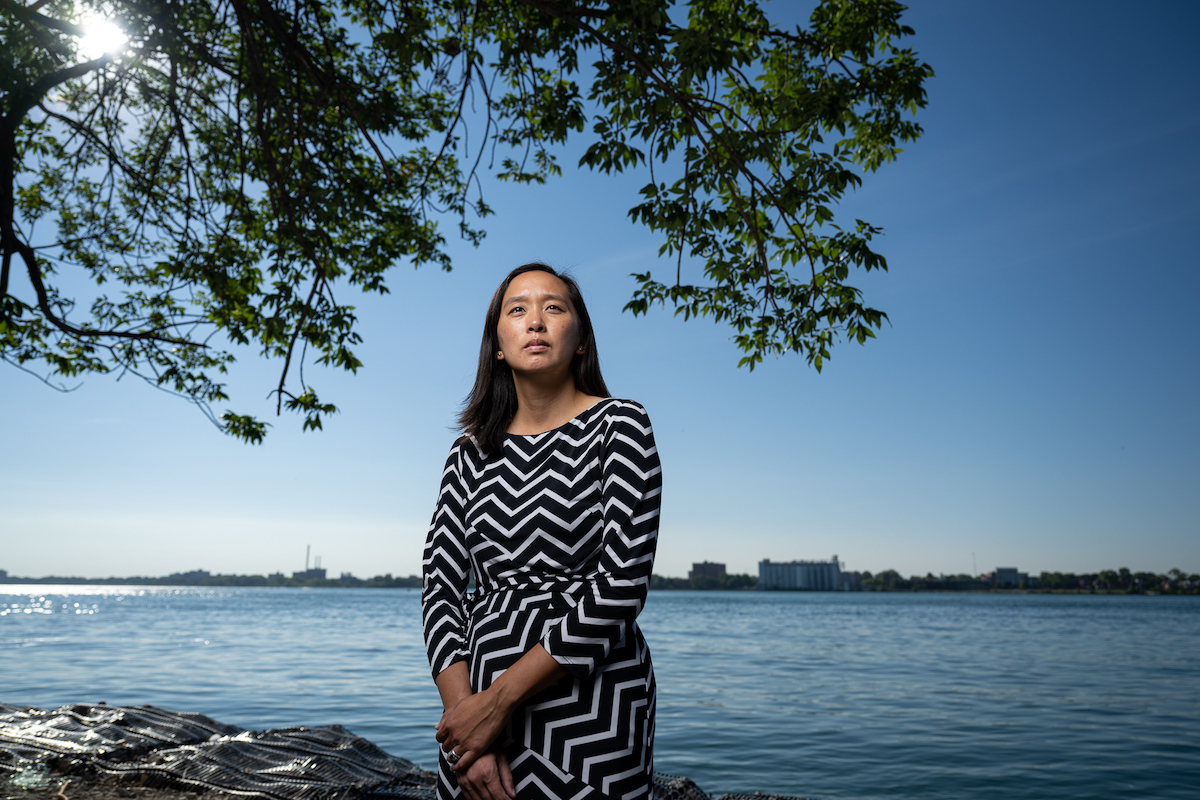 The Port of Detroit, which is in Chang’s district, also received federal dollars last month—$16 million for infrastructure, including a new port and rail connection, dry bulk cargo and more.

“Over the past few years, I’ve really learned a lot about the fact that although Michigan is the Great Lakes state, we aren’t as involved as other Midwest states in helping the maritime industry,” Chang said. “I realized that we can do so much to increase our maritime activity, create jobs and at the same time make sure we are doing it in a sustainable way that’s protecting our environment.”

Chang reached out to several private and public ports, environmental groups and MDOT to get it right. She also worked in partnership with state Sens. Wayne Schmidt, a Traverse City Republican, and Dale Zorn, an Onsted Republican who represents the Monroe area. The U-M student report was helpful in determining what Michigan could be doing to support a more robust industry.

Chang, who earned her bachelor’s degree along with master’s degrees in public policy and social work at U-M, said her education helped her to craft a strong argument, build coalitions, and think of and navigate around potential opposition.

Aside from creating jobs, improving port infrastructure and increasing the number of state ports with Green Marine environmental certification to protect communities around the ports, the work strengthens the state economy. 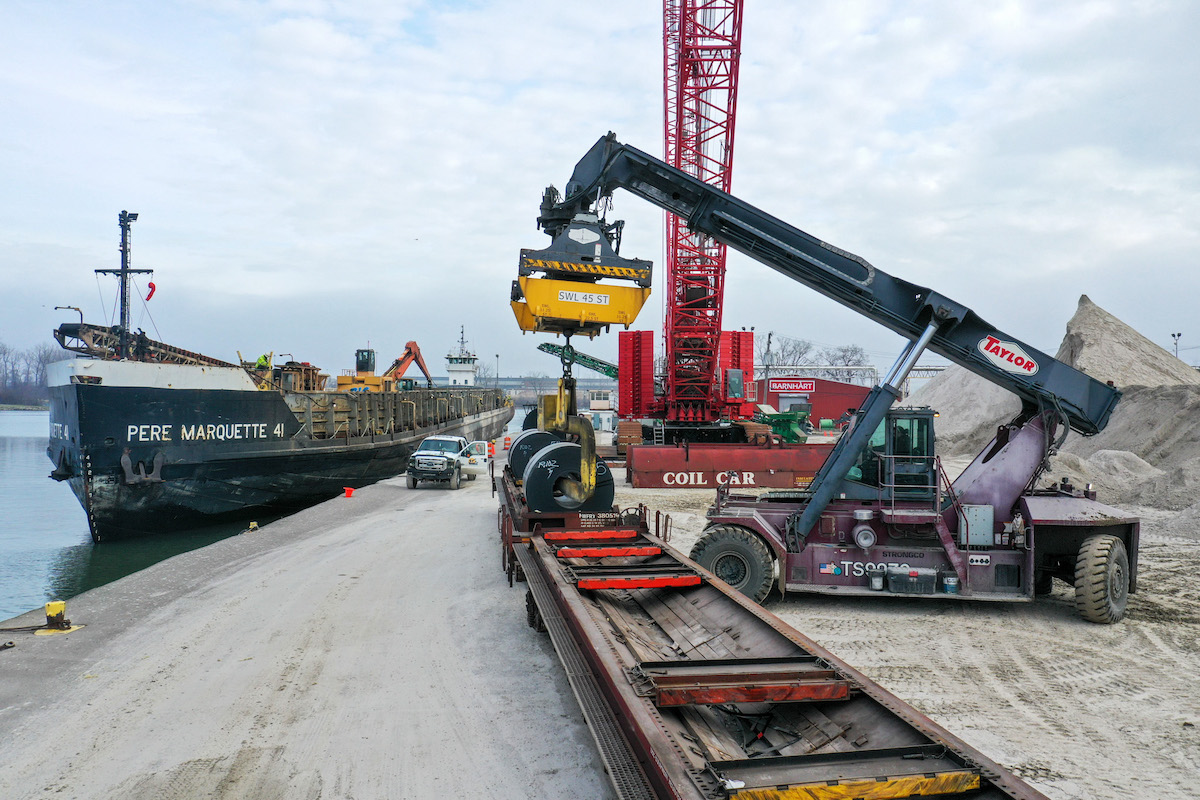 U-M students first worked with the Port of Monroe in 2012 and over the next decade would make the case for investing in ports around the state to increase container and industrial shipments, which is expected to lead to job creation.

“I think that it’ll make a good statewide impact by addressing some of the supply chain issues that we’ve been seeing, because we know that moving things on water can be more efficient than moving things in other ways,” Chang said. “So, I think it is really important that we are making sure that as ports are expanding their activity, that they’re doing everything that they can to lower emissions, both from the ships and from trucks.”

The Ford School’s Gerber said that over the years different teams of students have worked on a number of projects for the Port of Monroe as part of the school’s engaged learning approach that has them work directly with people and organizations outside of the university on real world problems.

Research projects for the Port of Monroe have included:

“Through this work, we know that the economic impacts and other impacts of entities like the Port of Monroe are significant. They’re economic drivers. They hire people, they purchase things, they have contracts with other companies, and so they have a direct economic impact on the local community,” Gerber said.

“But you can also take a step back and think about them as one piece of this broader new mobility, sustainable transportation sector, within which they are working. Maritime shipping actually is much more clean relative to a lot of other forms of transportation, and so providing the ability for the Port of Monroe and other maritime actors to advocate for themselves and for their elected officials to advocate for them has allowed this sector to become more robust.”

LaMarre said the relationship between the port and U-M started with a report on synthetic gypsum, a byproduct of coal-fired power plants like DTE Energy’s Monroe Power Plant situated next to the port. 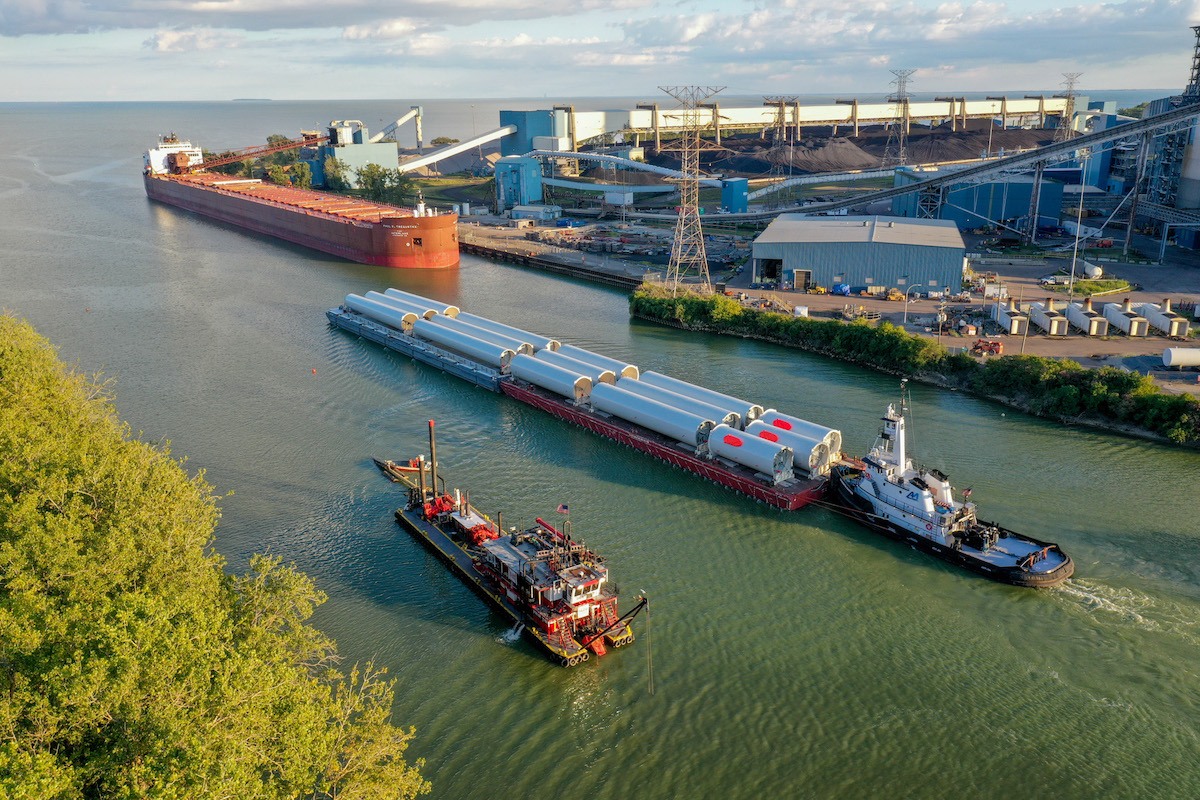 The Port of Monroe, Michigan’s only Lake Erie port, received $5 million in state funding this summer, which helped it to leverage an $11 million grant from the U.S. Department of Transportation in November. The funding will help it build a container cargo scanning facility and a riverfront wharf for vessel transfer of wind energy cargos and other improvements.

The port has traditionally processed coal cargo through its docks for the plant. It also sees limestone that’s used to scrub the exhaust gasses at the plant and the byproducts created from the power generation process. The synthetic gypsum is used in wallboard, cement mix and agriculture. The port also handles bottom ash, which is used in cement mix.

“The University of Michigan has been involved with the port’s rebirth literally since 2012, when we were assisted with a study on synthetic gypsum,” LaMarre said. “In order to put the port back on the map, we had to ensure that cargo was going across our docks. That study with synthetic gypsum ensured that up to 600,000 tons of material a year were going to be beneficially reused, rather than put in a landfill.

“When it comes to research and education, a trusted, valued perspective, the University of Michigan is the gold standard.”

The synthetic gypsum report allowed LaMarre to approach DTE to establish a partnership between the port and utility to manage the byproduct, which is sold to other Michigan businesses to use in manufacturing processes.

The limestone used in the scrubbing process at DTE comes from the Lafarge cement company in Alpena. It’s unloaded at the power plant and goes through a ball mill that crushes it. The crushed limestone and water are sprayed into exhaust gases in the stacks, which absorbs the carbon, mercury, sulfur and other chemicals. What remains after it dries is synthetic gypsum and that’s sent back up to Alpena for use in cement plants, LaMarre said.

LaMarre also was backed by the U-M students’ study when he testified on the port bills in the Michigan Legislature.

“It’s again U-M’s reputation for excellence that substantiates the findings,” he said. “Since Michigan was investing zero dollars in maritime, they’re now going to establish an office as well as a multimillion-dollar grant program … we’re talking about a few hundred jobs. It’s significant.”

LaMarre plans to continue working with the Ford School students as the port grows and works through challenges from regulatory to cargo-related ones for “strong, focused and team-oriented people who can objectively look at a problem and give us good advice. Liz and her students have been exactly that.”

This is Michigan
Previous Story