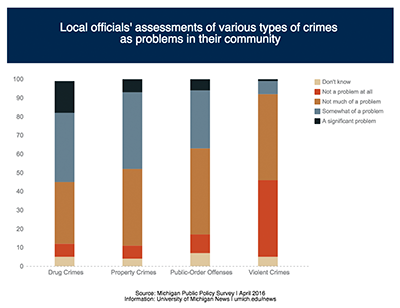 Nearly half of local leaders from the largest jurisdictions in Michigan say they lack sufficient funding to fight crime in their areas, according to a University of Michigan survey.

“These are also the very places that perceive crime to be much more of a problem compared to small places,” said Tom Ivacko, administrator of the Center for Local, State, and Urban Policy at U-M’s Ford School of Public Policy.

Looking statewide, 22 percent of local officials say that they don’t have sufficient funds to meet their law enforcement needs. Since 2001, the number of police officers declined by more than 4,000 and there are 23 fewer law enforcement agencies in the state, according to state data.