In 30 years, there will be as much
plastic in our waterways as fish

I mean, I’ve grown up here since the late ’70s and…to see a piece of trash—you could pick it up and take it home…

SO many just—standing right where I am right now, there’s more than you can even count.

JACKSON RIEGLER
FOUNDER OF OSHKI
U-M Environmental Science and Economics Major
22 million pounds of plastic waste enter the Great Lakes every year. And so…it grades down into these little microplastics which get into our water stream, get into our food stream and destroy ecosystems.

Jackson created the first company to use
100% U.S. recycled plastic to produce clothes

[Jackson]
OSHKI is an apparel company that turns plastic waste from the Great Lakes and other U.S. waterways into durable and sustainable clothing.

6 plastic bottles’ worth of water
is recycled into each product

How can we create a better future—and that’s super-important.

JEFF SORENSEN
DIRECTOR OF U-M OPTIMIZE
Jackson, with his project OSHKI, joined our social innovation challenge through OptiMize, and so what he did was he worked with us through our five-month incubator program where we help students with early-stage ideas, develop them into things that are out in the world making real impact.

Our students and their interests—

particularly this generation—in using their careers, using their work to make the world a better place, Jackson has taken advantage of all of these opportunities at the University of Michigan to better his organization and that’s only going to lead to the ripple effect of the impact that we have more broadly on the world. 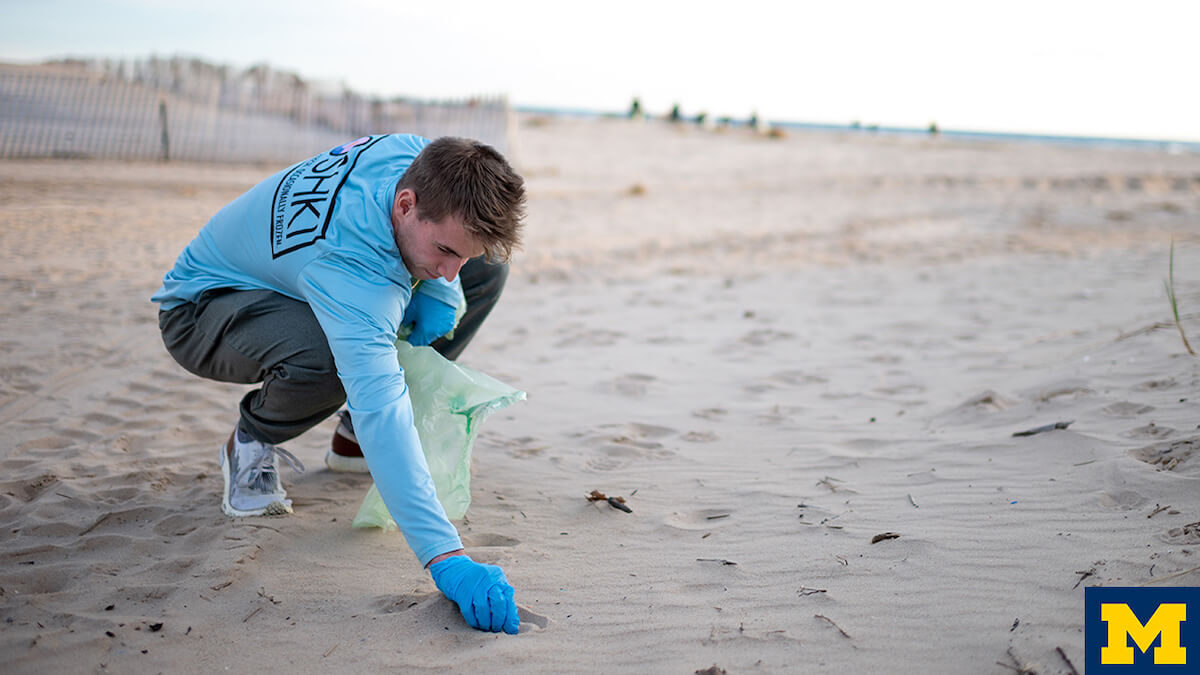 For decades, photographer Marc Hoeksema has watched as more and more plastic and trash washes up on Great Lakes beaches.

“It seems like an infinite amount of plastic particles and garbage on the beach. I don’t want to be swimming in plastic, living in plastic. Aesthetically, it’s horrible to look at,” said Hoeksema, who grew up in the Muskegon area. “Birds, fish consume it, they die or it gets into the bloodstream. We consume them, it gets into our bloodstream. It’s bad, but it’s hard to control.” 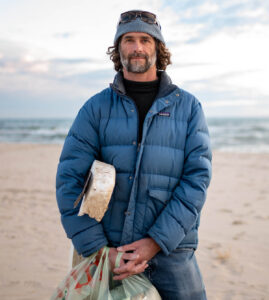 Hoeksema and a group of local residents collected 78 pounds of waste, a third of it plastic, from Pere Marquette Beach in Muskegon last October. Behind this and many other beach cleanups in the area was University of Michigan student Jackson Riegler.

Besides conserving the beaches, the 19-year-old is turning the collected plastic into sustainable clothing. Riegler’s company Oshki (which means “fresh” in Native American Ojibwe) uses 100% U.S. plastic to produce clothes.

“It’s our duty as beach communities all around the Great Lakes to be a huge part of this cleanup process,” he said. “I grew up by the shores of Lake Michigan in Muskegon and really wanted to do something to help preserve our water.”

“What we do in the next few decades will shape the future of the human species.”

Riegler, a sophomore studying economics and environmental science at U-M, started the company in 2017 with the ambition to shift the fashion industry and help preserve the coast of Lake Michigan. He was a junior in high school and became aware of issues such as natural gas pipelines, invasive species, plastic waste and $3 million in federal budget cuts for the Great Lakes.

Earlier this year, Riegler launched the 1:1 Tee—named with a specific mission in mind: to prevent the World Economic Forum prediction that the earth’s waterways will have a 1:1 ratio between fish and plastic by 2050. 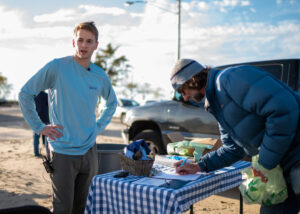 “This threat to the environment and to the lakes that I have always been passionate about inspired us to name this collection,” Riegler said. “It is our commitment to end this possibility. What we do in the next few decades will shape the future of the human species.”

Oshki has sold about 1,200 T-shirts this year. The company, which now has two employees, donates 5% of all profits to nonprofit groups like the Alliance for the Great Lakes, Michigan Initiative and FLOW, groups working to preserve the Great Lakes.

The short-sleeved shirts are a 50-50 blend of polyester and cotton. Recently, it launched the limited edition: 1:1 Ocean Performance long-sleeve shirt. He was able to buy the inventory to start Oshki with help from a U-M organization.

The capital—$9,000—came from optiMize, a U-M student-led organization that offers mentorship and funding for students to create projects that make a positive impact. 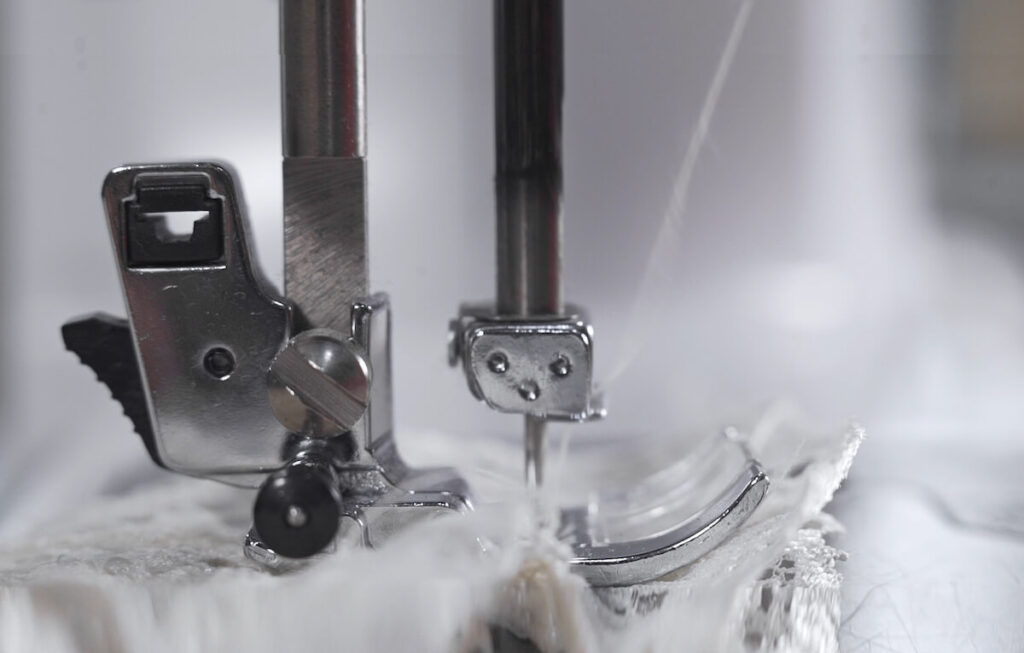 Oshki has sold about 1,200 shirts this year

“I think a lot of students come to the University of Michigan with a real desire to make a positive impact on the things that they care about, things in their communities and their state,” said Jeff Sorensen, who co-founded optiMize in 2012. “It’s really difficult to do if you don’t have support.”

Besides optiMize financial resources and mentorship, Riegler has been expanding his knowledge in the classroom, where U-M students can find different resources to get involved and supported around environmental issues.

Sara Soderstrom, assistant professor of organizational studies and Program in the Environment at U-M, is one of his mentors.

“We see student leaders, whether that be in the classroom applying class projects or through their student organizations—and other of leadership—working with and pressuring the university to do more around sustainability,” she said. “And with the challenges that we’re facing, seeing the University of Michigan as a space for action and engagement is fabulous.” 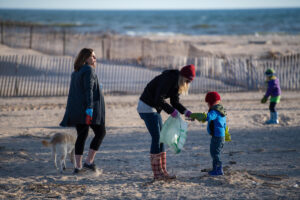 “What we do…will shape the future of the human species.”

This year, the company collected around 120 pounds of plastic from the Great Lakes, setting a 2,000-pound goal for 2020. Not all the plastic needed to create Oshki’s product line is collected from the area yet, but the company wants to eventually get to that point. The rest is sourced from other areas in the country.

Oshki’s supply chain exists entirely in the United States, from resource extraction to packaging to final product. Based in Yadkinville, North Carolina, Repreve is the company responsible to help Oshki transform plastic in clothing.

Riegler is mindful of problems with the rise of microplastics in the environment and the company is looking into the washing process of synthetic fibers, as polyester sheds hundreds of thousands of tiny particles known as microplastics. These particles are difficult to filter out. 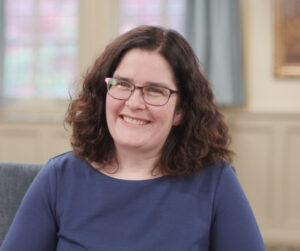 “Temporary solutions to this issue have come to market as research on this issue has heightened including wash bags and lint filters,” Riegler said. “These solutions can temporarily halt a long term issue that researchers have more recently uncovered and in the long term, we are looking into other solutions.

Riegler is already working on the company’s new line of fully recycled clothing, including womens’ leggings and men’s shorts.

“At the University of Michigan, there are in fact a lot of people working to make a better world, make a more just and sustainable world,” Riegler said. “Interacting with those people, it really inspires you and it motivates you to act in your own way and make your own impact.”