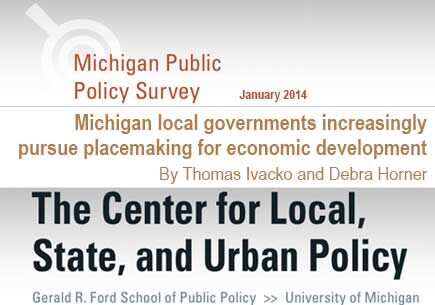 Approximately 37 percent of jurisdictions in the Upper Peninsula were likely to pursue “placemaking” as an economic development strategy in 2013, and more than a third of local jurisdictions in Michigan reported using placemaking up from 21 percent in 2009, according to a poll by U-M’s Ford School of Public Policy.

Placemaking is a community and economic development strategy that attempts to capitalize on local assets to create appealing and unique places where people want to live, work, and play.

Deena Bosworth, director of governmental affairs for the Michigan Association of Counties, said counties across the state have unique characteristics and resources to offer both businesses and individuals.

“By partnering with our local units of government, we can help to achieve the placemaking goals we are all striving for,” she said. “Not only will working together enhance communities across the state, but it will help to fuel Michigan’s economic future.”