DOUG ARMSTRONG
FOUNDER, NORTH STAR REACH CAMP
Summer camp in Michigan is almost a rite of passage for most kids.

AND U-M PROVIDED IT

[Armstrong]
North Star Reach is a camp for children with serious health challenges.

PATRICK SMITH
DIRECTOR OF CAMPING
NORTH STAR REACH CAMP
What we really are is a place where kids can grow and develop.

ANGIE MAY
MADISON’S MOM
People of all abilities should have opportunities that everyone else gets to experience.

[Smith]
And so that’s why we’re really excited to be able to offer that kind of an opportunity.

OPPORTUNITIES FOR KIDS
TO GO TO SUMMER CAMP
AT NO COST

THE CAMP SERVES KIDS
WITH CHRONIC AND
LIFE-THREATENING
HEALTH CHALLENGES

AMI WALSH
COMMUNICATION DIRECTOR
NORTH STAR REACH CAMP
Every facility accommodates a wheelchair. Every cabin is paired with a nurse and that nurse knows exactly what those campers need.

[Armstrong]
For the kids, they get a chance to, for the first time, to sit in a room with kids who’ve gone through a similar challenge.

ZACH
CAMPER
NORTH STAR REACH CAMP
Everyone at camp has like something different. Everyone there is unique.

NOAH
CAMPER
NORTH STAR REACH CAMP
I thought I was the only one with seizures and when I came here I was very shocked and I was like “Wow, like I’m not the only one.”

PARENTS GET TO TAKE
COMFORT THAT THEIR CHILDREN
ARE TRULY SAFE

KIDS GET TO:
SWIM
FISH
CANOE
PLAY GAGA BALL
AND PERFORM ON A STAGE

ANGIE MAY
MADISON’S MOM
We spend so much time worrying about our daughter Madison. Here she gets to come and just be herself and live a kid-like life.

[Armstrong]
We started 2016 with just under 300 campers served and we’re going to be close to a thousand this year.

VOLUNTEERS FROM U-M
& OTHER HOSPITALS
PROVIDE CARE
FOR THE CAMPERS

AMI WALSH
COMMUNICATION DIRECTOR
NORTH STAR REACH CAMP
In the same way that the campers wait a whole year to come back, the medical staff wait a whole year because it’s what gives them joy. It reminds them why they do the work that they do.

[Walsh]
Just kids being kind to other kids.

FOR ALMOST 100 YEARS,
THERE HAVE BEEN
U-M CAMPS
ON THIS LAND

ALL OTHER OPERATING COSTS
ARE COVERED BY
GRANTS & DONATIONS

[Smith]
Ultimately, I think the impact that the University of Michigan and the health system has had, was being a part of creating a legacy.

[Armstrong]
They really bought into the long-term vision that this project needed to serve all kids.

CHRISSY DAVIS
ZACH’S MOM
They look forward to it every year.

DOUG ARMSTRONG
FOUNDER, NORTH STAR REACH CAMP
Once you show the child that they’re capable of more than they thought, you’ve given them the keys to their future and the possibility of, of the rest of their life, opens up before them.

MADISON
I’m really proud to be who I am and—thanks guys. 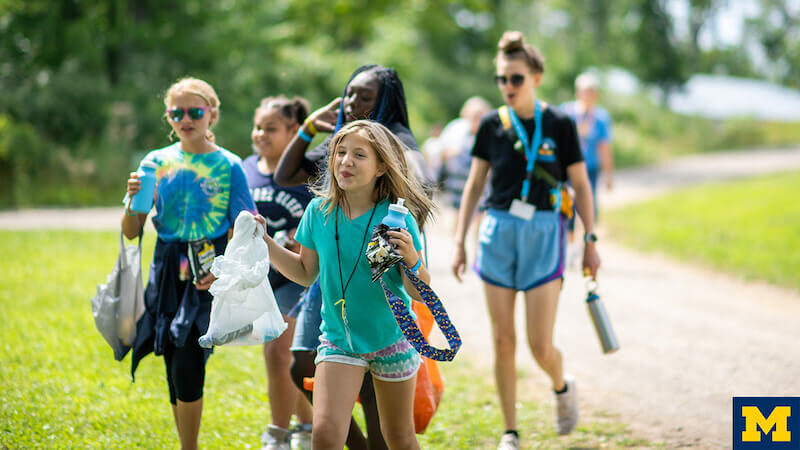 Ten-year-old Madison May forgot all about being sick as she twirled on stage, microphone in hand in a gold, glittery dress as hundreds of campers, counselors and volunteers gathered in the outdoor amphitheater.

In many ways, North Star Reach in Pinckney, located on picturesque property owned by U-M and founded by a Michigan Medicine transplant nurse in 2016, is no different than other traditional summer camps with lake access, swimming pools, campfires, cabins and bonfires and activities that teach and bond. 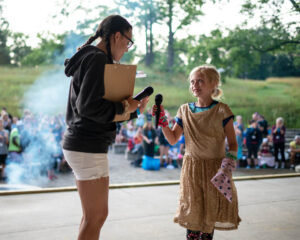 What is different is the medical support provided to campers. At the heart of it is the Observatory, a state-of-the-art health center. It includes a dispensary, observation rooms and treatment area, where campers can receive urgent, emergent and routine pediatric care, including dialysis and chemotherapy. Nurses are paired with each cabin and know exactly what the children need.

“We spend so much time worrying about our daughter, Madison. Here she gets to come and just be herself and just live a kid-like life,” said Angie May, of Rochester Hills. 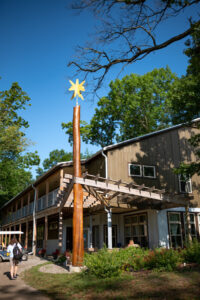 Her mom is grateful summer camp is an option for Madison like it is for so many other kids.

“People of all abilities should have opportunities that everyone else gets to experience,” she said.

That means eating spaghetti and meatballs with no hands, telling stories around campfires, swimming, fishing, shooting arrows at balloons, performing on stage and much more.

The last session of the 2019 season wraps up in November with an important milestone: Nearly 1,000 camp experiences, and countless memories, were granted to children with serious health challenges and their family members this year.

Attendance has increased every year since the camp opened in 2016, when just under 400 campers visited the lakefront land purchased by U-M for nearly 100 years ago and used for other camps throughout the years.

“We spend so much time worrying about our daughter, Madison. Here she gets to come and just be herself and just live a kid-like life.”

Angie May, mom to 10-year-old camper, Madison May

In three years since North Star Reach opened, nearly 3,000 campers and their families have swapped intense medical routines with fun. Hundreds of volunteers, including cabin counselors and medical staff—and even former transplant patients who are now old enough and healthy enough to help campers—join in the fun each year. Plans for 2020 are to grow even more, said Ami Walsh, communications director for North Star Reach and a camp volunteer.

“In the same way the campers wait a whole year to come back, the medical staff can’t wait to come back. It’s what gives them joy. It’s what reminds them why they do the work that they do,” Walsh said. 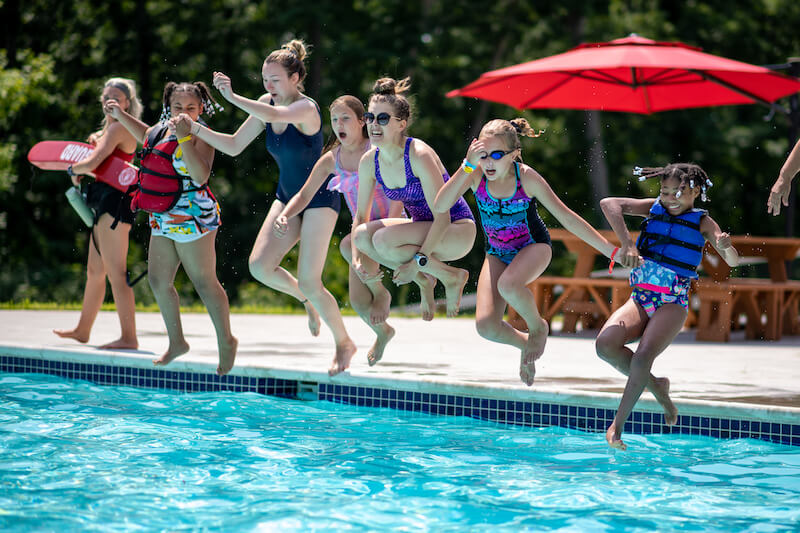 North Star Reach campers come from across Michigan and other Great Lakes states. In Michigan, the camp pulls from Alpena, Ann Arbor, Traverse City, Detroit, Flint, West Bloomfield and cities in between.

The medical staff come from across Michigan and the Chicago area to tend to campers’ daily medical needs, and are on standby for more serious medical care. U-M donates the medical supplies that help to stock The Observatory, the camp’s Health Center, which is designed to fit right into the camp setting. There are also two suitable landing locations for Michigan Medicine’s Survival Flight, the critical care transport program that provides rapid and safe transport of critically ill and injured patients of any age group. 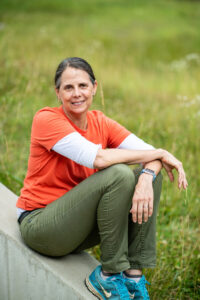 What’s also different is that camper families pay nothing for a camp that might otherwise cost about $2,500 for a child to attend a single session. Donations and grants cover the cost. It’s a gift to families are often already burdened with medical bills, and for parents and physicians not always comfortable letting kids stray too far.

Overall, North Star Reach is an experience that leaves the kids with what for many are typical and beloved childhood memories. It also leaves them with achievements, first-time experiences and new friendships.

“What we really are is a place where kids can grow and develop,” said Patrick Smith, director of camping.

“They look forward to it every year,” she said.

Tisha Wowianko, mom to Noah, said both the children and parents learn and grow from camp.

Noah, 15, from Jackson, loves making friends with other kids with epilepsy. 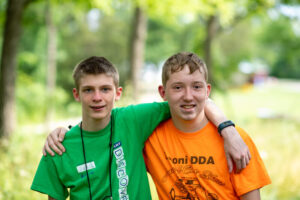 “I thought I was the only one with seizures, and when I came here I was really shocked. I was like, ‘Wow, I’m not the only one,'” he said.

For doctors, nurses and other care providers it’s meaningful to see patients outside the medical setting.

North Star Reach is all about providing kids with what founder and CEO Doug Armstrong deems a rite of passage and source of the best childhood memories. 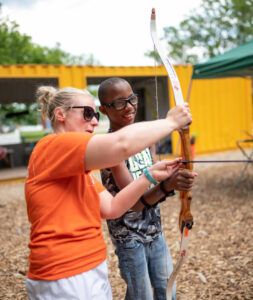 It was Armstrong who led an effort to convince U-M to lease the land for the camp. For Armstrong, who witnessed the stress and departure from normalcy for families affected by transplants when he was a nurse at the U-M Transplant Center, it was critical to give the kids a camp experience.

In 2011, U-M agreed to lease the land for $1 a year. Armstrong said supporters at U-M “really bought into the long-term vision that this project needed to serve all kids.”

Armstrong headed up the fundraising campaign that raised $23 million to rebuild the camp into North Star Reach. The old camp facility wasn’t salvageable, so North Star Reach was uniquely designed from the ground up. In addition to climate-controlled cabins, there is a fully accessible treehouse and heated, zero-depth swimming pools. The entire camp is wheelchair accessible. 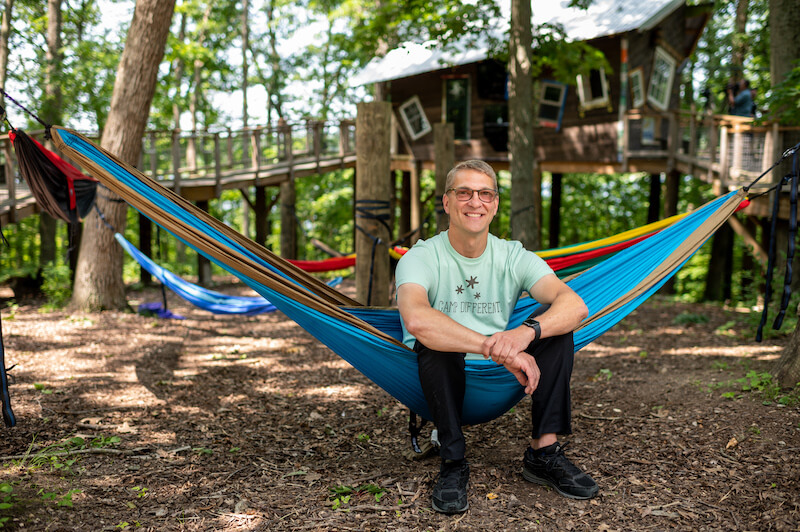 But camp is about focusing on fun and the campers seeing other sides to themselves, Armstrong said.

“Once you show the child that they’re capable of more than they thought, you’ve given them the keys to their future,” he said, “and the possibility of the rest of their life opens up before them.”