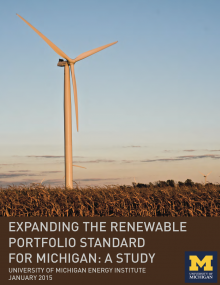 Earlier this year, U-M released a study analyzing the real impacts of raising Michigan’s Renewable Portfolio Standard – the policy mandating the percentage of the state’s electric generation capacity that must be provided by renewable power.

The study, sponsored by the U-M Energy Institute, analyzes several scenarios, detailing the changes to different power generation sources such as coal and natural gas, the environmental benefits to the state, and the associated costs under each.

Changing the state’s Renewable Portfolio Standard (RPS) would raise a typical Michigan household’s utility bill and would also change the state’s output of carbon dioxide, sulfur dioxide and nitrogen oxides, which are associated with climate change, acid rain, and asthma.

In the three RPS expansion scenarios examined, the state’s carbon intensity of power generation is reduced by 13 percent, 20 percent, and 33 percent, respectively. At present, more than half of Michigan’s power comes from coal, and the state’s asthma rate is higher than the national average.

“We hope that with this study, we can provide a neutral, unbiased view of what such an expansion would mean for Michigan’s energy future and environmental footprint,” said Jeremiah Johnson, U-M assistant professor of Natural Resources and the author of the study.