Building robots and a better future in Detroit: More young people are getting hands-on tech experience at the Michigan Engineering Zone

MICHIGAN HAS THE MOST
HIGH SCHOOL
ROBOTICS TEAMS
IN THE NATION

IN THE PAST,
MANY DETROIT SCHOOLS
HAD TO WATCH
FROM THE SIDELINES

Some of my students don’t know anybody successful outside of school.

I pretty much got thrown into robotics class.

I did not want anything to do with robotics at all.

First Robotics is an international organization and the purpose actually is to get students excited about STEM, especially through building a robot.

A lot of the robotics teams didn’t have mentors or supplies or anything they needed to really create a successful team.

AT MEZ,
STUDENTS HAVE ACCESS
TO TOOLS AND SUPPLIES

Our mentors from the College of Engineering, many of them were on First Robotics teams when they were in high school.

We work together on designs a lot, prototyping really going through the design process over and over.  Designing something, building it, testing it.

NEARLY 2,800 STUDENTS
HAVE TAKEN PART
IN THE PROGRAM

They have just opened up the doors to supporting our kids with tutoring, robotics, life skills.

They’ve brought in retired engineers to run and support and show our kids that they’re worth it.

ALL SENIORS
WHO PARTICIPATED
LAST YEAR
WENT ON TO COLLEGE

Those are the results that we’re looking for and we’re really working toward building the self-confidence of these students.

MEZ HOPES TO INSPIRE
A WHOLE NEW
GENERATION OF TALENT

I fell in love with engineering.

I want to go to engineering school and become a mechanical engineer and then become a businessman because that’s my dream. 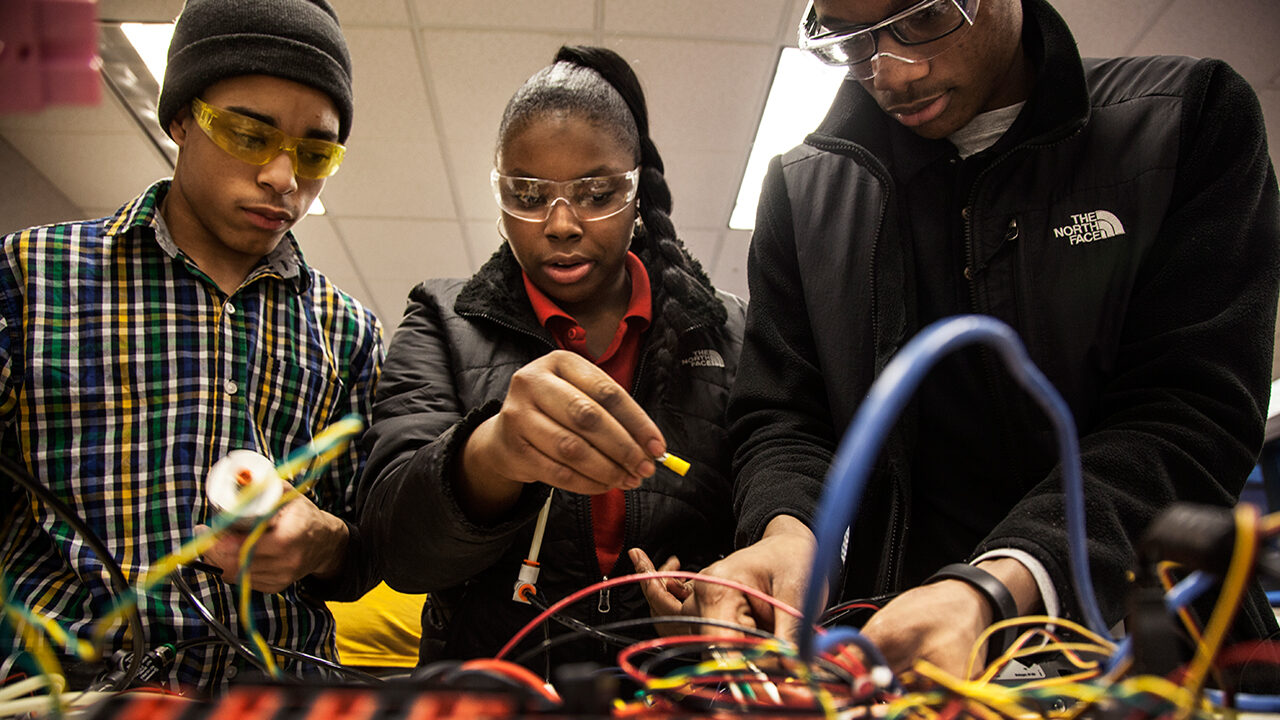 He was a sophomore at what used to be Finney High School on the city’s west side—now East English Village Preparatory Academy. He was good at math, but didn’t really know how to put that skill to use—until he visited the Midtown makerspace for robot-building. 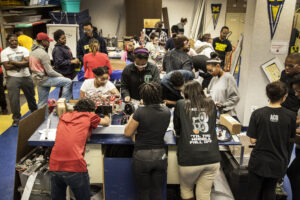 The MEZ is a safe and supportive forum where Detroit students can acquire the knowledge and tools they need to propel themselves to higher education and STEM careers. Photo by Marcin Szczepanski, College of Engineering

“From that day on, I was hooked,” Durrah said. “It started off with me realizing that I can be an engineer—that I do have these critical thinking skills that can be developed.

“Growing up, I didn’t have much exposure to engineering, or individuals who were telling me to go to college and pursue a higher education.”

Durrah is among the more than 2,800 Detroit-area high school students who have been helped by the Michigan Engineering Zone, or MEZ, since the University of Michigan opened it in 2010. At the center, students explore their interests and grow their abilities in science, technology, engineering and math. 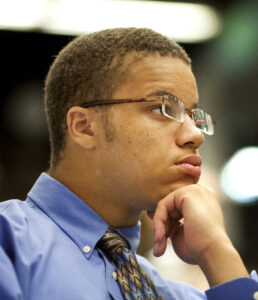 Offerings at MEZ expanded in 2018 through a partnership with Qualcomm and a second $250,000 grant from Google to include a program for middle school students and more workshops for high schoolers. At the Qualcomm Thinkabit Lab, about 3,000 Detroit middle school students had a chance to be engineers for a day through a one-day immersion program designed to introduce them to science and technology.

Located at the U-M Detroit Center on Woodward Avenue, MEZ mainly offers space, help and machine tools to young people who want to take part in the national FIRST Robotics competition, but whose schools don’t have the resources to help them on their own.

“It was created to address and respond to the need to prepare students in Detroit for the science, technology, engineering and math workforce,” said Jeanne Murabito, executive director for student affairs at the U-M College of Engineering and founder of MEZ. “A lot of the robotics teams didn’t have mentors or supplies or what they needed to really create a successful team.”

Now MEZ hosts 19 teams per year, and more than 350 high school students for the FIRST season. Through an agreement with the school district, many students are bussed to and from the work space. And corporate sponsors have made it possible for MEZ to feed them dinner. 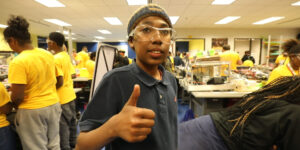 “They have just opened up the doors to supporting our kids with tutoring, robotics, life skills. They’ve brought in retired engineers to support and show our kids that they’re worth it,” said Pashawn Johnson, principal at Osborn High School.

Like Durrah, Howard Williams Jr., a student at University Preparatory Academy, also found a love of engineering at MEZ.

“It don’t matter what you don’t know. It matters what you’re willing to learn. That’s the environment the MEZ sets for a person right off the bat coming in the door,” said Williams, who was a student there last year. 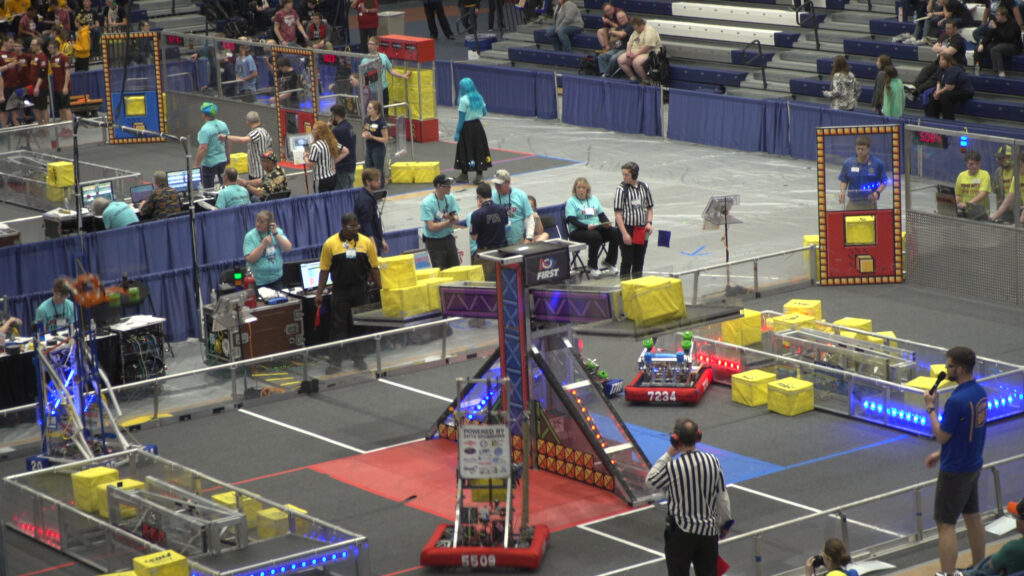 To him, one of the most important things MEZ offers is mentoring. Eighty professional engineers and more than 35 engineering students from U-M spend their afternoons and evenings there during building season in January and February.

“They have just opened up the doors to supporting our kids with tutoring, robotics, life skills…and show our kids that they’re worth it.”

Many of the U-M students are MEZ graduates themselves. MEZ tends to be a pipeline to college, and in many cases, U-M. Five from last year’s MEZ cohort came to U-M. All of them received free tuition through the Go Blue Guarantee, which promises free tuition to low-income students who qualify. 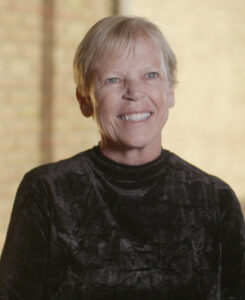 “I find joy in helping others who who come from a similar upbringing as I did,” said Wayne Lester, a Cass Tech grad who finished a master’s degree in space systems engineering at U-M this year and now works at Lockheed Martin in Washington, D.C.

“We work together on designs a lot—prototyping, really going through the design process over and over, designing something, building and testing it.”

And later this winter and spring, they’ll put their robots to the test. The first regional competitions happen in late February. And for the second year in a row, the championship will be held in Detroit April 24-27. Its location will move in 2020.

The state of Michigan leads in participation, with 15,240 students on 508 teams in 2018. That’s the most high school robotics teams of any state in the U.S. 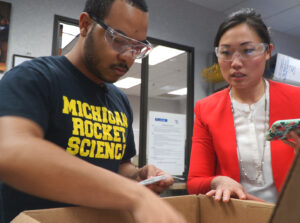 While these students compete at Cobo Center, Durrah will be putting his math and engineering skills to work just down the road.

And he’s proud of the example his MEZ-fostered degree in computer science and engineering is having on his younger siblings.

“Now they see this is something they can do to,” he said. “And all five of them are on the right track.”