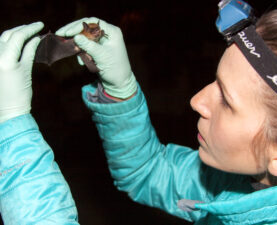 A new study from University of Michigan biologists presents the first genetic evidence of resistance in some bats to white-nose syndrome, a deadly fungal disease that has decimated some North American bat populations. The study involved northern Michigan populations of the little brown bat, one of the most common bats in eastern North America prior to the arrival of white-nose syndrome in 2006. Since then, some populations of the small, insect-eating bat have experienced declines of more than 90%.