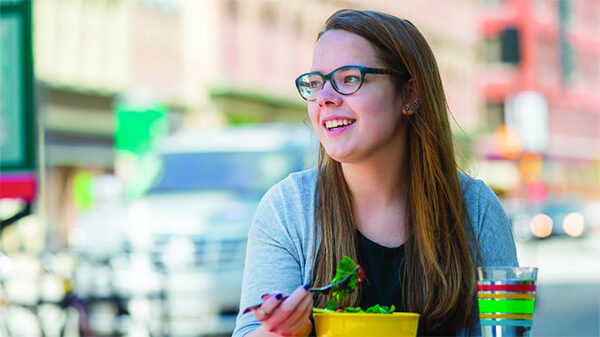 Morgan Blenkhorn missed high school several times because of symptoms that doctors said were related to irritable bowel syndrome. Her symptoms started a few months after a severe food poisoning incident in 2010 during her junior year of high school. She endured pain, particularly while dancing and playing soccer.

Blenkhorn’s first visit to U-M was in 2013, during the fall of her sophomore year of college. She had several blood tests done before meeting with gastroenterologist Dr. Chey. Upon her first appointment with him, she was promptly told what to expect: a fructose test, a lactose test, more blood tests and an endoscopy.

Blenkhorn is finishing up her fourth year at Grand Valley State University in Allendale, Mich., with another year left to complete her special education degree. She hopes to be accepted into Grand Valley’s Consortium for Overseas Student Teaching program in Ireland – something she couldn’t have considered before getting control over her IBS.