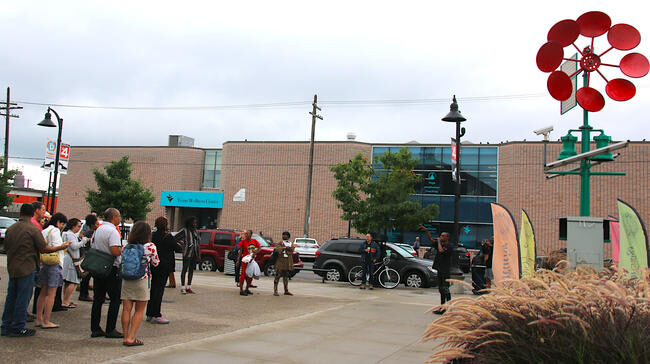 Local artist Bryce Detroit calls himself an advocate for entertainment justice.  And if you walked by Eastern Market’s Shed No. 5 earlier this month, you’d get why.

He was riffing on sustainability, creativity and collaboration.

Appropriate topics given his microphone and speaker system were powered by a wind turbine, which was fueled by the ingenuity of Detroit resident Carl Nielbock, who was empowered in part through the efforts of UM-Dearborn faculty.

Bryce Detroit’s performance was the first of many events the self-powering entertainment station will support. There’s even a use for those who aren’t looking to speak on it: The turbine, affectionately referred to as the Detroit Windmill by Nielbock, will power wireless internet servers and USB-port charging stations for public use.

Nielbock said the assistance given to him by University of Michigan-Dearborn faculty has pushed his Green Energy Village concept  — rows and rows of energy-generating wind-turbine and solar panel-equipped sculptures — to a near reality on Detroit’s east side.