By 2021, 15% of Michigan’s energy is expected to come from renewable sources, generating nearly $6.3 billion in revenue for local communities.

As more communities consider the pros and cons of wind farms, University of Michigan research helps them access accurate information.

Bill Renn: It is a very emotional subject.

Sarah Mills: There are so many opinions on either side of wind development, and what I’m trying to provide is fact based information that sorts out the real impacts.

In 2012, U-M began looking into the impacts of wind farms in Michigan.

Sarah Mills: I was hearing again and again from local officials that it was really hard to get non-biased information. What I received some funding to do is go around the state and talk to communities who are considering wind development about the pros and cons.

Sarah has worked with 24 communities across the state as they determine what’s best for their future.

Heather Stewart: As we had wind energy companies wanting to come into the community, the fears started that there would be noise, that they’d be visually ugly to look at. We needed unbiased information. Sarah did interviews in other parts of the state. It gave us a lot of facts and truth based on what people really experience when they’re living near turbines.

Greenwood Township decided to increase restrictions on wind turbine use, and has moved their focus to developing solar energy in their township.

In the Thumb, Chandler Township had already begun building turbines, but had to make many decisions around their future in wind energy.

Bill Renn: We started hearing all kinds of internet stories. More and more were unfounded. Sarah Mills came up, just passing along the facts. The assistance of data allowed us to make decisions for our future.

Chandler Township now has 87 wind turbines, and the land leases are helping to sustain family farms.

Bill Renn: The turbines help stabilize our future in agriculture. We also saw a dramatic increase in our tax revenue. It’s allowed us to improve our roads, to provide garbage pickup, and we can continue to develop services for our residents.

This is just one example of the outreach done by U-M’s Center for Local, State, and Urban Policy (CLOSUP).

Sarah Mills: It has been so uplifting when people say “We’re so glad University of Michigan is here, bringing the kind of research that goes on on campus to rural communities.” 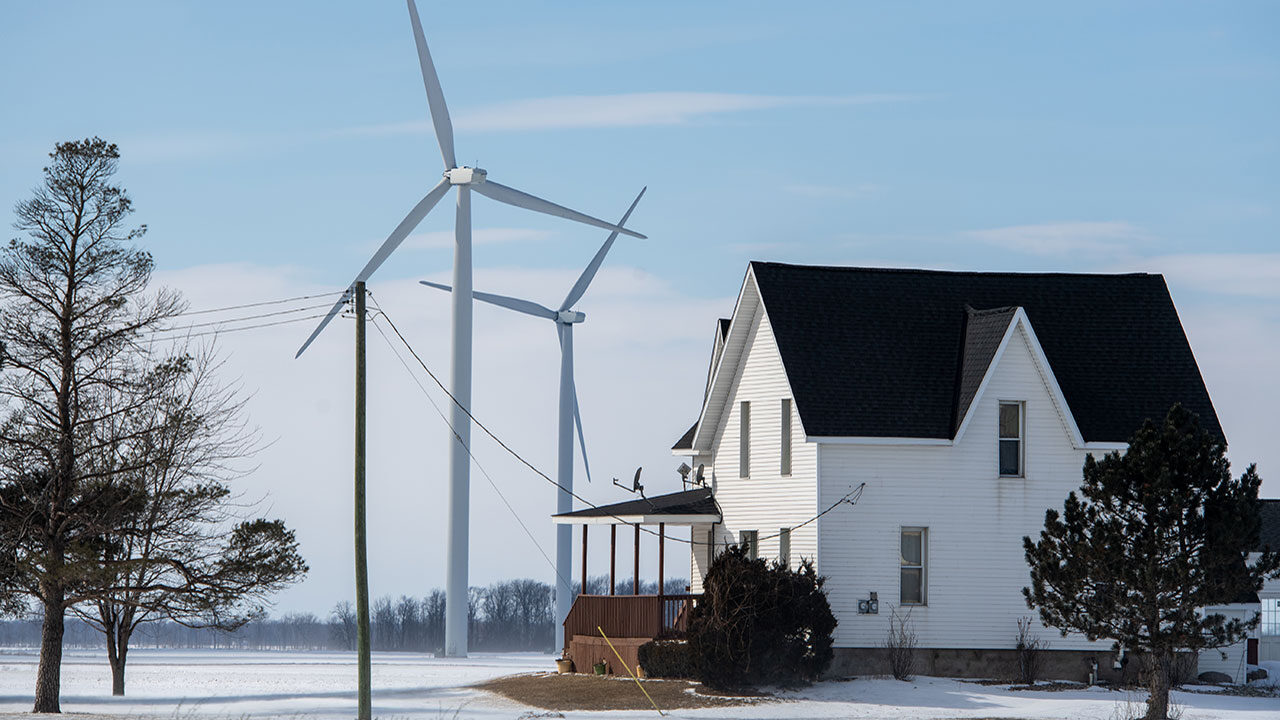 When officials in Chandler Township, located in Michigan’s thumb, first started talking about building turbines, their initial search for information took them to the internet. 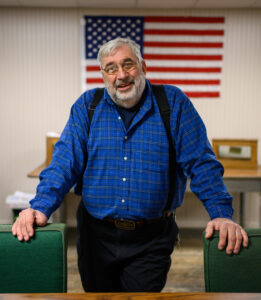 They found a lot of information but felt that much of it was biased. Some portrayed wind turbines as a nuisance, others saw them as the next best thing.

“There were a lot of half-truths in those reports,” said Bill Renn, Chandler Township supervisor.

To counter that information, the Huron County township turned to University of Michigan researcher Sarah Mills, a senior project manager at the U-M Ford School of Public Policy’s Center for Local, State and Urban Policy.

“We started hearing all kinds of internet stories. More and more were unfounded,” Renn said. “Sarah Mills came up just passing along the facts. The assistance of data allowed us to make decisions for our future.” 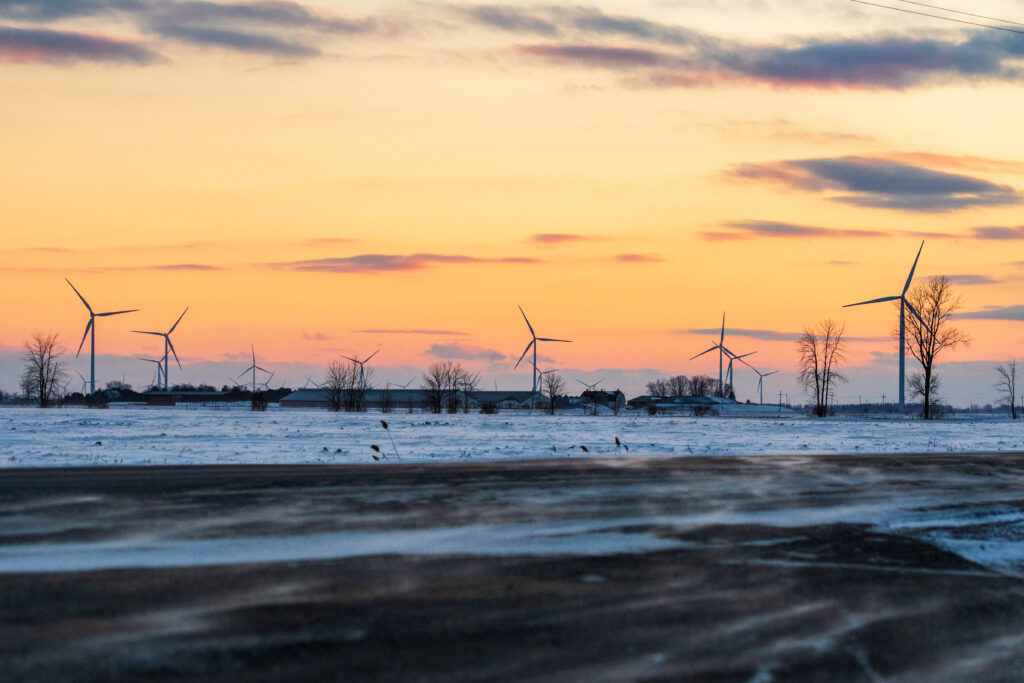 Mills has studied the impact of wind turbines on Michigan communities since 2012 through CLOSUP, which works on a range of issues affecting local governments in Michigan. They have also researched poverty, housing shortages and local government funding from the state government, reaching all 1,856 counties, cities, townships and villages across Michigan.

Mills’ research gave Chandler Township a more complete picture of how residents felt about wind-energy farms in the area. 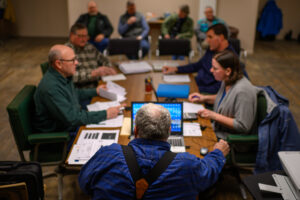 “What I am trying to provide is a neutral voice with information specific to Michigan,” Mills said. “I am able to give them a nuanced look that all energy sources have a tradeoff. It’s better to go into these long-term decisions with eyes wide open.”

Mills’ research on wind energy has an angle that’s different from the energy sustainability perspective. She focuses on the impact of wind turbines on communities in Michigan.

By 2021, 15 percent of Michigan’s energy will come from renewable sources, creating statewide economic impact of $6.3 billion. The wind turbines in the state have steadily grown since 2008, when the first turbine was set up. Michigan is now home to 1,100 wind turbines.

“Sarah Mills came up just passing along the facts. The assistance of data allowed us to make decisions for our future.”

Since her research began, Mills has spoken to 24 communities across Michigan. Most were approached by a wind developer and were trying to decide if this would be right for their community. Mills presented her research to these communities to give them a full picture of the impact of the turbines.

“A lot of these rural communities don’t have a big research or planning staff,” she said. “And there aren’t a lot of information sources that give both sides of the picture.” 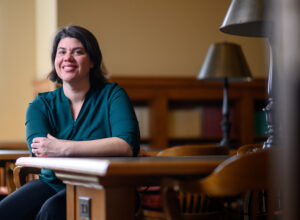 Last year, officials in Greenwood Township in St. Clair County approached Mills when they were in the middle of a decision about establishing wind turbines in their township.

“Sarah Mills came to our meeting and had answers from surveys of communities with and without wind turbines,” said Heather Stewart, chair of the Greenwood Township Planning Commission.

Mills, who grew up on a farm in Monroe County, says wind turbines are not for every community.

After considering all research, Greenwood Township decided to update their wind turbine ordinance to discourage wind development by requiring developers to keep turbines at least 2,000 feet away from neighboring property line, and focus instead on solar energy development. 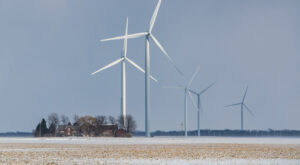 The Chandler turbines helped spur a 4,400% increase in tax revenues

On the other hand, Chandler Township decided to allow construction of wind turbines in their community. They now have 87 wind turbines and have used revenues from it to improve roads and introduce garbage collection for the community.

Mills finds it incredibly rewarding to take her work to communities across Michigan.

“It has been so uplifting to hear, ‘We’re so glad that the University of Michigan is bringing the kind of research that goes on on campus to rural communities,'” she said.