Did you know Michigan farmers receive less than 20% profit on goods they sell?

These two University of Michigan alumni started a business that returns 75%.

Dave Steinhauser: When you market through Argus and get 75%, you have a real good chance to make a fair living.

Kathy Sample: We hope to make it easier for a small farmer to have a sustainable life.

Bill Brinkerhoff: And we also wanted to make shopping for local food easier,
and when you see the joy that people have in shopping that way and eating that way, that’s a tremendous feeling.

Bill Brinkerhoff and Kathy Sample met at the University of Michigan in 1989. In 2013, the couple decided to start a business together.

Bill Brinkerhoff: The University of Michigan was such a foundation. All of the functional areas that you need to start a business – accounting, information systems, human resources – we really had to bring those skills back when we started Argus.

Kathy Sample: Argus Farm Stop is an all year, every day farmers’ market that makes it easier for consumers to find local produce.

Bill Brinkerhoff: We’re having around 600 people shop at Argus every day. When you’re eating locally, you’re eating fresher. You’re eating something that was harvested within a day or two.

Argus partners with 200 farms across the region and state throughout the year.

Dave Steinhauser: On our farm, it has provided the outlet that I was looking for. And so I’m going to expand garlic production this year a little more again because it’s selling.

Bill and Kathy aim to foster community between farmers and consumers.

Bill Brinkerhoff: Any day of the week, if you’re here for a half hour, you’re going to see a farmer and have a chance to talk to them.

Dave Steinhauser: Several times I went there, people are saying “I’ve enjoyed your ground beef” or “I’ve been buying your garlic for years.” It makes you feel good that people are happy with what they’re getting.

And they share their expertise and experiences with U-M students.

Bill Brinkerhoff: We love benefiting from our relationship with the University of Michigan. Classes sometimes come and visit here. We give guest talks at the University.

Kathy Sample: We like to be involved with the campus farm because they sell things here.

Bill Brinkerhoff: Argus has over 40 employees now, and about 15 of that staff are current or former U of M students.

Argus continues to help strengthen the agricultural economy and community in the region.

Bill Brinkerhoff: We’ve been open now just over four years, and have returned over $4 million to the local food economy. Our hope is to make this community one of the best communities available for local food. 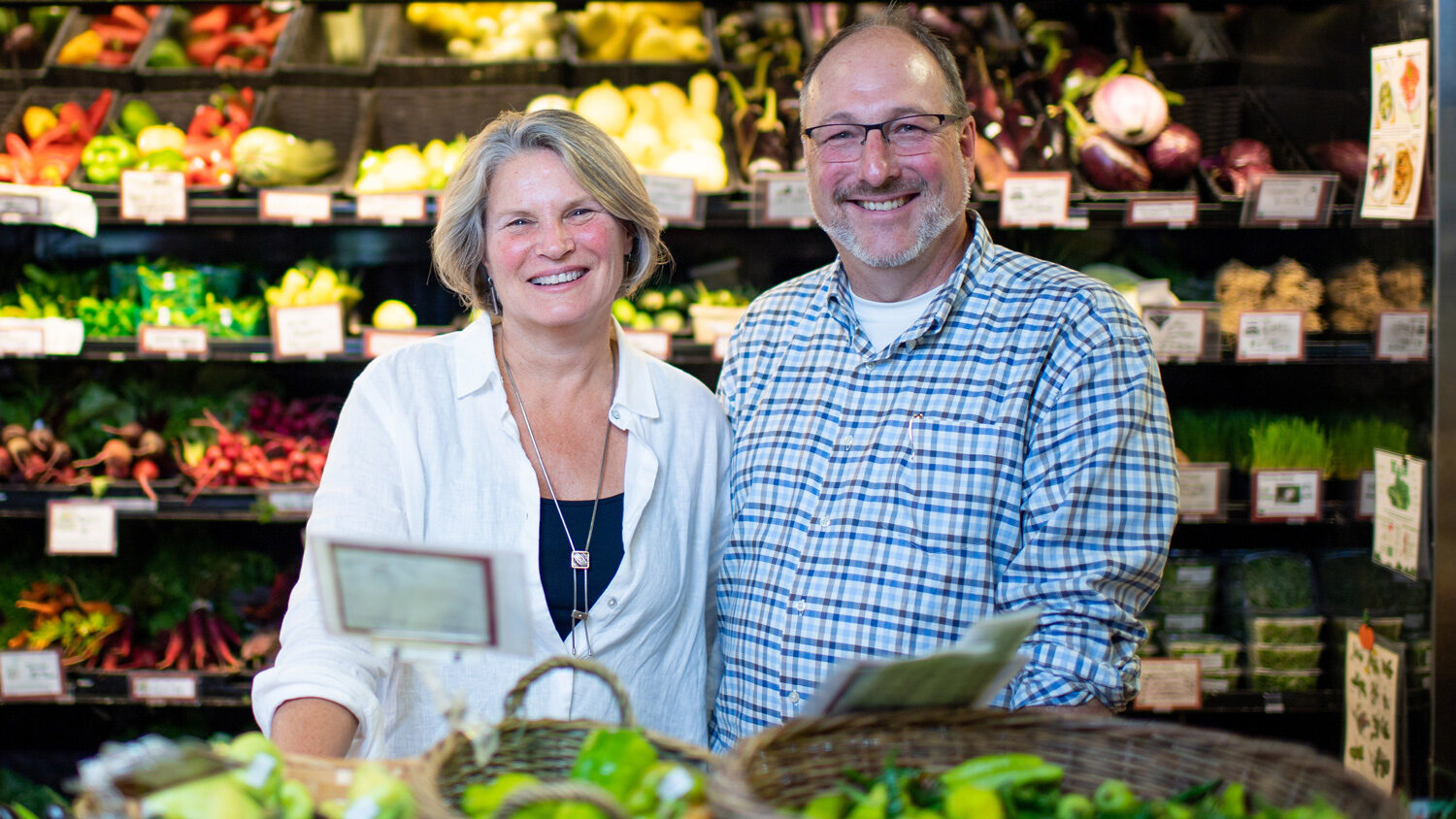 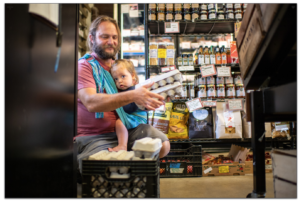 More than 600 people shop at Argus every day

ANN ARBOR—Kathy Sample and Bill Brinkerhoff envisioned their business, Argus Farm Stop, as the next generation of the traditional farmers market.

Today, Argus Farm Stop, their updated marketplace, has grown into a $4 million contributor to the local food economy since launching less than five years ago.

At the market, Michigan farmers can sell their goods seven days a week year-round at quadruple the profit typically paid by most retail outlets. Consumers can find fresh, locally grown food—and even get to know some of the asparagus growers, dairy farmers and beef ranchers during deliveries and at community events. 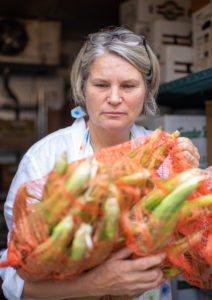 “The farmers markets are great, but they are (mostly) only one day a week, and in Michigan, most of them don’t go year-round,” Brinkerhoff said. “That was a big disconnect between fantastic producers and highly interested consumers.”

The two University of Michigan alumni, Sample and Brinkerhoff, plus their 40 employees and more than 200 farmers and food producers, serve more than 600 consumers a day. Together, they have planted the seeds for a blooming—and booming—local food and agricultural economy.

Argus, which added a second market in Ann Arbor, returns about $1 million each year to the local food economy, according to Brinkerhoff.

“Our hope is to make this community one of the best communities available for local food,” he said.

The two met in 1989 while students in the Master of Business Administration program at U-M’s Ross School of Business and later married. They relocated to the East Coast for careers and returned to Ann Arbor in 2001, where they worked in corporate settings before pursuing a more mission-based path that might leave a deeper impact on the community. 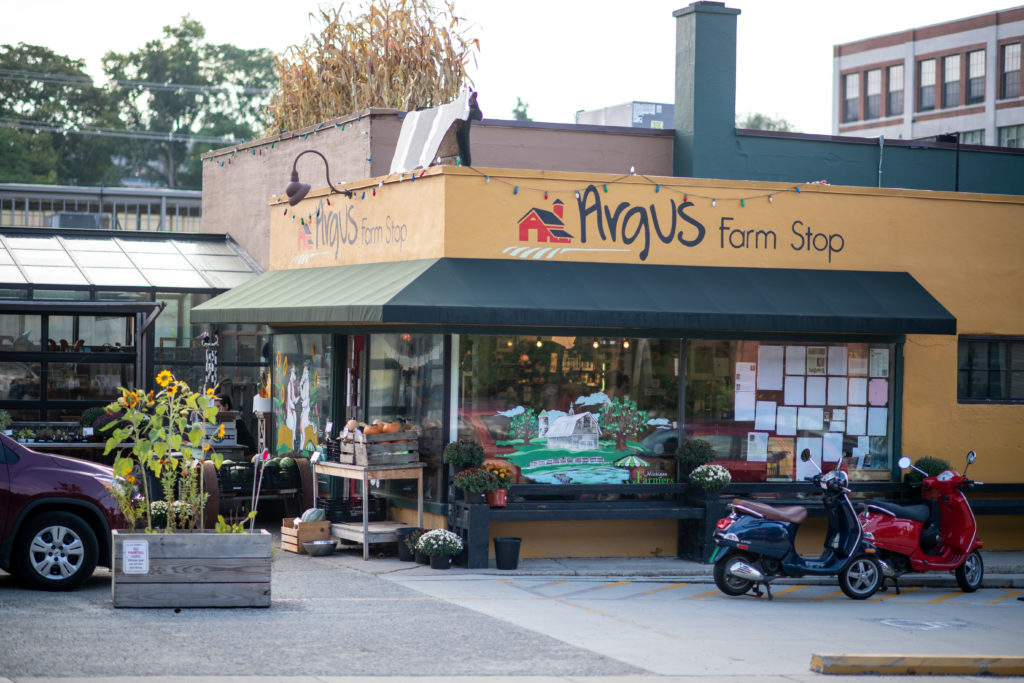 That mission was based on bringing together groups of people who needed each other: farmers and consumers who wanted locally grown products.

Brinkerhoff and Sample did some research, asking farmers and other experts if a purely local, year-round produce market could work. The answers were encouraging, so the couple and a business partner invested their own money in opening the first store in a former gas station on Liberty Street at the western edge of downtown Ann Arbor. They later added a location on Packard.

“We have a lot of talented farmers in our area and we want them to keep farming, and we also want to see new farmers succeed.” 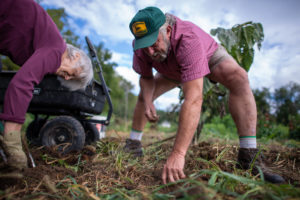 Paying farmers more for their goods—much more—is at the heart of the updated farmers market. While traditional stores pay 15-20 percent on goods, Argus pays 75-80 percent.

“This encourages them to grow more, extend seasons and to make our area a better area for farmers to farm,” Sample said. “We have a lot of talented farmers in our area and we want them to keep farming, and we also want to see new farmers succeed.”

The return rate, coupled with good sales, has prompted Dave Steinhauser, owner of Steinhauser Farms, to plant more garlic this year to keep up with demand. Steinhauser Farms also sells its beef, pork and garlic at Argus.

“When you market through Argus and get 75 percent, you have a real good chance to make a fair living” Steinhauser said. “On our farm it has provided the outlet that I was looking for.” 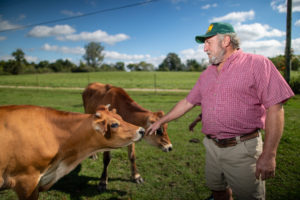 Steinhauser on his farm

Argus Farm Stop offers more steady work for farmers in part because it isn’t dependent on weather. It also gives farmers an alternative to weekend or special events farmers markets, which take them away from the farm for long stretches of time.

The cafe inside Argus sells teas, coffees, baked goods and such that in large part enables Argus Farm Stop to pay its farmers and food producers more for goods.

Besides the economic benefit for farmers and the local community, Brinkerhoff and Sample see success in the supportive community and relationships the business fosters. That includes employing locals, many of them current and former U-M students, and stocking produce from U-M’s campus farm.

The couple also return to campus to share knowledge and business lessons with students. And Argus regularly hosts events and educational outreach to anyone interested in the local food economy, and Brinkerhoff and Sample relish bringing farmers and shoppers together under one market roof.

“We also wanted to make shopping for food easier, and when you see the joy that people have in shopping that way and eating that way, it’s a tremendous feeling,” Brinkerhoff said.