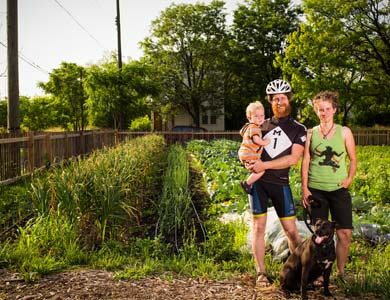 Urban agriculture isn’t a new idea in Detroit. In fact, there are those who think the city’s vacant land could be the key to its salvation, citing farm jobs, reduced municipal burden and increased tax revenue. But urban farmer Carolyn Leadley, a U-M graduate with a degree in environmental science, wasn’t sure she believed the hype.

“With so many people it’s all very theoretical and philosophical,” Leadey says, assessing her large market garden on Detroit’s east side, easily accessible to the city’s Eastern Market. The neighborhood counts about as many vacant lots as houses. “I wanted to find out, ‘Can we really do this as a business?'” Leadey found out she could succeed.

In 2011 Leadley’s Rising Pheasant Farms, which she operates with husband and fellow U-M graduate Jack Van Dyke, grossed about $34,000 as a part-time operation.